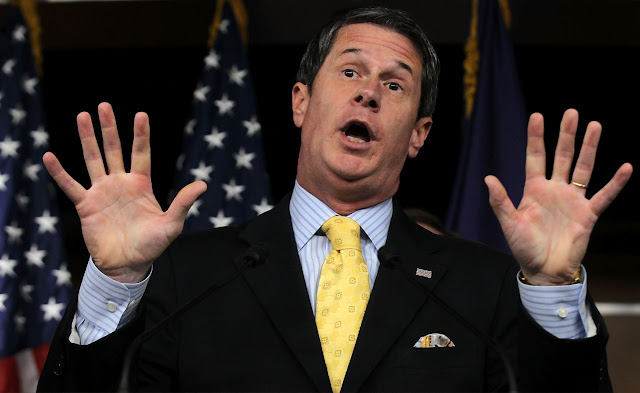 It's clear at this point that what the presidential campaign lacks, despite the presence of Donald Trump, is a good sex scandal.  But look no further than Louisiana and David "Diaper Dave" Vitter, who survived revelations in 2007 that he was a frequent flyer with prostitutes to win re-election to the Senate in 2010.  But now Vitter's "very serious sin," as he very seriously put it at the time, has come back to very seriously haunt him, and in the process possibly saved the good burghers of the Bayou State from the very serious specter of him as their governor.

Why dwell on a sex scandal since so many politicians get snared in that particular net, and what they do in their own time is none of our beeswax, or something?  Because Vitter was and remains a very serious Family Values guy, and Politix Update very seriously gags over the stench of his kind of hypocrisy, which happens to befall Republicans like Vitter much more than Democrats because Democrats are smart enough (barely) to realize that playing the Holier Than Thou game can backfire if you aren't.

In 2007, phone records conclusively linked Vitter to a Washington, D.C. call-girl operation run by Deborah Jeane Palfrey, who charged up to $300 an hour to her power-broker clients, who included a former Bush administration deputy secretary of state as well as Vitter, then 47. In the ensuing media feeding frenzy, it was revealed that Vitter liked hookers to dress him up in diapers.

It appears that Vitter's enemies in the dog-eat-dog Louisiana Republican Party resurrected the scandal, although he finds himself in the unusual position of both Republicans and Democrats wanting him to win the statehouse.  This is because Vitter, who is a loner, long ago wore out his welcome in the Republican Senate caucus, while Democrats want him to win in the hope that they can pick up his Senate seat next year.

No matter.  Now John Bel Edwards, a former Army ranger and Vitter's Democratic gubernatorial opponent, has linked the senator's Inside the Beltway frolics to his job performance in releasing a devastating TV ad declaring that Vitter was waiting for a call from Palfrey while the Senate was voting to honor 28 soldiers "who gave their lives in defense of our freedom" in an Iraqi scud missile attack in the first Gulf War.

"David Vitter chose prostitutes over patriots," the ad concludes. "Now, the choice is yours."

In a tragic footnote, Palfrey was convicted of racketeering and money laundering in 2008 and hung herself after leaving a note saying she had been the victim of a "modern-day lynching."

Vitter recently has been linked to a second sex scandal involving New Orleans prostitute Wendy Ellis, who gave an interview in 2007 to Hustler magazine, that paragon of probity, under the name Wendy Cortez alleging that Vitter was one of her customers and they had a years-long relationship.  In a recent series of videotaped interviews, Ellis claims Vitter knocked her up and demanded she get an abortion, but she put the child up for adoption.

Wait! It gets better.

Jefferson Parish Sheriff Newell Normand revealed evidence this week that Ellis' story had collided with another subplot in the governor's race: "Spygate," as some Louisiana news outlets are calling it.

Last month, Normand arrested private investigator Robert Frenzel as he fled a coffee shop after the sheriff caught him recording a breakfast meeting of the sheriff and some political pals. Frenzel was working for an investigative agency employed by Vitter's campaign, while Normand says a video he confiscated from Frenzel shows the agency tried to discredit Ellis and "keep the mainstream media neutered" on the prostitution story.

Vitter has responded to Edwards with his own ad, titled "Difficult Times."

With tinkling piano music in the background, Vitter sits in his kitchen and says with hang dog sincerity, "Fifteen years ago I failed my family.  But found forgiveness and love. I learned that our falls don't define us, but rather how we get up, accept responsibility and earn redemption."

Maybe, but with the Republican gubernatorial runoff fast approaching on November 21, it may now be Vitter's turn to be lynched.

Their wealth, entrepreneurial success, traditional family values and strong work ethic would seem to make Asian-Americans ideal Republicans, but in just two decades, their support for Democratic presidential candidates has more than doubled, toppling stereotypes and further worsening the GOP's outlook in national elections as the demographic tide runs out on white America.

Asian-Americans, who number some 17.2 million, are one of the fastest growing Democratic constituencies.  Although only 31 percent of them voted for Bill Clinton in 1992, 73 percent went for President Obama in 2012

"Today's Asian-Americans are not only liberal on the expected issues like health care reform, immigration reform, and educational reform, but they also seem to espouse liberal views across a wide range of unexpected issue areas like environmental politics, affirmative action, and the like," political scientist Taeku Lee tells The New York Times.  "We even find . . .  that nearly 2 out of every 3 Asian-Americans who report earning more than $250,000 a year supported an approach to reducing the federal budget deficit that would raise taxes on those earning more than $250,000-a-year."

In at least one respect, Asian-Americans are similar to Jews in their support for the Democratic Party.

Despite their affluence, Asian-Americans are on course to become a mainstay of what Democratic pollster Stan Greenberg calls the "rising American electorate," the liberal alliance of black and Hispanic minorities, single women and young voters.

FOR AL FRANKEN, IT'S NOT FUNNY

My expectations were not high when former Saturday Night Live comedian Al Franken ran for the U.S. Senate and narrowly defeated incumbent Norm Coleman in 2008.  Entertainers-turned-politicians have not typically covered themselves in glory.  Witness Jesse Ventura, Sonny Bono and Clint Eastwood.

But Franken, a liberal Democrat, has been a revelation as a senator who works hard worker and keeps his head down. Franken, who won re-election last year, is using his celebrity to help raise money for Democratic candidates in the party's effort to gain David Vitter's seat and the four others needed to take back the Senate.  Should Hillary Clinton win, the fate of her legislative agenda, as well as a potential Supreme Court nomination, will hinge on which party controls the Senate.

"The Republicans don't share our basic values about where economic growth comes from," Franken says. "I have nothing personally against my Republican colleagues other than their views on how the country works."

Politix Update is an irregular compendium written by veteran journalist Shaun Mullen, for whom the 2016 presidential campaign is his (gasp!) 12th since 1968.  Click HERE for an index of previous Politix Updates.

PHOTOGRAPH COURTESY OF CROOKS & LIARS
Posted by Shaun Mullen at 12:02 AM
Email ThisBlogThis!Share to TwitterShare to FacebookShare to Pinterest