Politix Update: Crisis Sure Has A Way Of Bringing Out The Worst In Republicans 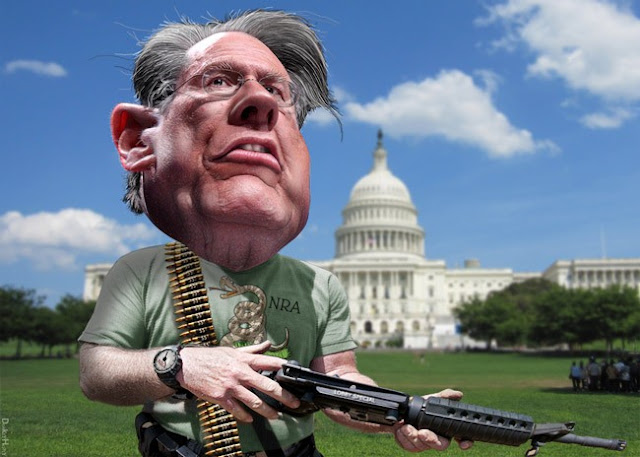 IN WAYNE LaPIERRE THE REPUBLICANS DO TRUST

This is the point in the movie where it was assumed that the Republican Party would come to its senses.  But, as it is turning out, the movie isn't Mr. Smith Goes to Washington or The American President or even Wag the Dog.  It's more like The Manchurian Candidate.

Times of crisis like the Paris attacks tend to bring out the best in people even in this dog-eat-dog age, but it is reliably bringing out the worst in Republicans, who find themselves caught another cyclonic event of their own making.  This time it's a consequence of their fealty to Wayne LaPierre, the enormously powerful president of the U.S.'s largest terrorist organization (hint: it's the National Rifle Association) and gun cuddlers.

The NRA and its Republican lap dogs have made it clear that they have no problem with Christians who shoot up schools and other public places with AK-47s in ours, the most violent nation in the so-called civilized world.  After all, it keeps happening and they have no interest in doing anything about it, right?  But refugees from the civil war in Syria, even orphaned children, are another matter and must not be allowed into the country because it's so easy for them to buy guns!  Thanks to the NRA and its Republican lap dogs.

This stance has birthed a slew of contradictory and irreconcilable positions.  After all, when stuff doesn't make sense to begin with, it's going to make even less sense when that cyclone hits.

Not the least of these positions is that fears over refugees doing dastardly terrorist things once they arrive in the U.S. would be a most excellent reason for closing a George W. Bush era legal loophole that allows suspected terrorists on the government's no-fly list to legally buy guns.  But noooo, the NRA and its Republican lap dogs oppose even that bit of sanity.

And doesn't America look like one big smacked ass on the world stage in preaching democratic values, even demanding democracy at point of gun as it did in Iraq, and then shitting all over democratic values at home?  Well no, if you’re a jingoistic Republican and you want to be president.

Beyond Little Ricky Santorum declaring that President Obama is in cahoots with ISIS and Dr. Ben Carson wanting to deport refugees already in the country, you have the sad spectacle of they and every other Republican candidate quaking in their combat boots over admitting refugees, even 5-year-olds, which has Chris Christie in an especially hypocritical panic since New Jersey has been among the most welcoming and ethnically diverse of states.  Unless you're Jeb Bush or Ted Cruz, and then you might consider letting in a Christian refugee or two.

Frontrunning Donald Trump, who becomes more vile by the day, warrants special mention.  After declaring that had Parisians been armed to their berets with AK-47s they would have repelled the jihadi bastards, he added another layer of slime by saying there should be mandatory registration of Muslims.  Just like Hitler required Jews to do in Germany.

Leave it to Mike Huckabee to make sense of the GOP's Guilty Until Proven Christian mantra.

"It's not about Muslims," Huckabee helpfully explained just hours before the House voted overwhelmingly on Thursday to drastically tighten screening procedures on Syrian refugees.  "If Methodists were strapping bombs to their children's chests and blowing them up so to kill a bunch of civilians, I'd be saying we need to be real careful about letting Methodists in, too."  How then to explain that virtually every domestic terrorist mass murderer in the U.S. -- from Olympic Park to the Wisconsin Sikh Temple  to that Charleston Church -- was an avowed Christian, if not necessarily a Methodist?

Then there are all those movie theater massacres, which brings us to right-wing icon Erik Erickson, who announced that he's skipping the new Star Wars movie in theaters because Obama can't keep us safe and terrorists with guns might show up.  Erickson has since backtracked and says he'll go because he'll be carrying a gun, and assumes everyone else will, too.

I know its ruffles Republican feathers to say so, but over 30,000 people are killed from gunfire in America each year. They are killed in their homes, at their jobs, in supermarkets and bowling alleys, even walking down the freaking street, not to mention churches and theaters.  And not one of them has been shot by a jihadi terrorist.

Even though the Republican field is still swollen (although we do already miss you, Bobby J.), there's bound to be a major shakeout in the coming months, and so the Democratic Party and presumptive nominee Hillary Clinton in particular can take solace that the eventual Republican nominee will be a nut, of which there obviously are a surfeit, or someone sane who has been so weakened by the long primary slog that they no longer seem to stand for anything because they've had to stand for so many things in kowtowing to a hard right-wing base while still trying to appear moderate.

But neither are necessarily a safe bet.  Here's why and why not:

* Eight different candidates have led the Republican field this campaign season.  While that volatility would seem to help Cinton, it could well have the opposite effect as a battle-tested nominee whose organization has been fine-tuned against all comers faces off against her.

* Turnout could benefit the Republican nominee because, you know, Democrats aren't all that fired up about Clinton.  The problem with this is that Republicans aren't particularly fired up either, and increasing numbers of party moderates are turning off and dropping out.

* Clinton's vulnerabilities include a coziness with Wall Street, a militant foreign policy and the perception that she's polarizing.  All would seem to be ripe for exploiting.  There's just one little hitch: The Republican candidates have the same vulnerabilities in spades.

With a year to go, the Republicans have failed to move the chains with their incessant rhetoric about coddling the rich and dumping on women, the poor, immigrants and refugees.

"A party wrestling with these issues is by definition not unified," writes longtime conservative doyen and reliable Republican apologist Peggy Noonan in the Wall Street Journal.  "The Democrats, for all their small struggles, are.  They are disciplined. Their central organizing principle is getting and holding power.  The Democrats have the advantage. They want one thing. The Republicans want many serious and opposing things."

This gives the Democrats an awfully big trump card, and we're not talking The Donald as such: They expect the Republicans to be stupid and they probably will be. In fact, the stupid scenario is playing out nicely -- unless you are a Republican establishmentarian -- in New Hampshire.

In the last two Republican presidential primary seasons, a conservative won in Iowa, while a moderate won in New Hampshire and outlasted the Iowa winner to nab the nomination.  But so far, Trump is way ahead in New Hampshire (and pulling away from the pack nationally) with moderate candidates like Marco Rubio and Jeb Bush stuck in the single digits.

"If a candidate acceptable to the party can't win New Hampshire or Iowa, the GOP will face a bleak choice," opines Nate Cohn of The New York Times. "Undertake the daunting and expensive task of mounting a come-from-behind effort, or grudgingly acquiesce to a candidate it really doesn’t want, like Ted Cruz, but who may be better than someone it can never accept, like Mr. Trump."

I have semi-secretly harbored the notion that John Kasich would rise to the top of the pack, get the Republican nomination and be a pretty darned good moderate alternative to Hillary Clinton.

Well, that dream has crashed and burned with the news the Ohio governator is proposing a new federal agency to spread Judeo-Christian values throughout the world as a way to combat the Islamic State.

"We need to beam messages around the world about what it means to have a Western ethic, to be a part of a Christian-Judeo society," Kasich said.  "It means freedom, it means opportunity, it means respect for women, it means so many things."

Including ramming so-called American values down the throats of unwitting and unwilling Arabs, and we know how well that has worked in the past.  Lindsey Graham actually had the best response to Kasich's brain fart: "I think that was the Crusades."

No post on that Grand Old Party would be complete without a tip of the Hatlo to Sarah Palin, without whose pernicious influence the party might actually still be competitive nationally.

The Killa from Wasilla is back in the news because daughter Bristol has taken time off from the abstinence lecture circuit to get pregnant out of wedlock for the second time.  This, Mommy Dearest explains, is because God (Kasich's God, perhaps?) "gives people second, third and fourth chances not to sin."

"Bristol is pregnant again," CBS correspondent Tracy Smith pointed out to Palin during a recent trip to Wasilla. "That can't be how you saw this playing out, unmarried and pregnant again."

"Heck, no!" the former half-term Alaska governator and veep candidate insisted in one of her famous word-salad replies. "Because being a single mom is -- oh, my goodness. My heart goes out to the single parents."