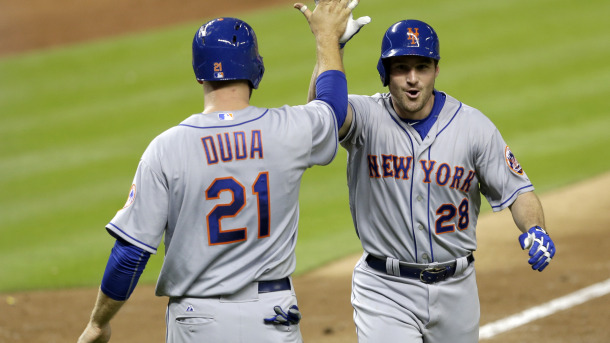 Murphy, an otherwise middling player, is in possession of what is arguably the hottest streak in the 139-year history of the big leagues, a genuine yowza in sports slang, and all eyes will be on the New York Mets second baseman when he steps up to the plate tonight in the World Series opener against the Kansas City Royals in Kansas City.

Over the last nine games, Murphy is hitting .421 with a 1.026 slugging percentage against top-flight pitching, including a record-breaking 1.294 in the League Championship Series. He's hit seven home runs, including one in each of the last six games, a post-season playoff feat that's never happened before.  In fact, Murphy has never hit more than 14 home runs in an entire season, nor ever hit a homer for more than two games in a row, and yet he's now one homer away from tying Barry Bonds, Carlos Beltran, and Nelson Cruz’s record of eight in a single postseason.

To compare Murphy with those greats is to strain credulity, and supposedly smart numbers nerds explain his streak by saying that it's so much statistical noise and really no different than flipping a coin and having it repeatedly land on heads.

That's horse hockey, as Colonel Potter was found of saying.  Every athlete, including a mediocrity like myself, knows when they're "in the zone."

Frank Messina is the Mets' official poet (I'm not making that up) and an old friend.

"Murphy's 'Ruthian' accomplishment thus far can only be attributed to one thing: the four leaf clover he found at his Aunt Rosie O'Malley's front lawn," Frank told me.  "That, and an incredible eye. He sees everything and has incredible intuition with regard to pitch sequence. In short, he's on fire!"

Murphy has made adjustments that help to explain his hot hand: He's stepped closer to the plate and started pulling the ball a little more, so he's striking, grounding and flying out less.  The rest of the explanation may be as simple as him being a pretty darned good hitter all along who has suddenly, if inexplicably, come into his own.  And it should be noted that no one was paying much attention to him when he had cold streaks.

The Mets are favored to win the World Series, but not just because of Murphy.  He's merely a surprise star on an already solid team.

PHOTOGRAPH COURTESY OF MAJOR LEAGUE BASEBALL
Posted by Shaun Mullen at 12:00 AM
Email ThisBlogThis!Share to TwitterShare to FacebookShare to Pinterest