Politix Update: A New Movie That The Brothers Bush Won't Be Rushing To See 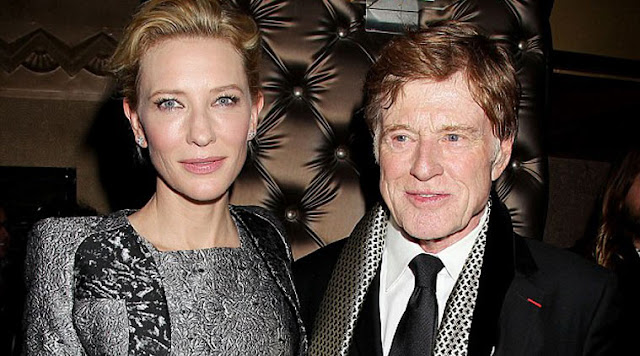 BLANCHETT AND REDFORD AS MAPES AND RATHER

While it's not All The President's Men, the new Robert Redford movie about how Dan Rather's distinguished career at CBS News imploded over a controversial report on our favorite chickenhawk president's problematic military service, does several things: Truth reminds us of the power of the right-wing media and malleability of the mainstream media, the cowardice of George W. Bush and, for people paying close attention, a certain hypocrisy that the foundering Jeb Bush shares with his presidential brother.

In All the President's Men, Washington Post Executive Editor Ben Bradlee (Jason Robards) tells reporters Bob Woodward (Redford) and Carl Bernstein (Dustin Hoffman) that as the enormity of the Watergate scandal became apparent, he realized that he'd never seen anything like it in a long career of going after the high and mighty. The story, Bradlee mutters, is no longer just about journalism, it's about no less than the future of the freaking country.

Truth -- both the movie and underlying story -- are not quite in that league, although there is a disheartening connection between the scandal that toppled a presidency because the WaPo stood behind its young guns in the face of enormous pressure from the White House to reassign them to something less incendiary, and CBS, which caved in after Rather and producer Mary Mapes (Kate Blanchette) were unable to prove the authenticity of six memos central to a report broadcast on 60 Minutes II in September 2004 even if the underlying premise was accurate -- a young George Bush skipped out on his Texas Air National Guard service and got away with that, as well as getting away with not having to serve in Vietnam, both because of his influential father.

There is no way that the 60 Minutes II report would have toppled the Bush presidency even if CBS hadn't wimped out and stood behind Rather and Mapes, nor would the story have derailed Bush's then-close race with John Kerry in the 2004 presidential campaign.  But Truth does remind us, in a round-about way, of public figures who question people's patriotism but in the contemporary application of the term chickenhawk avoided the Vietnam War themselves. While chickenhawks aren't confined to the GOP, it's hard to find a Democrat who is one while the number of prominent Republicans are legion: In addition to Bush, they include Dick Cheney, Newt Gingrich, Karl Rove, Tom DeLay, Rush Limbaugh and Ted Nugent.

Irony of ironies, it was Kerry who ended up with serious credibility problems about his service record when he was repeatedly slandered by Swift Boat Veterans for Truth, the group that led the attacks questioning his Vietnam service.  Never mind that Kerry, who commanded a swift boat (think Apocalypse Now) served meritoriously and received a Silver Star, Bronze Star and three Purple Hearts.

"As someone who truly understands the risk of standing up for something, I simply cannot express in words how much I value their willingness to stand up against John Kerry," a guy by the name of Jeb Bush wrote in a January 2005 letter regarding the group's anti-Kerry offensive. "Their efforts, like their service to their country, speak volumes about what matters most."

In 1972, Jeb had drawn number 26 in the Vietnam draft lottery, which likely meant his induction the following year and the prospect of a trip to the Big Muddy, something that his big brother was scrambling to avoid as he tried to transfer to a non-flying unit Texas Air National Guard Unit.

Anyhow, Jeb told his parents, George H.W. and Barbara, that he might file for draft-exempt conscientious objector status in order to avoid the draft and protect his privileged young ass.  (Remember that Vietnam was an American class war as much as it was a war against the Red Menace, and political nobility ran from their obligations, some all the way to Canada and Sweden.)  According to one Bush family biography, Babs and her husband, himself a World War II hero and ardent hawk, assured young Bush that they supported him.  Bush skated because the U.S. began its withdrawal from Vietnam the next year and the draft lottery was ended.

Truth is unabashedly sympathetic to Rather although less so to Mapes, who is depicted as being too hasty in getting the Bush story out.

Only months before the 60 Minutes II episode aired, the hair-on-fire producer had won major awards for a story about the scandalous treatment of prisoners by their American captors at Abu Ghraib prison in Iraq, a story doubly embarrassing to the Bush administration because it also blew the lid off of the administration's approval of the secret use of torture.  Its veracity was never questioned.

Truth, which is told from Mapes' perspective, implies that CBS News executives were pressured to quash the Bush story by corporate owners Viacom, which had business reasons to maintain friendly relations with the Bush White House, an allegation that was not proven because it was a sideshow to the main event -- the accuracy of the six Air National Guard memos.  Meanwhile, the blowback from the right-wing media was ferocious, and it didn't matter if it obsessed on the memos while ignoring the larger point that when it came to military service, Bush was a quitter.

CBS has refused to run advertising for Truth and says that it is a disservice to the public and journalists.

"It's astounding how little truth there is in Truth," said Gil Schwartz, chief spokesman for CBS Corp. and a character in the movie. "There are, in fact, too many distortions, evasions and baseless conspiracy theories to enumerate them all. The film tries to turn gross errors of journalism and judgment into acts of heroism and martyrdom."

Brad Fischer, one of the film's producers, expressed surprise about CBS' denunciation.

Truth has opened to mediocre box offices.  (It's tough to compete with  low brainpower juggernauts like Goosebumps.) National theatrical release will follow.

The movie doesn't try to resolve the veracity of the memos, and film critic Stephen Holden of The New York Times offers a caution while praising the performances of Redford, Blanchette and others: "The title of Truth, a gripping, beautifully executed journalistic thriller . . . should probably be appended with a question mark. More than most docudramas about fairly recent events, it is so well written and acted that it conveys a convincing illusion of veracity."