Politix Update: Why Bernie Sanders, Like Gene McCarthy In 1968, Will Fail 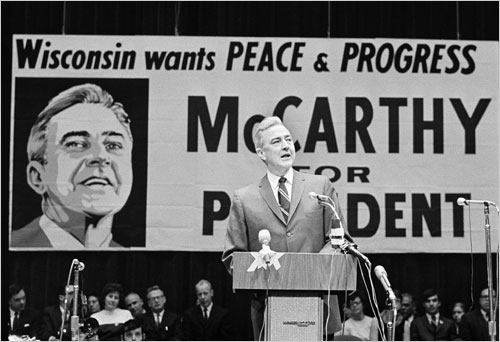 NOR LAW, NOR DUTY BADE ME FIGHT / NOR PUBLIC MEN, NOR CHEERING CROWDS / A LONELY IMPULSE OF DELIGHT / DROVE TO THIS TUMULT IN THE CLOUDS. ~ W.B. YEATS

If you weren't coming home in a pine box or wheelchair from Vietnam, the year 1968 was tremendously exciting, and among the waves of change roiling American society none was quite as dramatic as Eugene McCarthy's campaign to wrest the heart and soul of the Democratic Party from the hawks and take the White House in what would be a bloodless and historic coup d'état.

I was a junior in college, editor of the campus newspaper and, while avowedly objective in all things political as a young journalist, I secretly and fervently supported McCarthy.  My roommates took leave of classes, if not their senses, to slog through deep snow in New Hampshire to volunteer for the maverick U.S. senator from Minnesota in the first-in-the-nation primary.  They even cut their long hair and shaved off their beards to "get clean for Gene."

McCarthy stunned President Johnson and won 20 of New Hampshire's 24 convention delegates, while Richard Nixon won the Republican primary.  Robert Kennedy quickly reversed field and joined the race, hastening LBJ's dramatic announcement that he would not seek reelection.  And suddenly anything seemed possible to my friends and I, as well as millions of young people and others opposed to a war that already had taken more than 20,000 American lives and deeply disillusioned with the Democratic establishment, a ruthless president and his lapdog Congress.

The sensational early successes of McCarthy invite comparisons with Bernie Sanders, who like McCarthy nearly five decades earlier, has tapped into a reservoir of disenchantment with the Democratic establishment in the person of Hillary Clinton.

There are indeed similarities, but they will not hearten the supporters of Sanders, a Democrat-turned-Independent and self-described socialist from Vermont: While McCarthy and Sanders were and are men of principle and there is a not dissimilar reservoir of disenchantment, it also does not run deep.  And like McCarthy, Sanders will get very little rank-and-file support, while his quixotic quest will end as McCarthy's did, a mere footnote in the annals of presidential campaign history.

The lack of rank-and-file support is the key.

Sanders' liberal support, like McCarthy's, is a given.  No surprises there as liberals embody what opposition there is to Clinton, although she is considered "liberal" by contemporary standards.  But despite some seemingly promising poll numbers for Sanders, Clinton holds a huge and insurmountable lead among moderate and conservative Democrats, both white and nonwhite.

Sanders' lack of black and Latino support is especially striking.  Unlike most of the riders in the Republican clown car, that has nothing to do with how he views minorities and everything to do with how working-class, less liberal Democrats view him.  Which is to say, traditionally Democratic voters.

So while Sanders may pick up a few delegates in the early primaries, he has no chance of succeeding if he can't attract voters outside of his fairly small constituency.  And he won't.

Overall, a more apt comparison than Eugene McCarthy taking on LBJ in 1968 or Bernie Sanders taking on Hillary Clinton in 2015 may be Barack Obama challenging Clinton in 2008.  More specifically, and this is what especially interests this old war horse with 11 presidential campaigns under his belt, which candidates are capable of bringing new thinking to old problems, as well as dealing with new ones?

By this measure, McCarthy may well have been a problematic president given his prickly personality and a portfolio that did not extend very far beyond foreign policy.  And while Sanders bubbles with idealism, his portfolio is filled with left-leaning policy ideas as out of step with the political mainstream as are those of Ted Cruz or Scott Walker on the right.

The Obama-Clinton match-up resonates for me because of the Iraq War.  Clinton was a conscript in that war, and although she was to disavow her initial support for it, I among others wondered whether she would be a George Bush in skirts as president.  Obama (as well as Sanders) opposed the war from its outset, and he followed through on a campaign pledge to end U.S. involvement in it even if the rise of ISIS has somewhat tempered the American withdrawal.

And there is this as well: Even though party establishmentarian Hubert Humphrey was to vanquish McCarthy (Bobby Kennedy had been assassinated in June), and Humphrey was defeated by Nixon, my generation did eventually had an opportunity to set things to rights, and we blew it.  With Obama, there was an opportunity to give the next generation a shot at shaking up the Old School establishment.

Has he?  My answer is a qualified "no," but we'll have to wait and see.

IT DIDN'T WORK BEFORE, SO LET'S DO IT AGAIN

Although Republicans control both houses of Congress, there isn't a whole lot they can do in their unceasing efforts to dismantle President Obama's policies other than what they've done before -- tie things in such knots that there could be a government shutdown at the end of September.

Previous shutdowns over the past 20 years included the Newt Gingrich engineered dual shutdowns of 1995 and 1996 over budgetary standoffs with President Clinton and the John Boehner-engineered 2013 shutdown over Obamacare funding.  And there have been a few Republican-led near misses.

These shutdowns and almost-shutdowns, which of course were all about asserting power and not fiscal prudence, have had two consequences: The impasses eventually were resolved when the Republicans blinked and the Republicans reaped all the bad publicity.  Which is why it would seem to make no sense that they again are on a collision course with shutting down government and reaping the animosity that again would engender, this time with additionally negative consequences for a party that is the midst of another stumbling effort to retake the White House.  (It's not a coincidence that not one of the 17 Republican presidential wannabes are House members.)

Alas, as in so many other aspects of the contemporary Republican playbook, alienating a lot of voters in the service of dangling red meat in front of a few seems to be the only way for this determinedly dysfunctional bunch to go.

We live in the era of the litmus test, at least as Republican politicians are concerned, and there is a whopper of a one looming for New Jersey Governor Chris Christie.

A voter registration bill passed by the state Legislature last month would make New Jersey, along with Oregon, a national leader through automatic voter enrollment at the state motor vehicle department.  Apply for or renew your driver’s license and Presto! you're registered to vote.

But the bombastic Christie, who once supported a Motor Voter law as governor of arguably the most liberal state, as well as encouraging early voting and expanding multi-language election materials, is now agin' them all because he wants the Republican presidential nomination, although sloppy seconds would be just fine, thank you.

"There’s much more politics behind this than there is democracy," he said of the so-called Democracy Act, and strongly hinted he'll veto it because of that Republican bogeyman — voter fraud, a virtually nonexistent problem but handy excuse to hinder the voting rights of minorities, which is to say Democrats.

THE DONALD & THE DAMAGE DONE

Donald Trump's serial provocations have Republican leaders back on their heels and at a loss about how to curb the party's white nativist poster boy since exiling him from the GOP temple on principle would never occur to these Uriah Heepish cowards, and even barring him from forthcoming debates would backfire.

Trump's meteoric rise in the polls has been unchecked.  He is polling second nationally among all Republican clown car riders (and ahead of Jeb "Dark Money" Bush) in some polls, while he is first in some outlying national polls and a new North Carolina poll.  While the Tarheel State may deserve him, a lot of people clearly support him.

"The fire at this point cannot be tamed. It is not controllable," one veteran Republican operative told Politico. "Donald Trump is the only one to control his fire."

"Trump is just dominating the race right now, he's sucking the air out of this thing," moaned one Republican. "Our candidates are all being forced to react to his comments."

While Trump's racist blatherings appeal to what the New York Times euphemistically calls the "anxious white voters" Republicans dare not alienate, something . . . anything had to be done, so National Committee chairman Reince Priebus shook off his paralysis, hiked up his drawers and called the celebrity candidate to ask him to speak in . . . uh, more measured tones.

QUOTE FROM YEATS' "AN IRISH AIRMAN FORSEES HIS DEATH," WHICH WAS A GENE McCARTHY FAVORITE.
PHOTOGRAPH COURTESY OF AMERICA.GOV
Posted by Shaun Mullen at 12:02 AM
Email ThisBlogThis!Share to TwitterShare to FacebookShare to Pinterest