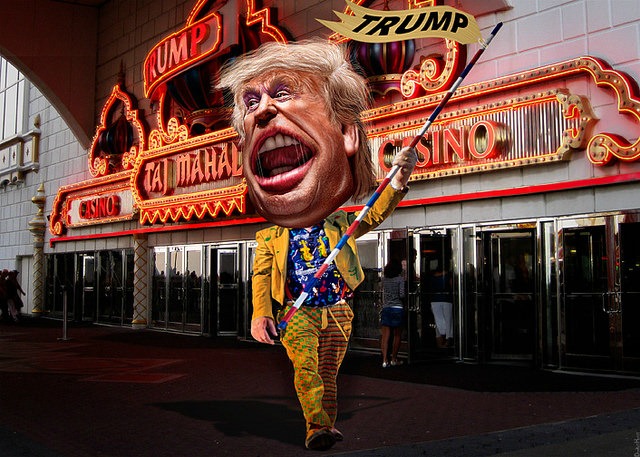 DONALD TRUMP IS THE PERFECT REPUBLICAN.  NO WONDER HE EMBARRASSES THEM. ~ JIM WRIGHT

We won't know until early next week whether Donald Trump's slander of John McCain will slow if not derail his seemingly improbable rise to the top of the Republican presidential polls, but early indications are that the bloviating gadzillionaire's criticism of the war hero for having the temerity to get shot down over North Vietnam and beaten to within an inch of his life at the Hanoi Hilton for five and a half years will barely cause a blip.

This will be further bad news for a Republican Party already well back on its heels in its quest to retake the White House.  The GOP is reaping the whirlwind of years of divisive politics and fear mongering in the service of short-term gains and still smarting from a series of legislative, judicial and diplomatic successes by Barack Obama despite its ferocious opposition to him, while much of the news media is fixated on an unserious man who has no desire to become president, let alone the chops to be nominated or elected, but has now so flummoxed the Republican field that it's terrified of criticizing the people who support Trump. That would be the party's xenophobic and racist white male base.

Polls released earlier this week show that the overheated Trump is pulling away from the overcrowded Republican field.

The Washington Post-ABC News Poll, based on interviews with voters last Thursday through Sunday, showed Trump with almost twice the support of his closest rivals -- Scott Walker and Jeb Bush -- and six times as much support as he had two months ago.  There were some signs in polling interviews on Sunday, the day after Trump went off on McCain, that there was some drop off of support, but the extent of that erosion -- if any -- won't be clear until the next round of national polling is released next week. (It also is being noted that wingnuts by the name of Bachmann, Cain and Santorum were running away from the competition at this point four years ago, but who the heck cares?)

The news media frenzy over Trump is not getting in the way of other candidates' messages, it's trampling them.

The New York Times has had 10 stories on Trump this week, including four today under the heading "Trump Today," the kind of coverage the Iraq nukes deal and British Open have gotten.  As well as three op-ed columns.  The biggest news piece focuses on the feud between Trump and media mogul Rupert Murdoch and is chockablock with gossipy tidbits, including the awkward aftermath of Murdoch's high-profile divorce from Wendi Deng Murdoch and the revelation that Trump's daughter, Ivanka, unlike many New York society figures, has remained loyal to Murdoch's ex, who is a close friend.  Murdoch makes clear his feelings for The Donald, calling him a "phony," an "embarrassment," and a "catastrophe."  (Murdoch, of course, has done quite well off of Trump, and the record for front-page stories on a single topic in his New York Post is its coverage of Trump's affair with Marla Maples and split with Ivana Trump.)  Then there's this.

The reasons that the least qualified wannabe in the Republican field (apologies to Dr. Ben Carson) is creaming the competition are by now perfectly clear if still largely unacknowledged by the so-called GOP leadership: Trump's red-meat rhetoric resonates deeply with a big chunk of the party's base; the messages of WalkerBushRubioPaul do not.

The McCain flap laid bare an uncomfortable truth: That xenophobic and racist white male base is a lot more concerned about illegal immigrants, income disparity, the power of the elites, and the demographic tide running out on them than disparaging veterans in general and dissing an old war hero in particular, even one who modestly says he was no hero but served in the company of them.  ("I was able to intercept a surface-to-air missile with my own airplane, which was no mean feat to say the least," McCain has said.)

The Arizona senator is, in fact, the leading Republican voice for the immigration reforms so vehemently opposed by the base, and while the base hates the news media, it worships McCain basher Rush Limbaugh as their Great White God.  (For the record, that Rupert Murdoch, himself an immigrant, also supports reform.)

And if you look at the enormous mess that is the Republican Party, McCain must bear responsibility for one of the deepest self-inflicted wounds.  As the redoubtable Booman put it over at the Booman Tribune, "I  still believe that John McCain ripped a tear in the fabric of the universe and let some alien form of Stupid arrive here on our planet when he gave us Sarah Palin."

Then there is a corollary uncomfortable truth that resonates especially deeply for me as a veteran: Trump's declarations that Mexicans are rapists and drug dealers is okay, but impugning a white guy's war record is out of bounds if the vet is a Republican and not John Kerry, Tammy Duckworth or Max Cleland. Kerry's 2004 presidential run may have been dismal, but the Republicans bequeathed us a new term -- swiftboating -- a neologism meaning an untrue political attack, in this instance claims that Kerry had fabricated his heroic Vietnam War record.  The legless Duckworth and Cleland, a triple amputee, caught flak over whether they were sufficiently loyal Americans despite their service in Iraq and Vietnam, respectively.

PAYBACKS ARE A BITCH

Jeb Bush, whose message (whatever it is) is among those getting trampled by Trump, was quick to defend McCain, but any sense of outrage was AWOL 10 years ago when Bush praised Swift Boat Veterans for Truth, the group that led the slanderous (there's that word again) attacks questioning the Vietnam service record of Kerry, who commanded a swift boat (think Apocalypse Now, kiddies) and received a Silver Star, Bronze Star and three Purple Hearts.

"As someone who truly understands the risk of standing up for something, I simply cannot express in words how much I value their willingness to stand up against John Kerry," Bush wrote in a January 2005 letter regarding the group's anti-Kerry offensive. "Their efforts, like their service to their country, speak volumes about what matters most."

Okay, I often write with a barely concealed sense of outrage, but this kind of hypocrisy is truly outrageous. But wait! There's more:

In 1972, Jeb! drew number 26 in the Vietnam draft lottery, which likely meant his induction the following year and the prospect of a trip to the Big Muddy.  He then told his parents, George H.W. and Barbara, that he might file for draft-exempt conscientious objector status in order to avoid the draft as well as protect his privileged status. (Let's not forget that Vietnam was an internal class war as much as it was a war against the Red Menace.)

According to one Bush family biography, Babs and her husband, himself a World War II hero and ardent Vietnam War hawk, assured young Bush that they supported him.  As it turned out, the U.S. began its withdrawal from Vietnam the next year and the draft lottery was ended, so Bush skated.

Contrast all of that with some of this:

In June 2008, retired Army General Wesley Clark appeared on Face the Nation as an unofficial Barack Obama surrogate. Clark said that while he considered McCain a personal hero, he didn't believe that "getting shot down is a qualification to be president."

The comment was no sooner out of Clark's mouth than candidate Obama disavowed it, saying no one should ever devalue military service, "especially for the sake of a political campaign." Clark, who was on some lists as a potential Obama running mate, was not even invited to the Democratic convention.

IT'S THE ECONOMY, STUPID

More bad news for the Republican Party: The economy is expected to be chug chugging right along for the 2016 presidential election, and a good economy further hurts its crappy chances.

In a New York Times survey of 17 economists, the consensus view was that unemployment would be the lowest it has been during an election since 2000, when it stood at 3.9 percent. The median forecast for the unemployment rate when voters go to the polls in November 2016 is 4.8 percent, down from 5.3 percent last month. The economists saw only a 15 percent chance of a recession starting by next Election Day, while interest rates, inflation and gasoline prices will be slightly higher than they are now, but quite low by historical standards.