For Robert Hunter, 'Song Is A Naked, Living And Amorphous Creature' 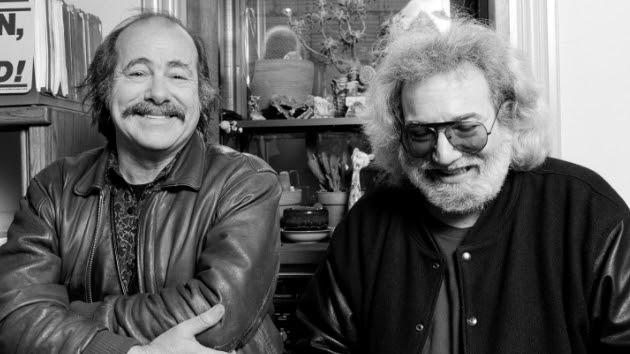 While even the most casual listener knows Garcia's name if nothing else beyond him being the face of the Grateful Dead, that love 'em or hate 'em psychedelic-tinged juggernaut, Hunter remains a virtual unknown. Despite his prodigious songwriting skills and vast catalog of lyrics, including some 75 songs  written to be sung over Garcia's powerful melodies, his name is not likely to come up even among people familiar with the Great American Songbook, the canon of the most influential and important popular songs of the 20th century.

The Great American Songbook is, for my money, the paragon of American musical culture, but how Garcia and Hunter fit into it is not immediately apparent even if they are being inducted into the Songwriters Hall of Fame later this year.  (Other new inductees include Toby Keith, Cyndi Lauper, Linda Perry, Bobby Braddock and Willie Dixon.)

Garcia and Hunter are naturals for the Songwriters Hall of Fame not because they collaborated on a lot of stuff, but because that stuff is uniformly good and some of it is undeniably great.  Their songs mine rich veins of Americana -- Appalachian folklore, New Orleans mythos, Memphis blues and Wild West balladry, as well as some biblical narrative, dollops of generational angst and celebrations of the Sixties counterculture from which the Dead evolved, but only very rarely anything overtly political.

Their songs have been covered by artists ranging from Suzanne Vega to Los Lobos to Burning Spear to Jesse McReynolds to Bob Dylan, in whose hands they  sometimes shine even brighter and seem even more appropriate to the times years after they were written.

Although Hunter occasionally drops clues, he avoids labeling his lyrics and never -- as in never -- explains in any depth what a song is about because, don't you know, he believes that the lyrics themselves say all that needs saying.

"I also believe, through experience, that beneath the window dressing of metaphor and rhyme, song is a naked, living and amorphous creature" he has said.  "Where some assume that song is the transcription of self, my more intimate belief is that one goes out in the woods and ketches one, dresses it up and trains it to talk.

"How the brute is trained is a matter of personal style, but beneath the window dressing the song remains elusively itself, prevented from full expression by the limits of its intended use.  The writer's prejudices, blindsides, and occasional strengths are all utilized in the disguising of the primordial beast into form adequate to its specific purpose."

There also is the small matter of some Garcia-Hunter songs never being played the same way twice, "Dark Star" being a prime example.

"Dark Star" is a psychedelic infused modal vamp that could run 20 minutes or longer, always toward the end of the second set and usually woven into extended jams.  It includes some of the first lyrics Hunter wrote for the Dead.

DARK STAR CRASHES POURING ITS LIGHT INTO ASHES / REASON TATTERS THE FORCES TEAR LOOSE FROM THE AXIS . . . SHALL WE GO, YOU AND I WHILE WE CAN / THROUGH THE TRANSITIVE NIGHTFALL OF DIAMONDS ~ DARK STAR

Garcia and Hunter met in the early Sixties.

"We both came from the same place musically," he once told an interviewer.  "We started out as a folk duet and went on to become a bluegrass trio and all kinds of different bands, and I know what songs Jerry liked the best, and I know why he liked them the best.  Lines like, I forget the name of the song, but it’s got this line, 'Ten thousand were drowned that never were born.'  Wow.  It’s got the mystery and a rhythm and a beautiful image.  Jerry was a sucker for that sort of thing, not that there was much of that sort of thing around.

"I knew what he liked, and it was the same thing I liked, and I think a lot of our songs had that quality in it, like almost an ancient folk touch of some sort.  It’s hard to put it into words, but it’s what makes most of our songs unique."

Hugh Cutler, a journalist who first heard the Dead in their infancy, found them too rough around the edges and anything but professional.

But the more Hunter wrote, Cutler explains in a Kiko's House guest post, "the subtler and more intertwined his images and narratives became, until soon he’d created a unique hybrid of poetic borrowings. And Garcia provided the sweetest sonic envelopes in which to seal them."

Hunter's lyrics seldom referenced current events.  "New Speedway Boogie" is a notable and haunting exception, penned after a star-crossed December 1969 rock concert arranged, in part, by the Dead and headlined by the Rolling Stones during which four people died, one at the hands of a Hell's Angel, a grim event immortalized in the documentary film Gimme Shelter.

NOW I DON'T KNOW BUT I BEEN TOLD / IN THE HEAT OF THE SUN A MAN DIED OF COLD / DO WE KEEP ON COMING OR STAND AND WAIT? / WHEN THE SUN SO DARK AND THE HOUR SO LATE? ~ NEW SPEEDWAY BOOGIE

Garcia left this mortal coil in 1995, some eight days after his 53rd birthday.

"Unlike many stars, Garcia did not seek out fame," is how I once summed up his life.  "At heart an unassuming man who just wanted to play music, fame found him. And despite a long career as an extraordinary composer and guitarist that brought him adulation, gold records and eventually wealth, happiness remained elusive. He was never able to get the addictive drug monkey off his back for very long once it climbed on. Technically, heroin finally killed him, or rather his heart, but I believe that fame was the real culprit."

"Hunter is an old buddy,” Dylan has said.  "We could probably write a hundred songs together if we thought it was important or the right reasons were there.  He's got a way with words and I do too.  We both write a different type of song than what passes today for songwriting."

Which brings us to "Box of Rain," which along with "Eyes of the World" is one of my two favorite songs with lyrics by Hunter.  And words to live by.

PHOTOGRAPH BY JAY BLAKESBERG
Posted by Shaun Mullen at 12:01 AM
Email ThisBlogThis!Share to TwitterShare to FacebookShare to Pinterest

FIFA 15 Coins said...
This comment has been removed by a blog administrator.
9:32 PM

Very nice. Hunter deserves much more credit for his lyrics than he has received.

lyrics are such a mystery. never quite read right when not being sung. how do you separate them from the song? art and collaboration, mystical partnerings

boosting lol said...
This comment has been removed by a blog administrator.
1:06 AM