'Just Because They're Dead Don't Mean They're Republicans' 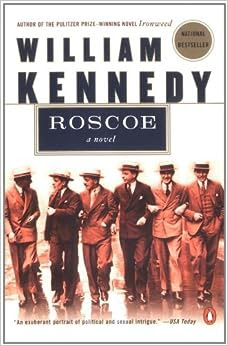 In the opening pages of William Kennedy's Roscoe: A Novel, Felix Conway, the éminence grise of the fabled Albany, New York, Democratic machine, advises Roscoe Conway on how the game is played.  It is 1945:


"How do you get the money, boy? If you run 'em for office and they win, you charge 'em a year's wages.  Keep taxes low, but if you have to raise 'em, call it something else.  The city can't do without vice, so pinch the pimps and milk the madams.  Anybody that sells the flesh, tax 'em.  If anybody wants city business,, thirty percent back to us.  Maintain the streets and sewers, but don't overdo it.  Well-lit streets discourage sin, but don't overdo it.  If they play craps, poker, or blackjack, cut the game.  If they play faro or roulette, cut it double.  Opium is the opiate of the depraved, but if they want it, see that they get it, and tax those lowlife bastards.  If they keep their dance halls open twenty-four hours, tax 'em twice.  If they run a gyp joint, tax 'em triple.  If they send prisoners to our jail, charge 'em rent, at hotel prices.  Keep the cops happy and let 'em have a piece of the pie.  A small piece.  Never buy anything that you can rent forever.  If you pave a street, a three-cent brick should be worth thirty cents to the city.  Pave every street with a church on it.  Cultivate priests and acquire the bishop.  Encourage parents to send their kids to Catholic schools, it lowers the public-school budget.  When in doubt, appoint another judge, and pay him enough so's he don't have to shake down the lawyers.  Cultivate lawyers.  They know how its done and will do it.  Control the district attorney and never let him go; for he controls the grand juries.  Make friend with millionaires and give 'em what they need.  Any traction company is a good traction company, and the same goes for electricity.  If you build a viaduct, make the contractor your partner.  Whenever you confront a monopoly, acquire it.  Open an insurance company and make sure anybody doing city business buys a nice policy.  If you don't know diddle about insurance, open a brewery and make 'em buy your beer.  Give your friends jobs, but at a price, and make new friends every day.  Let the sheriff buy anything he wants for the jail.  Never stop a ward leader from stealing; it's what keeps him honest.  Keep your plumbers and electricians working, and remember it takes three men to change a wire.  Republicans are all right as long as they're on our payroll.  A city job should raise a man's dignity but not his wages.  Anybody on our payroll pays us dues, three percent of the yearly salary, which is nice.  But if they're on that new civil service and won't pay and you can't fire 'em, transfer 'em to the dump.  If you find people who like to vote, let 'em.  Don't be afraid to spend money for votes on Election Day.  It's a godsend to the poor, and good for business; but make it old bills, ones and twos, or they get suspicious.  And only give 'em out in the river wards, never uptown.  If an uptown voter won't register Democrat, raise his taxes.  If he fights the raise, make him hire one of our lawyers to reduce it in court.  Once it's lowered, raise it again next year.  Knock on every door and find out if they're sick or pregnant or simpleminded, and vote 'em.  If they're breathing, take 'em to the polls.  If they won't go, threaten 'em.  Find out who's dead and who's dying, which is as good as dead, and vote 'em.  There's a hell of a lot of dead and they never complain.  The opposition might cry fraud but let 'em prove it after the election.  People say voting the dead is immoral, but what the hell, if they're alive they'd all be Democrats.  Just because they're dead don't mean they're Republicans."

Do you think things have really changed all that much?


From Roscoe: A Novel © 2002 by William Kennedy
Posted by Shaun Mullen at 3:03 PM
Email ThisBlogThis!Share to TwitterShare to FacebookShare to Pinterest