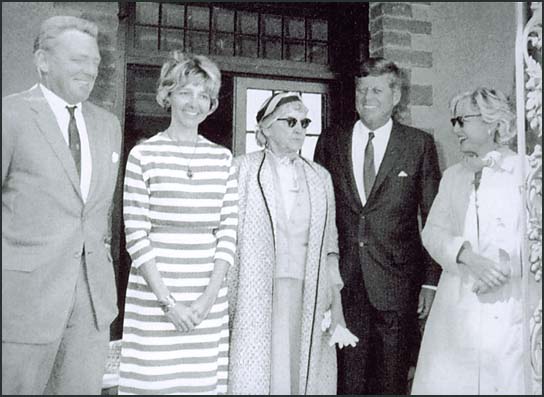 When the body of Mary Pinchot Meyer was found in October 1964 on a wooded towpath in Washington's Rock Creek Park, the apparent victim of a random murder, she was mourned by friends as a beautiful Georgetown socialite who in the years since her divorce from a high-ranking CIA official had blossomed into an abstract painter with an independent streak that included affairs with President Kennedy and other powerful men.

It was obvious that the exceedingly discreet Meyer knew things that she wasn't supposed to know. Her sister and friends quickly found and secreted her diary and a high-ranking CIA official destroyed her other papers, leading to speculation that her death was somehow related to Kennedy's assassination. Rumors also have persisted that she turned on the young president to marijuana, as well as LSD that she had gotten from Timothy Leary.

FROM DUTIFUL WIFE TO JFK'S MISTRESS

Daughter of journalist Ruth Pickering and Amos Pinchot, a wealthy lawyer and key Progressive Party figure, Mary was raised at Grey Towers, a delightfully quirky estate in northeastern Pennsylvania that I have visited. She grew up in the midst of left-wing intellectuals, swam nude under the estate's waterfalls, rode horseback, played a mean game of tennis and dinned with her family in the Finger Bowl, a water table where food was sent out by servants on balsa wood rafts that were floated from diner to diner with gentle pushes.

Mary attended exclusive Brearley School in Manhattan and Vassar College, where she became interested in Communism, but left Vassar to become a journalist and wrote for United Press and Mademoiselle. Not just another pretty face, she was a bohemian of a sort and a woman who sought to dictate the terms of her own life in a man's world. She became a pacifist and as a member of the American Labor Party came under the scrutiny of the FBI.

Cord Meyer, a Yale graduate and Marine Corps lieutenant who had lost his left eye from a shrapnel injury suffered in combat on Guam, came into Meyer's life in 1942 and then again two years later. Attracted by his lean good looks, pacifism and support for a world government that was much the vogue in intellectual circles in the post-war years, they were married by theologian Reinhold Niebuhr in 1945.

Mary settled into a housewife's life and she and Cord eventually had three sons, one of whom was to die when he was struck by a car. Her husband became president of the United World Federalists, but in the early 1950s began to re-evaluate his views as the American Communist Party infiltrated the organization.

In 1951, Allen Dulles, the first civilian director of the CIA, approached Cord and in what on its face appeared to be an extraordinary career change, he agreed to become the principal covert operative of Operation Mockingbird, which infiltrated and influenced domestic and foreign media. It was, in fact, a logical move.

Cord had never been a revolutionary as much as a pragmatist, while the communist-fighting CIA was an extension of the secret Yale societies of which he was a part. No fewer than 42 members of Cord's Class of 1942 had joined the CIA's predecessor organization, the Office of Strategic Services. Mary may also have done some work for the CIA during this period. She was a "cleared wife," considered to not be a risk to blab any secrets her husband might mutter in his sleep, but her fondness for spur-of-the-moment love affairs reportedly made the agency wary of her.

Cord's appointment marked a huge shift in the Meyer's lives. They moved from Cambridge, Massachusetts to the Virginia suburbs of Washington, D.C. and then to the Georgetown neighborhood just as it was becoming the political and social center of the city.

The Meyers became highly visible members of capital society. Their friends included powerful journalists and even more powerful CIA officials, including legendary counter-intelligence officer James Angleton, who would destroy Mary's papers after her murder, and Mary and Frank Wisner, who was Cord's boss. Then there was neophyte Massachusetts Senator John F. Kennedy and his wife, Jacqueline, with whom Mary would become close.

Mary, encouraged by Cord, devoted what spare time she had to her painting and remained aloof of the social scene until she became a regular visitor at the Kennedy White House.

When Mary filed for divorce from Cord in 1958, many friend were shocked, but the marriage had been on the rocks for years. Both had had numerous affairs, including Mary's liaisons with an Italian gigolo who sailed around the Mediterranean on a yacht with his dog. He promised to marry but eventually jilted her.

Mary remained a dutiful mother to her two surviving sons, and in her spare time resume painting in a converted garage studio behind the Georgetown home of her sister Tony and her husband, rising Washington Post star Ben Bradlee. 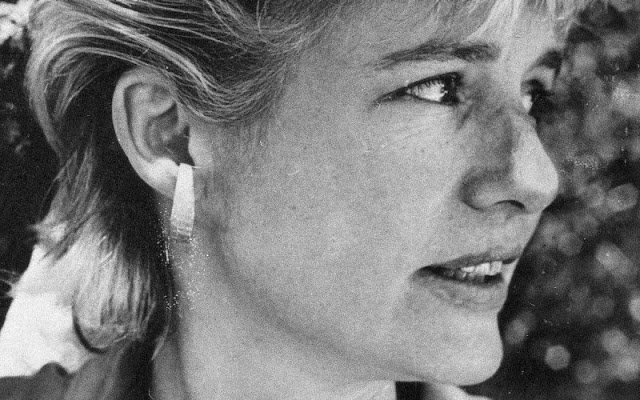 MARY'S DIARIES HAD TO BE DESTROYED

Mary and Kennedy reportedly had about 30 trysts, most of them in 1962 and many at the White House when Jackie was out of town. No matter, the First Lady was aware of these goings-on and remain a good friend of Mary's.

In January 1963, Post publisher Philip Graham  revealed the ongoing affair to a meeting of newspaper editors, but his claim was never reported in the media. Although the president's philanderings were well known among the press corps and Georgetown elite, this was an era decades before the term "semen-stained dress" had entered the national vocabulary.

Ever the experimenter, Mary was turned on to LSD by Timothy Leary in 1962 and reportedly smoked marijuana and tripped with Kennedy during many of their trysts. Leary later claimed that Mary had influenced the president's "views on nuclear disarmament and rapprochement with Cuba."

On October 12, 1964, eleven months after Kennedy's assassination and two weeks after the Warren Commission report was made public, Mary finished a painting and went for a walk along the Chesapeake and Ohio Canal towpath in Georgetown. A mechanic trying to fix a car on Canal Road heard a woman cry out, "Someone help me, someone help me." He heard two gunshots and ran to a low wall looking over the path where he saw "a black man in a light jacket, dark slacks, and a dark cap standing over the body of a white woman."

Mary's body had two bullet wounds, one at the back of the head and another in her heart. An FBI forensic expert later said "dark haloes on the skin around both entry wounds suggested they had been fired at close-range, possibly point blank.

Minutes later a disheveled, soaking wet African-American man named Raymond Crump was arrested near the murder scene. No gun was found and Crump was acquitted after a trial at which Mary's background was kept from his lawyer, Dovey Johnson Roundtree,  and the jury.

"It was as if she existed only on the towpath on the day she was murdered," Roundtree later said.

Mary had told close friend Ann Truitt to retrieve her diary -- actually a sketchbook with paint swatches and some writing -- if anything ever happened to her. Truitt was living in Tokyo when the murder occurred and called Angleton and Bradlee to ask if they had found the diary.

What happened next remains a matter of dispute.

"We didn't start looking until the next morning," Bradlee recalled. "Mary's house . . . was locked, as we had expected, but when we got inside, we found James Angleton, and to our complete surprise he told us he, too, was looking for Mary's diary."

Tony and Ben Bradlee later found Angleton trying to pick a padlock at Mary's studio. After he left, Tony found the diary and many letters in a metal box. These were given to Angleton, who later claimed he burned the diary, in which he said Mary wrote that she and Kennedy had taken LSD before "they made love," but then returned it to Tony many years later, who then burned it herself in Ann Truitt's presence.

Several of the key players believe that Mary would not have wanted Angleton to have been involved, while his role in the events after her death and his pursuit of papers that mentioned Kennedy or his assassination has made her private life seem like a matter of national security.

Some insiders have stated that while Mary's diary detailed her intimate relationship with the president, it gave no suggestion that she knew anything about the assassination.

Cord Meyer publicly stated that he was convinced that Crump had murdered Mary, a response to be expected from an Agency man. But years later, literary biographer C. David Heymann claimed that when he asked Cord who had murdered Mary six weeks before his death in 2001, he reportedly hissed back, "The same sons of bitches that killed John F. Kennedy."


Portions of this post originally were published in June 2010.  It is based, in part, on Nina Burleigh's A Very Private Woman: The Life and Unsolved Murder of Presidential Mistress Mary Meyer (1999). The movie An American Affair (2009) was based on the book.

Anonymous said...
This comment has been removed by a blog administrator.
9:36 PM

Never underestimate the absolute gullibility of conspiracy theorists. Whenever someone dies who had an affair with JFK the moonbats come out of the woodwork to claim they died at the hands of the CIA. When Angie Dickenson dies, these same folks will say she was murdered because she knew too much.

Angie called JFK's sexual prowess, “the best 20 seconds of my life.”Now there's a secret neither JFK or the CIA would want publicized.

It doesn't seem to matter anymore. Bill o'Reilly helps make sure of that. All money. All the time. Yeah, that channel. "How does it feel?........." thx, Zimmy

Read Mary Mosaic by Janney. Cicero. - are you the govt 's disinfo specialist on duty today? Which agency do you work for?

E. Howard Hunt put Cord Meyer at the top of the list of those involved in killing JFK

the ghost of JFK said...

How does the Warren Commissions findings still fly?? It's total BS

This is QUITE TRUE as I own The DVD of 'An American Affair'!

Who are all those men at the crime scene? Why are there so many when supposedly they didn't know who the victim was for several hours??

Poor lady got f---ed in more ways than one.