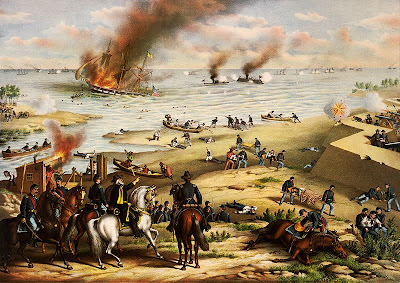 The American Civil War is not remembered for its naval engagements, and indeed there were very few of importance. The conspicuous exception was the Battle of Hampton Roads, which is better known as the clash between the revolutionary ironclads USS Monitor and CSS Merrimack.

By the time the smoke had cleared on those fateful days in March 1862, the face of naval warfare had been changed forever, drawing to an abrupt close the era of the

wooden-hulled ship as the great naval powers, of which the U.S. was not one, hastened to produce sleek iron-hulled ships with mounted heavy guns.

* * * * *
On April 19, 1861, in one of Abraham Lincoln's first acts as president, he proclaimed a blockade of all ports of the seceded Southern states to cut them off from the international trade they needed to survive.

Although Captain Charles McCauley had orders from Secretary of the Navy Gideon Welles to remove all Union ships from the Norfolk Navy Yard to Northern ports, he initially refused to act and then scuttled nine ships and burned parts of the yard. However, the screw frigate Merrimack burned only to the waterline, her engines remaining more or less intact.

The destruction of the yard was mostly ineffective and the Confederacy gained the South's largest shipyard and control of the forts and batteries at the junction of the Elizabeth and James rivers.

Among the earliest enthusiasts of armored warships was Confederate Secretary of

the Navy Stephen R. Mallory, who understood that the South could never match the highly industrialized North in numbers of ships, but could try to build better ones.

But there was no factory in the South that could quickly build the engines for ironclads, so it was suggested that engines from the Merrimack be salvaged for a revolutionary new ship that was christened the CSS Virginia and launched in February 1862. (Union sources continued to call the Virginia the Merrimack, and the name has pretty stuck.)

The Union, meanwhile, was slower on the uptake.

Welles did not get around to asking Congress for permission to use armored ships until August 1861, which resulted in the establishment of a so-called Ironclad Board that considered 17 different designs and chose three. The first to be completed was the USS Monitor, designed and built by Swedish engineer and inventor John Ericsson at his shipyard on the East River in Brooklyn.

Whereas the Merrimack was of a more conventional design and had an array of 10 guns of varying calibers and a ram fitted to her prow, it was large, unwieldy and slow.

The smaller and faster Monitor incorporated only two large-caliber guns mounted on a cylindrical turret covered with iron that rotated on a central spindle driven by a steam engine. There was, however, a major design flaw: The guns could not fire directly forward because of a small pilot house in front of the turret.

In an extraordinary feat of shipbuilding, the Monitor was actually completed a few days before the Merrimack, although the Confederate ship was activated first.

* * * * *
The Battle of Hampton Roads commenced on the morning of March 8 when the Merrimack steamed into the roads under the command of Flag Officer Franklin Buchanan and headed directly for the Union squadron. It opened fire on the Cumberland, which along with the Congress returned fire, but the rounds bounced off the Merrimack's iron plates.

The Merrimack then rammed and sunk the Cumberland, but not before nearly sinking herself when her ram got stuck in the enemy ship's hull. The ram broke off and Buchanan then turned his sights on the Congress, which was then grounded in shallow waters on orders of its captain and surrendered.

The Merrimack was not unscathed. Shots from Union ships had riddled her smokestack, further reducing her already low speed. Two of her guns were disabled and several armor plates had been loosened.

The Monitor, which had been rushed to Hampton Roads to try to protect the Union fleet, appeared the next day. At the helm was Lieutenant Catesby ap Roger Jones, who was tasked with protecting the grounded Minnesota. Buchanan had been wounded, and Lieutenant John L. Worden commanded the Merrimack as she again steamed into the roads and headed toward the Minnesota. 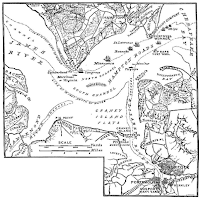 Worden at first ignored the Confederate ironclad, but realized that he had to fight her and positioned the Monitor between the Merrimack and Minnesota.

Over the next several hours, the ships essentially fought to a draw. The armor of both proved to be adequate and the battle ended only when a chance shell from the Merrimack hit the Monitor's pilot house, temporarily blinding Worden. In the ensuing confusion, Jones thought the Monitor was withdrawing. With the Minnesota out of reach because of the rising tide, the Merrimack withdrew.

Both sides claimed victory, but it was the Merrimack that finally was to be vanquished.

The Monitor remained on station, while the Confederate ironclad spent a month in drydock being repaired before it ventured out again. Over several weeks of posturing, the ships unsuccessfully tried to goad each other into attacking and the Confederacy decided to move the Merrimack up the James to the vicinity of Richmond after it was determined that Norfolk was of little strategic value because the blockade had held.

Without first consulting his superiors, Confederate Major General Benjamin Huger abandoned Norfolk on May 9, leaving the Merrimack stranded because her draft was too great to permit her to pass up the river. Rather than allow her to be captured or sunk by the Union, the ship was destroyed.

The Monitor also did not survive the war. While being towed to North Carolina on Christmas Day 1862 to take part in the blockade at Beautfort, she took on water in heavy seas and had to be abandoned.

While the showdown had settled nothing, the Monitor became the prototype for similar ships in several navies.

Lincoln ordered many more built, including smaller river monitors that played key roles in future battles on the Mississippi and James. Britain, France and Russia embarked on crash programs in what came to be known as "Monitor-mania," and the revolving turret design was to inspire future warships, including the modern battleship.