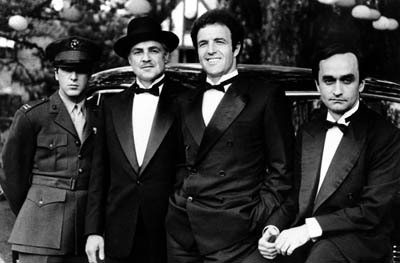 Paging Doctors Corleone! Stat!
At first blush, it seems a little extreme to compare a leading institution of higher learning to a Mafia family, but that is exactly what the University of Medicine and Dentistry of New Jersey has become.

While no one was looking, wrested the title from . Its love affair with bribes, kickbacks and influence peddling can be attested to by all of the politicians – from lowly municipal burghers to state senators and political party leaders – who are doing time in federal prisons.

These public officials are not to be confused with all of the mafiosi doing time in federal prisons for the same things. It's not for nuttin' that “The Sopranos,” the hit HBO television show, is based on a lovably lethal North Jersey crime family that traffics in bribes, kickbacks and influence peddling.

This brings us to the reason for why UMDNJ, ’s largest and supposedly most prestigious health-care institution, is doing a pretty good imitation of being a mob family.

UMDNJ has been so adept at bribing, kickbacks and influence peddling that it has been honored as the first university in the entire U.S. of A. to be overseen by a court-ordered federal monitor. Not even the Soprano family or the Corleone family of "The Godfather" fame had federal monitors.

The federal monitor was invited to the UMDNJ party because:

* Its politically-wired administrators have let an astonishing $700 millionin no-bid contracts, some of which also included kickbacks. Kind of like only doing business with merchants who pay you homage, better known as the Mafia street tax.

* Administrators have hired employees based not on their qualifications, but through use of a secret code identifying an applicant's political patron. The more powerful the patron, the lower the secret code number. Kind of like speaking Sicilian so that no one knows what you're up to.

* They schemed to bilk the federal and state governments out of millions in illegal Medicaid payments. Kind of like scamming old ladies of their inheritances.

Let’s remember that UMDNJ is not a trash-hauling business or labor union, two enterprises that are no strangers to mob influence. UMDNJ is a major teaching hospital. We’re talking brain surgery and root canals, not landfills and construction jobs.

It is that context that makes the federal monitor’s most recent discovery about this mobbed-up institution so mind blowing, even for New Jersey:

For several years, UMDNJ has paid 18 doctors -- including some of its most prominent -- up to $150,000 a year each in kickbacks to refer patients to its struggling cardiac surgery program at University Hospital in Newark.

That's right, these doctors sent patients to UMDNJ based on lining their own pockets, not what was best -- let alone what the best hospital was -- for the patients.

Furthermore, even with the kickback scheme University Hospital has performed so few surgeries that it lost its accreditation, including the right to train cardiac specialists. This is a big blow to a hospital system that needs to keep its high-level trauma center designation. Kind of like a mob hit.

Furthermore furthermore, the kickback doctors are listed as being on the university's faculty, but never teach courses.

Just as Kay begged Sonny to quit the mob in "The Godfather," UMDNJ administrators ignored warnings that the cardiac kickback scheme was improper and continued to bribe doctors to get patients. In fact, their entire response to the corruption allegations is like what Sonny said:

It's not personal, it's strictly business.

Posted by Shaun Mullen at 6:17 AM
Email ThisBlogThis!Share to TwitterShare to FacebookShare to Pinterest

Healthcare prices are a very important issue. Dental care is obnoxiously expensive in the US, combined now with corruption.