Book Review: The Soaring Triumph Of 'H Is For Hawk' By Helen Macdonald 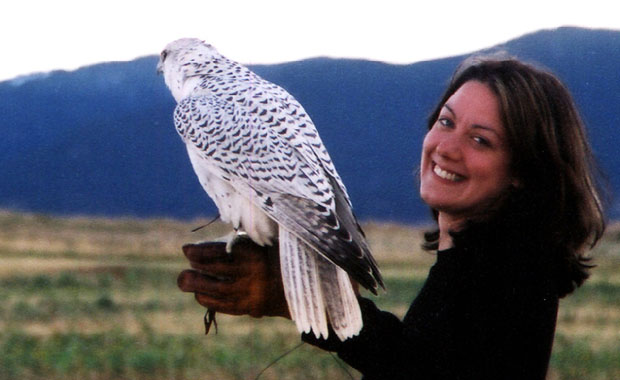 One of the joys of life at our mountain retreat are the hawks.

Red-tail hawks are everywhere, and sometimes where rabbits, mice and their smaller feathered friends don't want them to be.  There are red-shouldered and sharp-shinned hawks, as well as other raptors from magnificent and immense bald eagles and osprey to elusive owls and a delightful nesting pair of diminutive kestrel.  But there are no goshawks, who are fairly rare in North America but more plentiful in the United Kingdom and Europe, where they have been bred back from near extinction. 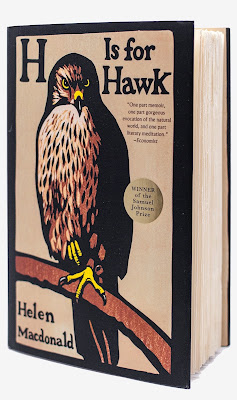 I've had a thing for goshawks for years.  They are big hawks, the largest members of the genus Accipiter. They are gorgeous and, how to say it, extraordinary killing machines whose ability to track down and capture prey is perhaps unrivaled in the bird world.  They can, for example, fly at breathtaking speeds upside down and reach up to grab prey.  They can be tamed but never domesticated.

My fascination with gossies led me to H Is for Hawk by Helen Macdonald, which was a genre-breaking runaway bestseller last year and the story of how the author adopted, raised and trained a goshawk whom she improbably named Mabel because, as superstition drenched hawkers believe, the more banal the name the better the bird will be.

H Is for Hawk turned out to be much more than an account of how Macdonald, a Cambridge lecturer and experienced falconer, purchased 10-week-old Mabel from an Irish breeder for £800 (about $1,100) to successfully training her to hunt using sometimes ancient methods.  She also writes at length and intimately of her deeply personal trials and tribulations, and that is both a good and not so good thing.

A big reason for the book's success is that it is as much a story of Macdonald going to pieces -- and very nearly succumbing to madness -- following the death of her beloved father, a Fleet Street photojournalist, her retreat from the human world, and healing emotionally through her kinship with Mabel.

As unsympathetic as it sounds, the not so good thing is that Macdonald's soliloquies on her unraveling and her innumerable crises -- hostility to strangers and friends, wild mood swings, crying jags and self pity, and innumerable psychic scratches and bruises accompanying the physical ones from her training regime with Mabel -- began getting in the way for me.  But without them H Is for Hawk would not be half the book it is, so I bucked up as MacDonald did.

At times Macdonald wants to become a hawk herself, "to fly with the hawk to find my father; find him and bring him home."  At other times she thinks she is becoming a hawk herself, and when she has slipped out of her great tattered hawking jacket and into street clothes, she is in disguise. 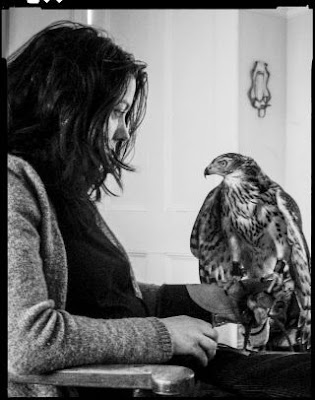 "The feathers down [Mabel's] front are the colour of sunned newsprint, of tea-stained paper, and each is marked darkly towards its tip with a leaf-bladed spearhead, so from her throat to her feet she is patterned with a shower of falling raindrops.  Her wings are the colour of stained oak, their covert feathers edged in palest teak, barred flight-feathers folded quietly beneath.  And there is a strange gray tint to her that is felt, rather than seen, a kind of silvery light like a rainy sky reflected from the surface of a river. . . . Those long, barred tail-feathers and short, broad wings are perfectly shaped for sharp turns and brutal acceleration through a world of woodland obstacles; the patterns on her plumage will hide her in perfect, camouflaging drifts of light and shade."

While falcon trainers are called falconers, hawkers are called austringers, and the language of the art is fascinating: Young hawks are eyasses, adolescents are passagers, and hawks caught as adults are haggards. They are held by the ankles by slim leather straps called jesses, and the hawk by the handler on gauntlets, gloves worn on the left hand.  Hawks in proper and fit condition for hunting are in yarak.  And so on and so forth.

Macdonald explains that Goshawks' volatile personalities are because the pathways between their sensory neurons and motor neurons pretty much bypass the brain.  Wow.

"They react to stimuli literally without thinking," she notes, and squeaky doors, passing bicyclists and extraordinarily even two dimensional black-and-white drawings of prey can provoke their hunting instinct. Mabel is even aroused by Joan Sutherland on the radio.

"I laughed out loud at that," writes Macdonald. "Stimulus: opera. Response: kill."

By the time H Is for Hawk winds to an end and Mabel is domesticated (but not tamed), Macdonald has taken us on a journey well beyond her grief and Mabel's matriculation. 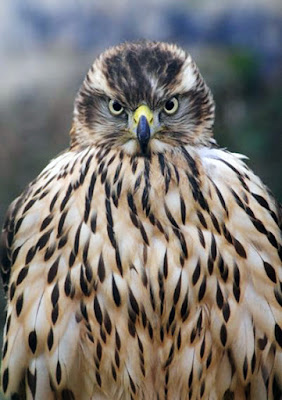 This is much more than a remarkable memoir, let alone a paen to the curative power of animals.  There are fascinating side trips through England, both merry olde and modern, the history of falconry and the world of T.H. White, a hawker and  beloved author of The Once and Future King, the series of Arthurian novels, who chronicles his unsuccessful attempts to flee his own failures as a person in The Goshawk, a book she read and reread as a child, as well as the perhaps inevitable exploration of the symbolism between woman and hawk.  (White was a failure as an austringer, but later became an accomplished falconer.)

Hunting with a hawk took Macdonald to the edge of being human:

"Then it took me past that place to somewhere I wasn't human at all.  The hawk in flight, me running after her, the land and the air a pattern of deep and curving detail, sufficient to block out anything like the past or the future, so that the only thing that mattered were the next thirty seconds. . . . The world gathered around me.  It made absolute sense.  But the only things I knew were hawkish things, and the lines that drew me across the landscape were the lines that drew the hawk: hunger, desire, fascination, the need to find and fly and kill."

H Is for Hawk is nothing less than a soaring triumph.

TOP IMAGE COURTESY OF GROVE ATLANTIC,
CENTER IMAGE BY CHRISTINA McLEISH
Posted by Shaun Mullen at 12:02 AM
Email ThisBlogThis!Share to TwitterShare to FacebookShare to Pinterest