Sean Penn Is Not A Journalist, But El Chapo Is A Criminal. I Am Too, So Arrest Me. 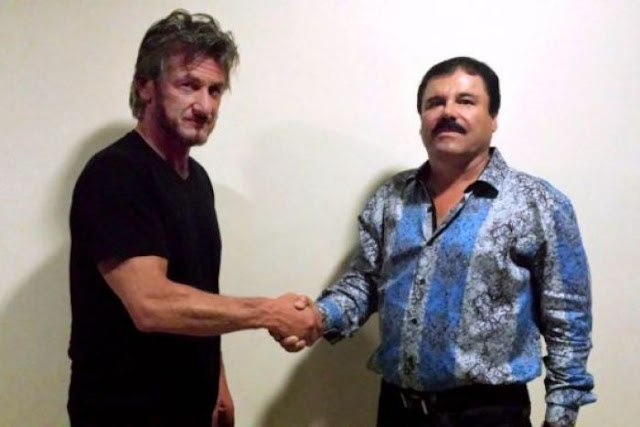 In the interests of full disclosure, I am a career journalist specializing in investigative stories and saw a guy run a stop sign on my way to write this blog post.  I did not turn around and chase down the motorist, nor did I call police to report his lawbreaking.  Nor do I believe actor Sean Penn should have ratted out Joaquín Guzmán Loera, the notorious drug kingpin known as El Chapo, as a consequence of his exclusive interview with him published by Rolling Stone magazine over the weekend.

The interview has generated the predictable barbs about Penn being a washed-up actor, as well as howls of protest from politicians and cluck-clucking from journalistic deep thinkers.

Speaking Sunday on ABC's "This Week," Republican presidential wannabe Marco Rubio acknowledged Penn's "constitutional right" to meet with Guzmán, who was on the lam after a made-for-Hollywood escape from a Mexican prison last year, but called the interview "grotesque."

Steve Coll, dean of the Columbia University Graduate School of Journalism, said he was concerned by the pre-publication editorial approval offered to Guzmán by Rolling Stone, while noting that "scoring an exclusive interview with a wanted criminal is legitimate journalism no matter who the reporter is."

I'm actually with Coll on the pre-approval aspect because I never -- nor should any journalist or publication ever -- agree to pre-conditions.  That was the no-negotiating deal when I or my reporters interviewed mobsters, some of them cold-blooded murderers, and other criminals on the lam back in the day.

But then Penn isn't just any reporter, he's not a reporter.  Nor was former pro basketball star Dennis Rodman when he went to North Korea in 2013 to chat up dictator Kim Jong-un, for Vice magazine.

Nevertheless, there's some pretty good stuff in the Rolling Stone article, although left unsaid is that Guzmán's arrest (again) will do nothing to curb the flood of dangerous drugs into the U.S., let alone remind us how bloody inane the War on Drugs is, because the strategy of busting drug lords is a fool's mission because American demand is insatiable.

Anyhow, Guzmán says began to grow marijuana and poppies at age 15 because there was no other way for his dirt poor family to survive.  He is unapologetic about all the blood shed as he amassed a fortune estimated at $1 billion, as well as a fleet of trucks, boats, airplanes and submarines. And Guzmán of course does not consider himself a violent man.

"Look, all I do is defend myself, nothing more," he told Penn. "But do I start trouble? Never."

As it turns out, Guzmán apparently had no interest in editing the article and was captured on the eve its publication, possibly because his meeting with Penn had been monitored by Mexican authorities, which led to an October raid on his compound in the state of Durango in which he evaded capture.

While I'm feeling all confessional, I should add that I harbored a Weather Underground fugitive in my home in the 1970s because he happened to be a friend and I strongly disagreed with the government's persecution and imprisonment of Vietnam antiwar protesters.  And I did cocaine in the 1980s and have been known to smoke marijuana.

PHOTOGRAPH FROM ROLLING STONE
Posted by Shaun Mullen at 12:03 AM
Email ThisBlogThis!Share to TwitterShare to FacebookShare to Pinterest