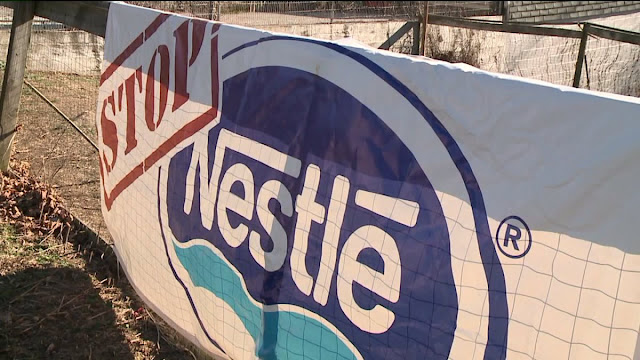 It has been said that the next world war will be fought over water, but in a rural northeastern Pennsylvania township a battle already is being waged between residents and an immense multi-national corporation that plans to pump hundreds of millions of gallons of spring water from the aquifer beneath their farms and homes.

Nestlé S.A. is the world’s largest food and beverage company, and it is no accident that a company with annual revenues larger than the GDPs of many countries has chosen tiny Eldred Township in the Pocono Mountains for two extraction wells that will pump 200,000 gallons of water a day for the Deer Park Natural Spring Water brand bottled by a subsidiary.

This is because the water is clean, plentiful  — and free.

A 20-ounce bottle of Deer Park costs $1.29 in area convenience stores, and back-of-the envelope calculations show that for a minimal investment, Nestlé can generate about $825,000 in revenue each day from the Eldred wells.  This translates into about $300 million a year and an astonishing $3 billion over the life of the 10-year mass extraction permit it is seeking from the state.

The compensation to Eldred residents from Nestlé would be exactly zero.

NO STRANGER TO CONTROVERSY OR THUGGERY

There is little question that Nestlé will prevail in Eldred.

The transnational corporation projects a benevolent image, but it usually gets what it wants and has weathered many scandals over the years as the price of doing business.

The most odiferous of the scandals was in the 1970s when it was revealed Nestlé was getting Third World mothers hooked on its infant formula despite being less healthy and more expensive than breast milk.  It backed down in the face of a boycott of its products — which range from chocolate and confectionery, frozen foods, coffee and dietary supplements to pet foods — and has since turned its attention to promoting bottled water, turning one of life's essentials into a global brand that only the better-off can afford while depleting a precious natural resource.

Nestlé has the largest bottled water market share in the world, with revenues of $7.3 billion last year from its Deer Park, Pure Life, Poland Spring, San Pellegrino and Perrier brands.

Eldred Township has a total area of barely 24 square miles and a mere 2,500 residents.  Kunkletown sits at the only crossroads, but it is a town in only a figurative sense with a smattering of shops and nary a stop light.  But there is lots and lots of water, and the township supervisors, not necessarily aware of the mischief of other township officials, helpfully green lighted Nestlé's application to site two wells on an 80-acre, privately-owned sand pit after a ban on mass water extraction in non-industrial zones in a regional planning code was quietly reversed in 2014.

Residents have formed a citizens group to fight Nestlé and four homeowners, joined this week by about 25 other residents, have filed suit against the township supervisors over the 2014 zoning change.  They say there already is anecdotal evidence that Nestlé's test wells are contaminating the wells of nearby property owners.

They can expect no relief from the agencies who will review Nestlé's permit application — the Pennsylvania Department of Environmental Resources (DEP) and the Delaware River Basin Commission (DRBC) — because the regulatory process is rigged and Nestlé holds virtually all the cards.

All of the hydrological tests and other data required in the permit process are provided by Nestlé.  There are no independent tests to assess the quantity and quality of the water.  Asked at a public meeting in Eldred on Wednesday evening how many mass extraction permits the DEP has rejected or required substantial modification to prior to approval, the agency's top Safe Water Drinking Permit Program official in northeastern Pennsylvania hemmed and hawed.

Pressed repeatedly to answer the question, his face growing increasingly red, he finally replied in a raspy whisper:

Eldred residents also can expect no help from local politicians.

The Poconos economy crapped out in the mid-2000s long before the rest of the nation, and for a while Monroe County led all counties in the U.S. in home foreclosures per capita.  This is because politicians, not content to try to build the tourist industry and brand the Poconos as a special place with beautiful woodlands chockablock with trails, waterfalls, creek and rivers, as well as golf courses, ski slopes and family-friendly resorts, climbed into bed with rapacious developers and usurious financial institutions after the 9/11 attacks to sell the Poconos as a safe haven from a world gone crazy.

People flocked to the area from the Bronx, Queens and northern New Jersey by the thousands after 9/11, but the gauzy illusion that the Poconos was a paradise soon gave way to a harsh reality of which wise locals already were well aware: There was an apathetic political establishment resistant to reform, many roads and bridges were in atrocious condition, social services were overtaxed, schools ranged from mediocre to poor, crime rates were well above Pennsylvania county-by-county averages for adult major crime, drunk driving and vehicular fatalities, there was an increasingly degraded environment, and stratospherically high local tax rates that have been crushing to all but the relatively few affluent residents.

If there has been a bright spot amid a chronically sick economy, it is water.

There has been a proliferation of water parks, which are supplanting ski slopes as the region’s largest tourist draw.  Five water parks have opened in recent years with more planned, which is not surprising when you consider that the parks' biggest expense, the enormous amount of water needed for their gigantic pools and slides, flow into the parks essentially free of charge because the taking and distribution of water is largely unnoticed, underregulated and the result of sometimes secret agreements between politicians and developers who are given tax breaks, zoning easements and handshakes for creating jobs, virtually all of which are minimum wage.

Water in the Poconos is clean and plentiful.  The Delaware, the largest undammed river east of the Mississippi, flows along its eastern border with New Jersey.  Nestlé has seven existing mass extraction sites in Pennsylvania, and bottlers have quietly pumped from Poconos aquifers for years to quench the thirst of people where water is a luxury and not taken for granted, or has been degraded as in Flint, Michigan, forcing people to buy water in bottles that are not biodegradable and add substantially to the enormous waste generated by a throwaway culture.  Nestlé's designs on Eldred is merely the latest water grab.

The weak and ineffectual Poconos political establishment has long been prey to powerful outside forces like Nestlé, and environmentalists fear that once the water is gone — and it will run out — an explosion of fracking will occur when the thousands of fracking sites in counties to the northwest are played out and energy companies turn their attention to the untapped oil and natural gas supplies in the rich shale beds beneath those woods and mountain streams.

The Pocono Record is the sole media outlet of consequence in the region.  It has ignored the story on its editorial page, seldom has a cross word to say about the ham-handed political establishment, and has been a slavish supporter of government giveaways to water parks.  One of the Record's few reporters has covered the Nestlé-Eldred story aggressively — and impartially —  but says his editors are being pressured by Nestlé to take him off the story.

THEY'RE SCREWED & THEY KNOW IT

The meeting on Wednesday evening was at the Eldred Fire Hall.  It was called by the township supervisors and billed as a question-and-answer session where officials from DEP and DRPA were to explain their mass water extraction permitting and regulatory processes.  Questions specifically pertaining to Nestlé were not allowed, but kept creeping in.

About a hundred people filled the firehouse meeting room, a darkened bingo board and the muted crackle of a fire radio providing the backdrop.

As the evening wore on, there was a palpable sense of bewilderment.  While the township residents attending included an environmental biologist, a medical doctor and a few other worldly wise burghers who had no illusion that the regulatory officials' presentation was a dog-and-pony show, it gradually dawned on others that they were being hoodwinked.

These are simple folk, and that is meant in a most positive sense.  They are hardworking.  Most own their homes and farms.  They are churchgoers, they vote, and they are proud of their community, its 274-year history and its traditions.  Many fish on the Aquasicola and Buckwa creeks and hunt in the state gamelands below Blue Mountain, which forms the eastern edge of the Appalachians.

They came to the meeting believing that the township supervisors had done them wrong, and while no one has spoken in support of Nestlé at previous meetings, hard feelings have been pretty much held in check. The homeowners who filed suit decided to keep things within the family and take the commissioners to a county court rather than fight Nestlé head on.

Eldred residents had faith in government, or at least enough to believe the state would turn down Nestlé because it would see that their way of life would come to an abrupt end with a massive pumping operation drawing down their water and possibly contaminating their wells, while convoys of diesel smoke-belching 18-wheel water tanker trucks clogged their narrow roads.  And no one knows what will happen when the water runs out, an eventuality not addressed in Nestlé's permit application or by the regulatory officials.

Residents left the meeting angry, shocked and disillusioned.  And many of them knew that even thought a final decision is probably months away, Nestlé already has won.