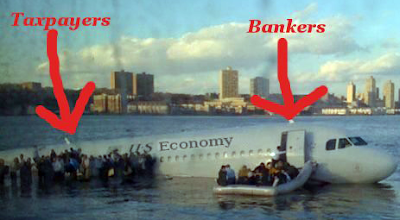 It's funny but even during the mayhem of Inauguration week, the image of that A320 being landed safely on the Hudson kept coming back to me. And when I read that its remains had ended up floating not far from Ground Zero, I couldn't help but marvel at the historical and civilizational symmetry of it all.

Over seven years ago, a group of religious extremists seized control of an aircraft in that same airspace, men who had very little flying experience and a philosophy of maximizing the deaths of innocent civilians on the ground. They did all they could to murder as many as they could in order to secure the maximum reward for themselves in heaven and in worldly renown.

Seven years later, two pilots who have since remained remarkably distant from media attention, were in a similar cockpit in the same crowded area and their over-riding concern was to prevent any civilian casualties at all. That's why they even avoided small airports which might have led to a crash into inhabited neighborhoods. With enormous expertise, gained by rigorous training in a civilized society, they managed to land safely on the river and save everyone both on board and on the ground.

It seems to me that dignity and training and expertise and humaneness are the values of our society at its best. All of them are self-evidently superior to the values of vainglory, amateurism, impulsiveness and cruelty that bedevil our enemies. If these are the grounds on which we fight this war - and they are ours to choose - then we will win. And we will deserve to. 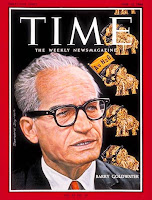 The face of conservatism used to be a happy face, a confident face, an optimistic face. I suppose its easy to be happy if you are winning elections but there was more to it than that, more to it than even the fact that the naturally sunny disposition of Ronald Reagan was at the head of the movement. That optimism and happiness was born in the give and take of debate when Big Ideas -- consequential, important ideas -- were the stuff of bull sessions, conferences, panel discussions, and papers published at the various think tanks. All factions of conservatism had their say. There was passionate disagreements over everything. But somehow, we never lost sight of the goal -- building a conservative movement where ideas translated into government action.

Somewhere along the way, we gave into the temptation to use conservative ideas to divide rather than unite. This tactical decision brought electoral success but at a price. It gave social conservatives and their splenetic base a platform to dominate the movement and the Republican party. The price for that mistake is still being paid. 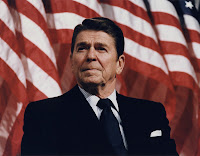 The Republican Party that is in such disrepute today is not the party of Reagan. It is the party of Rush Limbaugh, of Ann Coulter, of Newt Gingrich, of George W. Bush, of Karl Rove. It is not a conservative party, it is a party built on the blind and narrow pursuit of power.

Not too long ago, conservatives were thought of as the locus of creative thought. Conservative think tanks (full disclosure: I was one of the three founding trustees of the Heritage Foundation) were thought of as cutting-edge, offering conservative solutions to national problems. By the 2008 elections, the very idea of ideas had been rejected. One who listened to Barry Goldwater's speeches in the mid-'60s, or to Reagan's in the '80s, might have been struck by their philosophical tone, their proposed (even if hotly contested) reformulation of the proper relationship between state and citizen. Last year's presidential campaign, on the other hand, saw the emergence of a Republican Party that was anti-intellectual, nativist, populist (in populism's worst sense) and prepared to send Joe the Plumber to Washington to manage the nation's public affairs. 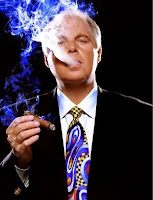 But do you ever hope he fails? Knowing his failure is the country's failure? Isn't that, well . . . disloyal?

The irony is that Limbaugh and the other clowns would have you believe they are bedrock defenders of this country, that they love it more than the rest of us, more than anything.

That's a lie. Limbaugh just told us so, emphatically.

It's not the country they love. It's the attention. The ideology, their perversion of conservatism, is but a means toward that end.

The austerity of Obama’s Inaugural Address seemed a tonal corrective to the glitz and the glut. The speech was, as my friend Jack Viertel, a theater producer, put it, "stoic, stern, crafted in slabs of granite, a slimmed-down sinewy thing entirely evolved away from the kind of Pre-Raphaelite style of his earlier oration." Some of the same critics who once accused Obama of sounding too much like a wimpy purveyor of Kumbaya now faulted him for not rebooting those golden oldies of the campaign trail as he took his oath. But he is no longer campaigning, and the moment for stadium cheers has passed.

If we’ve learned anything since the election, it is this: We have not remotely seen the bottom of this economy, and no one has a silver bullet to arrest the plunge, the hyped brains in the new White House included. Most economists failed to anticipate the disaster, after all, and our tax-challenged incoming Treasury Secretary may prove as evanescent as past saviors du jour.