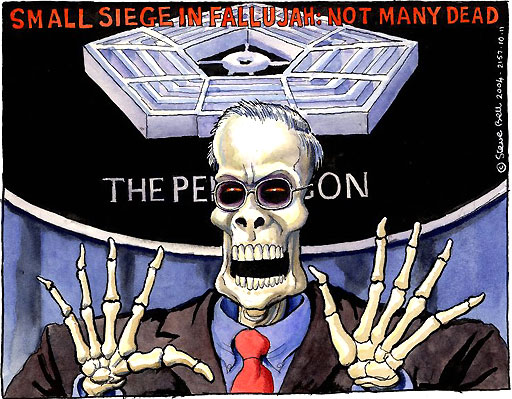 The worse the news is in Iraq, the more discredited Defense Secretary Donald "Stuff Happens" Rumsfeld's stewardship of the Pentagon and the war becomes, and the harsher the criticism from people in the know -- not merely the Big Bad Liberal Media -- the more Rummy says everything is okey-dokey and the tighter he clings to power and to the munificent, all-forgiving King George's purple robes. And, of course, nothing changes.

This is what I have come to call the Rumsfeld Sydrome.

We can add the name of Paul D. Eaton to the chorus of harsh critics. Eaton is not just another potshotter. He devoted his life to the Army before retiring with the rank of major general. His last assigment: Being in charge of training the Iraqi military.

Here are excerpts from a blistering op-ed column that Eaton penned for the New York Times:

American soldiers en route to Britain before D-Day were given a pamphlet on how to behave while awaiting the invasion. The most important quote in it was this: "It is impolite to criticize your host; it is militarily stupid to criticize your allies."

By that rule, Defense Secretary Donald Rumsfeld is not competent to lead our armed forces. First, his failure to build coalitions with our allies from what he dismissively called "old Europe" has imposed far greater demands and risks on our soldiers in Iraq than necessary. Second, he alienated his allies in our own military, ignoring the advice of seasoned officers and denying subordinates any chance for input.

In sum, he has shown himself incompetent strategically, operationally and tactically, and is far more than anyone else responsible for what has happened to our important mission in Iraq. Mr. Rumsfeld must step down.

Only Gen. Eric Shinseki, the Army chief of staff when President Bush was elected, had the courage to challenge the downsizing plans. So Mr. Rumsfeld retaliated by naming General Shinseki's successor more than a year before his scheduled retirement, effectively undercutting his authority. The rest of the senior brass got the message, and nobody has complained since.

First, President Bush should accept the offer to resign that Mr. Rumsfeld says he has tendered more than once, and hire a man who will listen to and support the magnificent soldiers on the ground. Perhaps a proven Democrat like Senator Joseph Lieberman could repair fissures that have arisen both between parties and between uniformed men and the Pentagon big shots.

More vital in the longer term, Congress must assert itself. Too much power has shifted to the executive branch, not just in terms of waging war but also in planning the military of the future. Congress should remember it still has the power of the purse; it should call our generals, colonels, captains and sergeants to testify frequently, so that their opinions and needs are known to the men they lead. Then when they are asked if they have enough troops — and no soldier has ever had enough of anything, more is always better — the reply is public.

Our most important, and sometimes most severe, judges are our subordinates. That is a fact I discovered early in my military career. It is, unfortunately, a lesson Donald Rumsfeld seems incapable of learning.

Posted by Shaun Mullen at 1:25 PM
Email ThisBlogThis!Share to TwitterShare to FacebookShare to Pinterest