Queensland After Larry: A Bloody Miracle 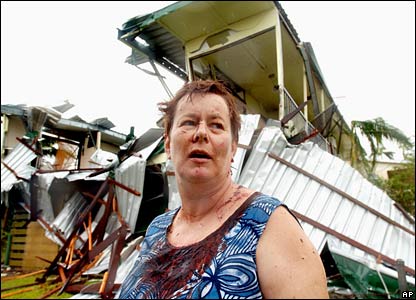 I am desperate for good news today, hence this post on what I consider nothing less than what I will call a bloody miracle: The fact that Queensland, the northeastern Australian state, survived Cyclone Larry, which was as powerful as Hurricane Katrina, without a single death.

Several visitors to Kiko's House, living up to the Aussie rep as the most argumentative people on the planet, have attempted to puncture my amazement by noting that:

* Queensland is a sparsely populated area, whereas New Orleans and the U.S. Gulf Coast is not. (The Katrina death toll stands at about 1,400, although the occasional body continues to turn up.)

* The various political leanings of the Queensland state and Australian national governments is somehow a factor, albeit an unexplained one, of the absence of carnage.

* Many Aussies who do not live in Queensland consider people from there to be from another planet. (The state capital, Brisbane, is derisively referred to as Brisvegas, and the slurs go downhill from there.) So, Queensland's separate and unequal status therefore reduces the story from miracle status to a big, fat "So what, Mate?" I suspect that all of this bashing is actually envy that survivors are throwing enormous weekday barbies (barbeques) to cook off the meat from freezers knocked out by Larry's 180 miles per hour winds.

In any event, this Yank ain't buying.

One out of every three houses in Queensland loses its roof, virtually all crops are destroyed and only 30 people suffer minor injuries and no one dies? I don't care what anyone says. That is a bloody miracle.

Meanwhile, the Melbourne Age has a picture gallery of storm damage which you can link to through its homepage, while the Sydney Morning Herald has several stories.

I did have a much needed laugh when I read that President Bush, of all people, had phoned Australian Prime Minister John Howard to offer some hurricane "tips."

Given the mess Bush made of the Katrina response, that took real yarbles, and if you're not an Aussie I'm sure you can guess what they are.

"Chow" from South Sidney says that another slightly less powerful cyclone (Force 4 instead of Force 5) is bearing down on Queensland and if it makes landfall, which would be later on Wednesday local time, it will hit to the south of Larry where comparatively more people live.
Posted by Shaun Mullen at 10:47 AM
Email ThisBlogThis!Share to TwitterShare to FacebookShare to Pinterest