Thank You, Women of America, For Putting Republican Politicians In Their Place 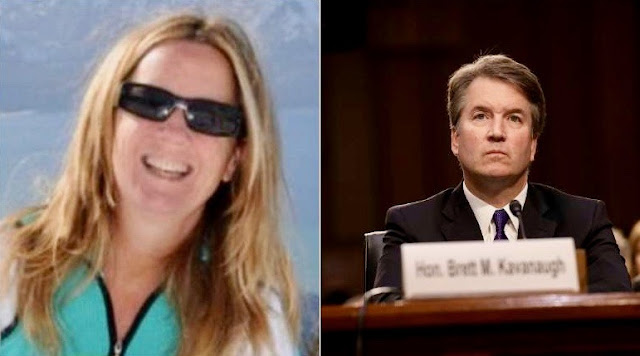 In the 24 hours since I went out on a limb and predicted that Brett Kavanaugh's nomination to the Supreme Court was dead, events have moved quickly and dramatically.

That does not necessarily mean that my position has been validated, but we have gone from a sure thing to a televised showdown next Monday between a practiced liar and the woman he tried to rape with powerful echoes of the Clarence Thomas-Anita Hill debacle 28 years ago, yet dramatically different.  The difference is that women are fighting back against sexual harassment and "routine" societal degradations and the mostly Republican politicians who have routinely downpressed them, to use Bob Marley's divine term, are now in abject fear of losing their hold on power because of them.

Doubt not that those men (and all 11 Republicans are men, while four of the 10 Democrats are women) are approaching the appearance of Christine Blasey Ford before the Senate Judiciary Committee with torches and pitchforks disguised as bouquets of roses and boxes of chocolates.

Still, do not expect a repeat of the 1991 Thomas confirmation hearings when Hill accused her then-supervisor at a government agency in graphic detail of incidents of sexual harassment and it was Thomas and not she who was treated as the victim by Republican and Democratic pols alike.  Thomas was confirmed and, of course, has gone on to be a profoundly reactionary and not particularly bright justice who has given new meaning to the term Uncle Tom.

The #MeToo movement has been a huge force in bringing down Roy Moore and some nine members of Congress with zipper problems in recent months, as well as celebrity beasts like Harvey Weinstein and Leslie Moonves.

According to Ford's detailed, compelling and truthful account (according to a polygraph test), a stumbling drunk Kavanaugh, then 17, attempted to rape Ford, then 15, by turning up music in an upstairs bedroom to drown out her protests, pinned her on a bed, clumsily attempted to pull off her one-piece bathing suit and the clothing she wore over it as he groped her with one hand while covering her mouth with the other hand to silence her after she screamed in the hope that someone downstairs would hear her.

Mark Judge, a friend and classmate of Kavanaugh's, stood across the room laughing "maniacally" before he jumped on top of them, Ford tried unsuccessfully to wriggle free and then Judge jumped on them again, sending all three of them tumbling and enabling Ford to flee downstairs to safety.

"I thought he might inadvertently kill me," The Washington Post quoted Ford as saying. "He was trying to attack me and remove my clothing."

Yes, teenagers are sometimes held to impossibly high standards.  But this not only is a textbook example of attempted rape, but Kavanaugh's denial is right out of the Donald Trump playbook.

That is, it is a denial utterly devoid of specifics.  No "Yes, I recall that party but I was never upstairs, let alone with Ms. Ford, whose name I only learned the other day."  Maybe,  just maybe, this is because he was so raving drunk (was there myself a couple of times as a teenager) that he doesn't remember anything other than having to hide his semen-stained underpants from his mother the next day.

Meanwhile, at midday yesterday, Judiciary Committee chairman Charles Grassley was resisting calls, including some from Republicans, to postpone a slam-dunk confirmation vote on Kavanaugh on Thursday.

By late afternoon, after hurried consultations with the White House and GOP leadership, Grassley hastily announced that Ford had been invited to testify on Monday, as well as Kavanaugh, which should be interesting because he will be testifying about something he continues to oh-so-indignantly claim never happened.

Ford, for her part, raised the stakes by wisely saying she won't testify until the FBI first looks into what happened, throwing the Monday circus and her appearance into doubt.

An investigation should be "the first step," she explained, before she is put "on national television to relive this traumatic and harrowing incident," although Republicans have said there will be no FBI investigation and a Monday hearing will not be rescheduled.

There were several reasons for Grassley's hasty reversal of field:


A tacit acknowledgement of the rising Democratic tide, which threatens to engulf the House and now even the Senate in the midterms with that record number of woman candidates.

More specifically, the threat of energized woman voters motivated less by Republican degradations than sending a message to Trump by voting his proxies out of Congress.

An effort to keep Republicans supportive of an appearance by Ford and chary of Kavanaugh, who is widely regarded as a deeply flawed nominee, from leaving the reservation.

"What about other witnesses like Kavanaugh's friend Mark Judge?" Feinstein asked, cutting to the chase.  "What about individuals who were previously told about this incident? What about experts who can speak to the effects of this kind of trauma on a victim?"

Committee Republicans will, of course, try to block Democratic efforts to call additional witnesses as a way of sidestepping testimony from Judge, a self-confessed blackout drunk back in the day who could cause the nominee great harm.

The Sexual Predator in Chief is, of course, is the wild card in all of this.

Trump won’t let go.  Trump won't admit he's wrong.  Trump won't abandon a fellow sexual predator and characterize Kavanaugh as the victim as he does himself at every inopportune shuffling of the deck.  But an explosion from Trump about Ford, and he has called all sorts of women vile names over years of temper tantrums, could blow up the nomination.

Posted by Shaun Mullen at 8:00 AM
Email ThisBlogThis!Share to TwitterShare to FacebookShare to Pinterest

I wish more women had voted in their best interests in the 2016 election, but better late than never, I hope.

From your lips to Goddess's ears.


Most media accounts of Kavanaugh's assault actually give him benefit of the doubt by framing it as a drunken episode. But the planning that preceded it - pushing her into a room, turning up music to drown out screams - reveal terrifying clarity with which he committed a crime.

Yes, by all means let's give the benefit of the doubt to a man who, in innumerable legal opinions and briefs, has not allowed women even that simple courtesy in how they choose to conduct their lives.

Alas, I now feel listening to cable and following GOP strategy that they'll get enough of a fig leaf to shove this through. I called my Senators yesterday to make sure my voice was counted against his nomination. Latest on cable is he had a 9 hour coaching session at the White House, which wants him not to go after her but to stress his own version and denial. White House will bring a slew of women forward maybe even in an event to defend him, people who knew him. (Of course someone could murder someone and get 30 people to say the never had a problem with the murderer.)

My guess is that the drunken friend may have unintentionally prevented a rape. If he was "laughing maniacally" and then jumped *twice* on both Kavanaugh and the victim, it seems to me that instead of seeking seeking sexual gratification, he was performing a kind of mock sexual attack on both of them that he thought would be hilarious. Ford feared for her life, but after being knocked off the bed she was able to escape, perhaps because the boys at that point were overcome with laughter. Some teenage boys think it's great fun to fake hump a male friend, especially when drunk. In no way am I trying to elevate what the friend did but just get a handle on how a terrifying situation (from Ford's perspective) played out.

Mark Judge is the key to the question of whether a would-be rapist becomes a Supreme Court justice. That is why great energy will be expended by Kavanaugh's allies to try to keep him from shooting off his mouth.