Comey Sacrificed His Integrity & Independence. His Memoir Won't Get Them Back.

James Comey is someone you either love or hate.  Or in my case, some of both.  As FBI director, he repeatedly stood down Donald Trump through the president's bare-knuckeled attempts to get him to quash the investigation into Russia's interference in the 2016 presidential election.  But he was quick to investigate Hillary Clinton for her use of a private email server while secretary of state and painfully  -- and unforgivably -- slow to take seriously the Kremlin's attack on a bedrock of American democracy.

That is where we are on the eve of publication of the most anticipated memoir of a public official in many years -- A Higher Loyalty: Truth, Lies and Leadership -- which Comey has declared is all about his showdown with 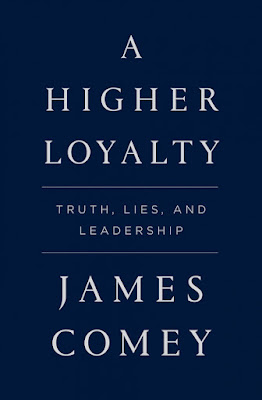 Trump, whose grotesquery of a presidency is increasingly at risk because of the investigation being led by Special Prosecutor Robert Mueller, who in the 11 months since Comey's unceremonious ouster has been bearing down on this singularly awful man as he flails like a wild animal caught in a trap.

Comey's memoir shot to the to the top of Amazon's bestseller list weeks before it's April 17 publication, and a speaking appearance in New York City later in the month prior to a national tour is fetching scalped ticket prices rivaling those for hit Broadway shows.

The book and tour will earn Comey a lot of money, but will not settle any arguments.

What they will do is further enflame a right-wing sycophancy that views Comey as the Albert Speer of a deep-state plot to delegitimize Trump and for Clinton supporters call into further question how the hell he repeatedly made decisions regarding publicizing the Clinton investigations while sitting his 6-foot-8-inch self on the FBI's investigation into Kremlin interference and Trump campaign collusion, which prompted his infamous remark to a congressional committee that "It makes me midly nauseous to think that we might have had some impact on the election."

Not to mention the country.

For many of us, Comey's reputation as a good guy was memorably cemented on March 10, 2004.  Attorney General John Ashcroft lay ill in an intensive-care room at George Washington University Hospital when an urgent call went out to his deputy, who happened to be Comey.

White House Counsel Alberto Gonzalez and President Bush's chief of staff, Andrew Card, were on their way to the hospital to persuade a barely conscious Ashcroft to reauthorize Bush's domestic surveillance program, which the Justice Department had just determined was illegal.  Comey notified the FBI director . . . yes, Robert Mueller and then raced, sirens blaring, to Ashcroft's bedside, barely beating Gonzalez and Card.

Ashcroft, summoning the strength to lift his head and speak, refused to sign the papers they brought.  Gonzalez and Card, who never acknowledged Comey's presence in the room, turned heel and left.

I never felt that Comey was being partisan then or in 2016.

Comey is nobody's fool but his own in now trying to protect -- or perhaps rehabilitate -- an image we will be reading plenty about in A Higher Loyalty.  But he ended up sacrificing his integrity in an historic fit of sanctimony as he juggled the Clinton private email server and Russian election interference investigations in the heat of the 2016 election -- the former not a scandal and the latter very much one -- in the end losing his independence, as well, as he heard the sound of Republican jackboots.

Comey knew that he would be attacked as a coward and worse by Republicans if he didn't go against an FBI policy dictating that investigators not speak publicly about why they are not bringing charges in a particular case.  And so on July 5, 2016, he publicly rebuked Clinton at a surprise news conference for being "extremely careless" but said he had recommended no criminal charges be brought in connection with her handling of classified information as secretary of state, including emails on that private server.  This ostensibly lifted a cloud from her campaign.

And Comey still was vilified, not the least of all by the Republican presidential nominee in waiting, whose campaign already had been infiltrated by his best friend Vladimir Putin and would go on to repeatedly call him a "showboat" and "grandstander" once he had plopped his big ass in the Oval Office.

Then, on October 28, just 11 days before the election, Comey overruled Justice Department officials and threw the flagging Clinton campaign into crisis in telling Congress that the FBI was reopening its investigation because of new emails found on a laptop computer belonging to former Congressman Anthony Weiner, whose estranged wife was a top Clinton aide.

Finally, on November 6, less than 48 hours before the polls were to open, Comey announced that after an "intensive review" of the "new" emails, they were found to be either personal or duplicates of those previously examined, and that the FBI had not changed the conclusions it reached in July in exonerating Clinton.

Most importantly -- and the biggest reason that history will not be installing Comey in the pantheon of law enforcement greats along with his buddy Mueller -- is that on both October 28 and November 6, the sound of those jackboots still ringing in his ears, Comey said nothing about the FBI's ongoing investigation into Russian election interference, let alone that it had all but confirmed the Trump campaign's ties to it.

This prompted Comey's "mildly nauseous" hankie wringing six months later, as well as endlessly and ultimately fruitless speculation about whether Clinton would have won both the popular and Electoral College votes if the FBI director hadn't gotten in his own way.

"He can't undo what he did," says Philippe Reines, who played Trump in debate practice against Clinton during the campaign.  "You can’t be a savior when you’re undoing your own mess.  It's like giving a fireman a medal for his work as an arsonist."

Posted by Shaun Mullen at 3:22 PM
Email ThisBlogThis!Share to TwitterShare to FacebookShare to Pinterest