West Meets East: Stormy & Vlad Make It Clear That It's All About Sex & Blackmail

What do Stormy Daniels and Vladimir Putin have in common?  More than you might think.

A president who in at least three instances has paid women substantial sums of hush money through surrogates and a frenemy in Putin who, as ex-British spy Christopher Steele wrote in his infamous dossier, has evidence of Trump's "sexual perversion" that can be used to manipulate him.  And, in my view, has been doing just that with another kind of hush money -- unquestioning obeisance in the face of the Kremlin's extraordinary assault on American democracy in the 2016 election and likelihood of an encore performance in 2018 that Trump seems disinclined to want to stop.

It should go without saying that a president susceptible to blackmail is a security risk, leaving us even more vulnerable to the demons of a sicko as scandal after scandal washes over him and he sinks ever deeper into legal jeopardy.

IT IS NOTABLE THAT IN THE VAST SWEEP of the crap and corruption that Trump has visited on America, the Stormy Daniels story actually barely qualifies as a scandal.

Yes, we are fucked . . . er, in truly dreadful shape as a nation when the people who should be most outraged by the president's pussy-grabbing exploits -- Evangelicals -- have made a deal with the Devil by declaring that everyone sins and God (their God anyway) has forgiven him despite breaking, by my count, at least seven of the Ten Commandments.

Daniels (whose real name is Stephanie Clifford) and Putin have something else in common: They are smart, clever and then some, and know they can play Trump like a cheap violin.  In Daniels' case, this includes enlisting a lawyer who has run legal circles around Michael Cohen, the president's longtime fixer.

Keith Davidson, Daniels' previous lawyer got Cohen to agree to a nondisclosure agreement (NDA in legalspeak) dated October 28, 2016, 11 days before the election, in return for $130,000 he paid Daniels though a dummy corporation to keep her piehole shut about an affair that began in 2006 at a Lake Tahoe celebrity golf event and continued well into 2007 and is now null and void.  This, according to her new lawyer Michael Avenatti, is because (oops!) Trump himself never signed the NDA and the signature line where he is supposed to have done so under the alias "David Dennison" is blank.  (Daniels is referred to as "Peggy Peterson.")

This has, in turn, prompted Peterson . . . er, Daniels to sue Cohen and assert that she no longer has to hush about what the suit calls her "Hush Agreement" and that Trump deliberately failed to sign the NDA because he wanted to maintain deniability about the affair.

While you chew on that delicious morsel, consider this one: Besides being a sex scandal, we've got a campaign finance scandal.

Wait!  It gets better.

The NDA stipulates that Daniels agreed to turn over to Trump certain so-called "property," including still images (wince), video images (double wince), paintings, Facebook postings, Instagram messages, text messages and emails.  She was not even allowed to keep a copy of the agreement.  Trump was required to report ownership of this property on his federal financial disclosure forms, but of course did not.

Cohen's claim that he paid off Daniels all on his own doesn't wash because he used a Trump Organization email account in early negotiations with Daniels.  He has a longtime professional relationship with Trump, who under the Hush Agreement clearly is a party to the deal, which may be a violation of New York legal ethics rules.  As would be any effort by Cohen to make Daniels think that she was dealing with Trump when she was not.  (Oh, and the bank that wired the $130,000 to Daniels flagged the transaction as suspicious and reported it to the Treasury Department.)

In any event, Daniels has kept her part of the deal but Trump has welshed on his.  So what's new? 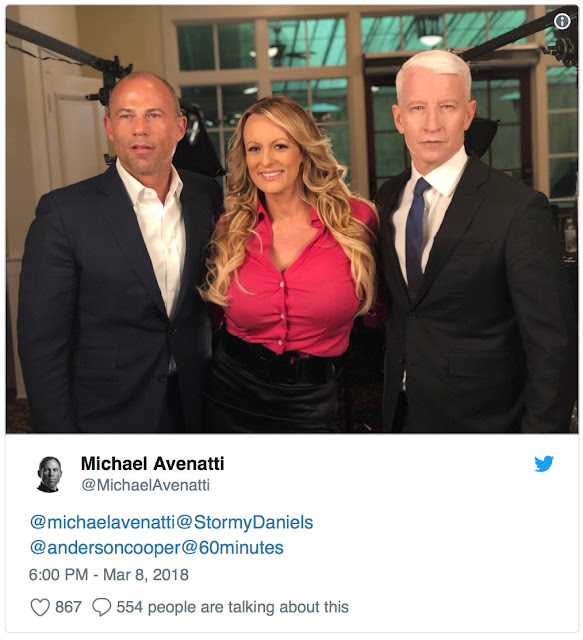 THE SCANDAL MAY SEEM LIKE A REALITY SHOW, but unlike The Apprentice, it's not going to go away at the end of the season.

People with longer memories than Trump will recall that it was a sexual harassment lawsuit brought by Paula Jones, an Arkansas state employee, against Bill Clinton for repeatedly hitting on her when he was Arkansas governor that nearly brought down his presidency.  (Impeachment can do that.)  Clinton agreed to an out-of-court settlement, paying Jones and her lawyers a sweet $850,000 to drop the lawsuit not because he was guilty, or anything, but so he could move on with his life.  (Cough, cough.)

Just when it looked like the Daniels scandal might retreat into the shadows, joining the Rob Porter debacle and other recent White House conflagrations, Cohen stepped in it again, followed by Trump press secretary Sarah Huckabee Sanders, who for the record is the daughter of an Evangelical minister.

Cohen won an emergency temporary restraining order (TRO in legalspeak) from an arbitrator barring Daniels from speaking out, which prompted Sanders to tell reporters at a press briefing last week with a practiced na na na nah na snear that "arbitration was won in the president's favor," effectively exploding heads throughout the West Wing because it was the first time anyone at 1600 Pennsylvania Avenue had conceded that Trump was involved with Daniels.

The TRO and lawsuit open the door to the whole magillah landing in court, raising the Triple X-rated prospect of Trump being deposed if the NDA is declared invalid, which would stir Trump's numerous other sexual . . . uh, interactions and hush money payoffs into the mix just as Clinton's other interactions were addressed in the Paula Jones case.

Meanwhile, Daniels has taped an interview with Anderson Cooper to be broadcast on 60 Minutes.  (Jones was interviewed by Sam Donaldson on Prime Time Live in 1994.)

The interview is tentatively scheduled for airing on March 18 unless lawyers for Cohen (which is to say Trump) decide to go to court to block CBS News by seeking to make the TRO permanent.  In 2011, Cohen was successful in stopping In Touch Weekly from publishing an interview with Clifford after threatening legal action.  The magazine finally published the interview last month after the Wall Street Journal broke the story of Cohen's $130,000 payment.

"Our aim and our messaging is very simple," Avenatti said on Sunday in taunting the White House.  "We're going to shoot straight, we're going to provide evidence and facts, and we are going to consistently advocate for the American people being able to make their own decisions as to who’s telling the truth and who’s lying to them.  She wants a forum to tell her version of events and let the chips fall where they may."

Seventeen months after Cohen sought to silence Daniels, she is controlling the narrative, something the president is accustomed to doing, but getting her lawsuit into a public court is a yuge hurdle, as David Dennison himself might say.

While I am confident there really is a God and not just some guy with a long, white beard whose robes those Evangelicals hide their unholy hypocrisy behind, my guess is that an out-of-court agreement will be hammered out.  And if we get really lucky, we can rid ourselves of Cohen and Sanders in the process, if not Trump himself -- at least for the time being.

Click HERE to read "Melania Trump May Be
The Only Person Capable Of Blowing Up The Presidency."

Posted by Shaun Mullen at 6:10 PM
Email ThisBlogThis!Share to TwitterShare to FacebookShare to Pinterest

I also read that Cohen told ABC News “the funds were taken from my home equity line and transferred internally to my LLC account in the same bank.” (!) Gee, what any incredibly kind & thoughtful lawyer, to do this for his innocent client.

Gosh, can't a pathological narcissist have any fun at all?