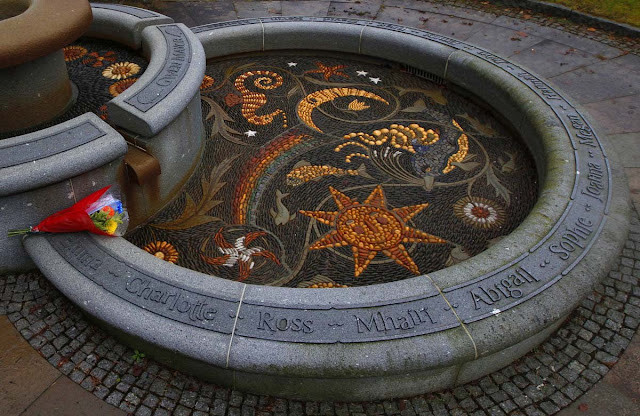 A MEMORIAL TO MASS SHOOTING VICTIMS IN DUNBLANE, SCOTLAND

Australia, the United Kingdom and United States are all relatively prosperous English-speaking lands with diverse populations and long histories of fidelity to the rule of law.  Why then did Australia and the U.K. pass strict gun control laws following mass shootings that have been hugely effective while the U.S. has been incapable of effecting even modest controls despite a carnage that grows larger by the year?

The short answer is that while Aussie and British politicians have many of the shortcomings and foibles of their Yankee peers, they are more likely to put aside their fealty to the special interests who bankroll them when there is a national crisis that demands action.

The longer answer will be deeply depressing to anyone seeking to stanch the epidemic of gun violence in America, including mass shootings like the Las Vegas, Orlando and San Bernardino massacres that occur with numbing if shocking regularity.

U.S. politicians cling to their special interests no matter the severity of a crisis, Republicans and the National Rifle Association being the most odiferous current example.  U.S. conservatives, almost to a man and woman, oppose any comprehensive controls on guns even in the midst of the current crisis, while Congress has effectively immunized gun manufacturers against personal injury lawsuits.

Australia and the U.K. were not saturated with guns even before strict gun control laws, while there are a mind boggling 300 million of them in the U.S.  (A record 2 million guns were purchased in December 2012 following President Obama's reelection and the Sandy Hook shootings.  Natch.)   This makes confiscation and buyback schemes ineffective, and combined with gun ownership being a long cherished American right, the lockstep opposition and loyalties of conservatives make dealing effectively with gun violence pretty much impossible.

Just how bad are things?

In Australia and the U.K., only about one in a million people die from gun homicides each year, while in the U.S. about 31 in a million succumb.  For American men 15 to 29, gun homicides are the third leading cause of death, after accidents and suicides.  The Paris terror attacks in November 2015 killed 130 people, nearly as many as die from gun homicides in all of France, which has strict gun laws, in a year.  (The rate of gun violence in drug war-ravaged Mexico is the highest in the world, about 122 people in a million, while some countries in the Middle East have higher rates than the U.S.)

Although conservative governments were in power when strict gun control laws were passed in Australia and the U.K. and conservative Republicans have effectively blocked efforts to deal with the U.S. gun epidemic, it was Jerry Brown who in 2013 vetoed a bill intended to eliminate loopholes in a California law that allowed Syed Rizwan Farook and Tashfeen Malik to easily obtain the two semiautomatic assault rifles used in the San Bernardino massacre in December 2015.

Brown, a Democrat and perhaps the most liberal of governors, said the benefits would not outweigh the cost to gun owners' rights, so conservatives, let alone Republicans, are not entirely to blame.

The reaction was swift after a deranged 28-year-old man with an AR-15 carbine massacred 35 people in the Tasmanian port town of Port Arthur in April 1996.

A new law -- the National Firearms Agreement -- was quickly enacted.  It prohibited automatic and semiautomatic assault rifles and pump shotguns, tightened licensing rules, established a 28-day waiting period for gun purchases, created a national gun registry and instituted a buyback program that removed more than 20 percent of firearms from public circulation.  There have been no mass killings in Australia since.

Total intentional gun deaths fell by half in the decade after the 1996 restrictions even as Australia's population grew nearly 14 percent.  Meanwhile, the rate of gun suicides per 100,000 people dropped 65 percent from 1995 to 2006, and the rate of gun homicides fell 59 percent.

The British government was spurred to ban private ownership of automatic weapons and handguns when 16 children were killed in a school gym in Dunblane, Scotland in March 1996 by a 43-year-old man brandishing four handguns.

Although guns were not a major problem in Scotland before the shooting, the laws enacted afterward have increasingly helped the police to fight crime.

In Scotland, a nation of 5.3 million people, the weapon of choice for criminals is the knife, while guns are used by farmers and hunters.  Of the 60 or so homicides homicides in the country in 2015, only one or two were by shooting.  Few police officers are armed, and the last time an officer was killed on duty through criminal violence was June 1994.  He was stabbed to death.

WHAT'S A NATION TO DO?

The profound perversity of our violence-glamorizing and gun-sick culture, as well as the way gun manufacturers, dealers and the NRA have played politicians and the system for immense, blood-soaked profits becomes ragingly obvious when viewed from an historic perspective.

Yes, the Second Amendment is peculiarly worded.  But there can be no question whatsoever that when the Founding Fathers wrote

A well regulated Militia, being necessary to the security of a free State, the right of the people to keep and bear Arms, shall not be infringed

that they did so in the context of a young republic that was still recovering from the aftershocks of the Revolutionary War, had no standing army and relied on citizens to grab their trusty flintlocks from over their fireplaces and muster in the town square if there was a threat to civil order, whether from Indians, rum runners or the British.

People have been interpreting the Constitution to their own political and ideological benefit in the intervening 230 years.  But there also was no question whatsoever that the Founders could not have anticipated and would be horrified that the day would come when there would be 300 million guns carried concealed in shoulder holsters and belts, stowed in car trunks, arrayed on pickup truck rifle racks, and displayed in cabinets and over fireplaces, in a long mature republic that allows  -- and a sick subculture that encourages -- the purchase, possession and carrying of unlimited numbers of those weapons whose sole purpose is to kill and maim.

A consequence of obdurate congressional Republicans is that the gun control fight has shifted to the state level, where Nevada, 17 other states and District of Columbia now have the universal background checks that Congress won't touch, but the reality is that this will do little to stem the gun violence epidemic.

Just ask the grieving families and friends of the Las Vegas victims.