Politix Update: Why Trump Is Beating Clinton In The Right-Wing Echo Chamber 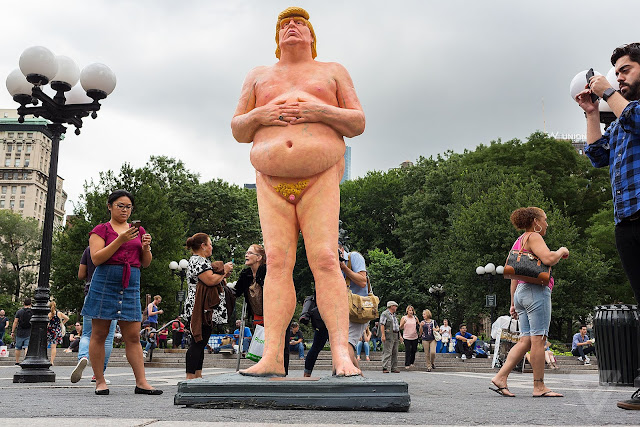 If your world does not extend beyond the confines of Fox News or one of the other rooms in the ghetto known as the right-wing echo chamber, you could be (barely) forgiven if you believe that the race between Donald Trump and Hillary Clinton not only is competitive, but The Donald actually is in the lead with 10 weeks to go.  This is because of two big lies: The polls are all wrong and there is a secret reservoir of Trump voters -- we'll call them Trumpkins -- who are going to magically appear on Election Day to elect the Cheeto Jesus.  Then there are October Surprises and Black Swans, which we'll get to in a moment.

The echo chamber was booming away on Fox the other morning while I was waiting to get my hair cut as one of the network's ubiquitous air hostess blond commentators (who seem to all be the same person, or is that just me?) breathlessly intoned that:

"Donald Trump is turning his campaign around with a new stand on immigration and the latest poll results show him head to head or leading Hillary Clinton.  Meanwhile, Trump has taken the lead in Arizona."

Three little problems with that 10-second sound bite: While Trump may be able to figuratively turn his campaign around, it is literally too late for that to make a difference.  He is head to head with Clinton only in a few outlier polls that are consistently weighted Republican and leads in only one that has a suspect methodology.  Arizona has gone Democratic only once in 68 years (Give 'Em Hell, Harry), but because of Trump's toxicity among minorities and the antipathy some Republicans have for him, it is now trending for Clinton.

Putting aside the crisis of morality sucking at Fox these days, can you imagine the amount of bilge sloshing around in the brains of Trump supporters after watching the network for years, let alone a mere 10 seconds?

All of this is reminiscent of Election Night 2012 when Karl Rove melted down before millions of viewers on Fox over his disbelief that Barack Obama had carried Ohio despite that call by his own network.  And as the night wore on, it became obvious that Rove and his pals had allowed the boom-boom-boom of the echo chamber to fool themselves into believing that Mitt Romney was going to kick the president's Kenyan butt.

Not even a hyper-partisan smacked ass like Rove is likely to make the same mistake this time around. 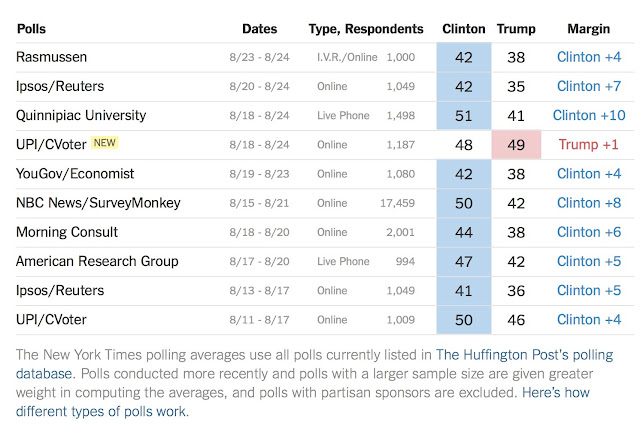 Rove's catharsis is not just because of Clinton's commanding lead in national polls that screen for likely voters and discard other responses -- an average lead of 7.4 percent over Trump at this writing -- but because of where the calendar is.  Historically, and we're going all the way back to that Harry Truman fella here, polls become far more predictive after the conventions and there is no reason to expect this election season is different in that respect despite its inherent strangeness.

In fact, no candidate who was leading at this stage in the race has lost the popular vote, which is why the major polling models all give Clinton such a high likelihood of winning: 85 percent in the FiveThirtyEight polls-only forecast, 90 percent in The New York Times calculator, and 96 percent in the Princeton Election Consortium survey.

One of the strangest aspects of this strange election season is a big reason why these forbidding odds are likely to hold up: Only one candidate is running a campaign in the traditional sense of the word.  That is, doing what it takes to win a national election.

Clinton's headquarters operation in Brooklyn is huge and her field organization so vast that when Arizona began coming into play earlier this month, her operation there grew to 20 field offices with 160 workers practically overnight.  Trump, on the other hand, has no real campaign operation, no infrastructure, an anemic budget, few volunteers and a by-now well publicized proclivity for hiring extremely unvetted problem children like campaign chief executive Steve Bannon, who replaced a man with a hot line to the Kremlin who replaced a potty-mouthed serial brawler.  Bannon for a time was fraudulently registered to vote in Florida, once beat up his wife and is proudly anti-Semitic.

"There is no horse race here," writes Jamelle Bouie in Slate.  "Clinton is far enough ahead, at a late enough stage in the election, that what we have is a horse running by itself, unperturbed but for the faint possibility of a comet hitting the track.  Place your bets accordingly."

But what about those other factors that could undermine or spell defeat for Clinton?

The existence of Trumpkins, known to pollsters as "underground voters," is in the eyes of the beholder. Kellyanne Conway beholds a whole fricking army of them, and suggests that it is on their shoulders that Tump will be carried to victory.

Conway is Trump's new campaign manager and the other half of the package deal that gifted us Steve Bannon.  Conway also happens to be a pollster, which hypothetically should enhance her credibility when it comes to knowing about underground voters.

She leads the army of Trumpkin believers with statements like this one:

"Donald Trump performs consistently better in online polling where a human being is not talking to another human being about what he or she may do in the election.  It's because it's become socially desirable, if you're a college-educated person in the United States of America, to say that you're against Donald Trump."

At a glance, polling data would appear to confirm Conway's view.

Except that like that 10-second Fox News sound bite, Conway's view doesn't stand up to scrutiny.

First, because it's not Trump's support that changes; the movement is almost entirely within Clinton's support.  Slate's Jim Newell points out that if there is any inter-methodology disparity, it's that respondents are more likely to tell a human being that they support Clinton than a robot.

And second, there are not anywhere near enough Trumpkins to make up The Donald's substantial deficit.

But Trump's biggest demographic deficit is among Catholic voters, who traditionally make up the largest bloc of swing voters.

Bottom line: There are far more college-educated voters who are more turned off to Trump than Clinton, and Trump cannot win without their support.  Same with Catholics.

An October Surprise is, as the term implies, a news event that is deliberately timed to influence the outcome of an election.  The term originated in October 1972, some 12 days before the Richard Nixon-George McGovern massacre, when Henry Kissinger, Nixon's national security advisor, announced that "peace is at hand" after four years of negotiations to end the deeply unpopular Vietnam War.

(Wag the Dog, a novel and film about a war started solely to distract attention from a presidential scandal, is a pungent fictional example of an October Surprise.)

As it turned out, peace was not at hand in 1972 and Nixon routed McGovern anyway, but the term October Surprise stuck and has been used with numbing regularity in most presidential elections since.  Problem is, these "surprises" don't amount to much even if true, a good example being the announcement by the Democratic candidate for Maine governor a few days before the 2000 election that George W. Bush had been arrested in that state for drunk driving in 1976.  Bush quickly confirmed that was true and the rest, as they say, was history.

My leading candidates for a 2016 October Surprise are:

* Another WikiLeaks revelation -- possibly aided and abetted by Trump's Russian hacking backers -- about Clinton's email practices, possibly the contents of her so-called "scrubbed" emails.  But if that's the best that Julian Assange and other pro-Trump forces can come up with, the reaction of voters is likely to be another big ho-hum.

* A leak of Trump's federal tax returns, which he has adamantly refused to release.  While damaging in and of themselves because they probably would show that Trump diddled the system and perhaps paid no taxes, this would have little overall impact because he was going to lose badly anyway.

Interestingly if not surprisingly, most October Surprise talk is coming from right-wing websites.

Of all the electoral game changers, a Black Swan Event is both the least likely and the one likely to matter the most should that comet hit the track.

A Black Swan Event is a metaphor that describes an event that comes as a big surprise, has a history-changing effect and is irrationally rationalized after the fact that the event could have been expected.  The term is based on an ancient saying which presumed black swans did not exist but were later discovered in the wild, connoting the idea that a perceived impossibility might later be disproven.

Classic Black Swan Events include World War I, the rise of the Internet, and events such as floods, droughts and epidemics, and my favorite -- the September 11 attacks.

Could an event of this magnitude improbably result in the election of Donald Trump as the 45th president of the United States?  Of course, and I've got a bridge in Brooklyn that I'm interested in selling you.

PHOTOGRAPH BY JAMES BAREHAM/THE VERGE
Posted by Shaun Mullen at 12:03 AM
Email ThisBlogThis!Share to TwitterShare to FacebookShare to Pinterest

Shaun, you really should be syndicated. You deserve a national platform. Why don't you send this post to a syndication outfit as a sample and offer your services for a song for three months or whatever, and they in turn can offer a similar deal to subscribing news outlets. This post, like many others, puts you in the company of the best at NYT and Washpo.