The U.S. Of Cowardice: Still No Accountability For Torture Regime Perps 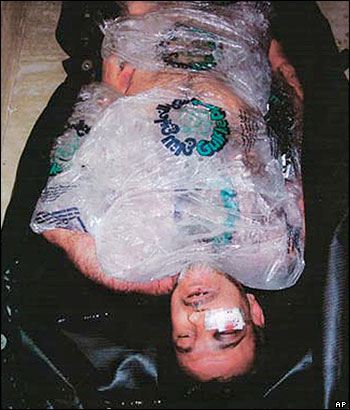 Since 2007, I have written over 30 in-depth blog posts on what I term the Bush Torture Regime.  Underpinning these posts have been a call for accountability for the men who used the 9/11 terror attacks not as a clarion call to affirm all that is right about America, but manipulated the so-called War on Terror into becoming a war on ideals and an excuse to abuse power that drove the nation into the darkest era in its history.

If nothing else, I have learned two things in the years since my first post: The yawning gulf between people who condone torture and those who are repelled by it has not changed, and that accountability not only remains elusive but will remain so.

And so we arrive at another defining moment in the long road since an incurious news media finally began acknowledging something that a number of bloggers, myself included, and civil libertarians had known for years: Despite repeated denials by George W. Bush and his coterie of henchmen, notably Vice President Dick Cheney and Defense Secretary Donald Rumsfeld, they approved of Nazi-like torture techniques that violate the Constitution and Geneva Conventions under the cover of grotesque cover-their-ass legal opinions.

The latest defining moment is how far Diane Feinstein's Senate Intelligence Committee will go in declassifying the results of its investigation --  a massive 6,600 pages with 37,000 footnotes -- into one tentacle of the torture regime octopus: The Central Intelligence Agency's illegal detention and torture of terrorism suspects at secret prisons, its destruction of videotaped evidence, its lying to lawmakers about what happened, its stonewalling about releasing its own internal investigation to Congress, and its break-in of Senate staffers' computers in order to delete incriminating files.  And whether and to what extent the CIA will be permitted to determine what is to be declassified.

* * * * *
If I was not a realist going into my dissection of the Bush Torture Regime, the official reaction to it quickly would have made me one.

That official reaction, such as it was, while Bush was still president had a quality about it somewhere between Alice in Wonderland and George Orwell.  Typical was a statement before a congressional committee by Attorney General Michael Mukasey (remember him?) that led law school prof Jonathan Turley to coin the term Mukasey's Paradox,  which says that:

* * * * *
Then there was the 2008 presidential campaign.  Torture wasn't on the radar screen of most voters to begin with, while the candidates tip-toed around the issue like it was a smoking turd.

This was rich.   Overlooking any mental torture that previous presidents may have suffered at the hands of their First Ladies, John McCain was the first potential president to have been physically tortured by an enemy while serving his country. As he has written in his memoirs, his North Vietnamese jailers withheld medical treatment, forced him to stand for long periods of time, put him in stress positions, beat him and deprived him of sleep during five and a half years of captivity.

All are clearly torture techniques, right?

Not according to Cheney, the acknowledged architect of the torture regime. Not according to his feckless boss.  Not according to the former concierge of the eponymously named Rumsfeld Gulag, a global system that included Guantánamo Bay and secret prisons in foreign countries and aboard U.S. Navy ships. Not according to David Addington, who proudly served as Cheney's dungeon master.
* * * * *
The first defining moment when things could have begun to be set right came with the inauguration of Barack Obama, who in his second act of office signed an executive order directing the CIA to shut what remained of its prison network and ordering the closing of Guantánamo within a year.  (Sorry, good liberal buddies, but Obama's first act was to severely limit access to public records.)  Meanwhile, today there is some dispute about whether that secret prison network is indeed history, while Guantánamo remains open.  And how about that NSA domestic wiretapping program?

As I wrote in the early day's of Obama's first term, I made an uneasy peace with the new president not showing any interest in prosecuting Bush administration perpetrators for their wrongdoing.  Aside from releasing nine memos endorsing torture and other abuses of power from the Bush era Office of Legal Counsel, which Slate commentator Dahlia Lithwick accurately called that administration's "constitutional chop shop," Obama made good on his determination to look ahead and not back and futilely tried to make nice with a Republican opposition that already was sharpening its pitchforks.

In hindsight, I was too easy on the president.

While the argument that prosecuting the torture perps would divide the nation, cause the sky to fall and pretty much scuttle Obama's agenda made some sense in April 2009, it is now April 2014 and the Republicans have been poking away with those pitchfork for five-plus years, pretty much scuttling that agenda anyway.

And so Obama has, in effect, been Bush's secret keeper in asserting that we just need to get over it, or something.

In the meantime, Bush, Cheney and Rumsfeld have kept busy writing memoirs that give new meaning to the term "revisionist history," as opposed to preparing legal defenses against charges that, at the least, they abused the power of their offices.  Although it should be noted that none have taken European vacations.

This is because courts in Europe have issued warrants demanding the arrest of CIA operatives for kidnapping and torturing citizens and residents of their nations, although the warrants have not been executed for diplomatic reasons, while an effort to prosecute Rumsfeld in France for the torture of Guantánamo detainees foundered because no court was willing to take on this particularly hot potato.
* * * * *
This brings us back to the defining moment of the moment and what will happen to that doorstop of a Senate Intelligence Committee report on CIA abuses.

Senator Feinstein, who long has been a CIA lapdog despite her liberal Democratic credentials, thereby assuring from the start that the antipathy over getting to the bottom of the torture regime was a bipartisan effort, has kicked the can down the road in asking the White House to lead the effort to declassify the report, while the White House has given the can another kick in suggesting that it would be okey-dokey if the CIA determined what will be made public.

All of which leads me to suggest that despite some declassification of some stuff we already knew about and commensurate cluck-clucking by the media punditocracy, no heads of consequence will roll.  No jail time.  No moral authority.

Given the number that the 24/7 news world does on our memories, it is easy to forget that the Bush Torture Regime occurred not in Iran, North Korea or even post-Soviet Russia, but in a constitutional republic.  Yes, the public hankers for jobs a whole lot more than an accounting of who was waterboarded when, where and on whose authority.  But we simply have not had the will to hold anyone of consequence accountable, let alone find out what really happened during those darkest days, while the forthcoming whitewash of the CIA report won't change anything at all.

Obama always would have had to go it alone on the issue of accountability and, in fact, would have faced vicious attacks from Republicans and many Democrats, as well, yet the president's roll-over response makes his oft-declared commitment to use government to bring about change something of a joke.  And further confirms us as the United States of Cowardice.

I second that emotion. Wouldn't it be the irony of ironies if the closest we got to a real debate on such issues was the dust-up between the Cheneys and Rand Paul?

I hadn't heard that Mukasey's Paradox thing put so forthrightly. It's obviously a corollary to the Nixon-to-Frost contention: "When the President does it, that means that it's not illegal." Or perhaps, divine right of kings.

M'lady's still madly in love with Obama. And while I surely prefer him to the alternatives that were posed, and I'm enough of a student of realpolitick to know that compromises must sometimes be made, there have definitely been numerous occasions where he erred on the side of political caution over principal. I blamed some of that earlier on unwise counsel from Rahm Emanuel, but he's long gone to sweet home Chicago. And you rightly note that playing ball with the GOP is a long lost cause, as he himself demonstrates now with his pay-equity brickbats. I can only assume that some Emanuel acolyte or someone of similar disposition is warning him away from stands deemed "too progressive" in the run-up to the fall election, as he seeks to offer meager coattails to whomever can use them.

But I harbor no great hopes that, after November, he'll develop fresh spine to wage such battles if public opinion still isn't there yet..

Unknown said...
This comment has been removed by a blog administrator.
10:53 PM