How Power Companies Hoodwinked The Nat'l Park Service & Screwed You 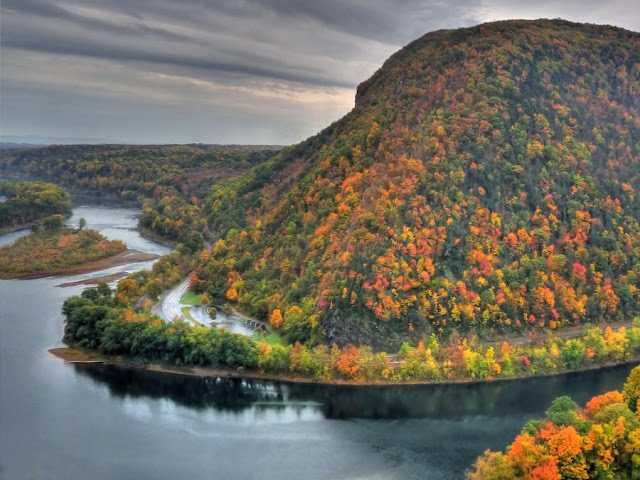 UPDATE: The power companies cited in the article below not only got their way, but the power line was activated this week, the coupe de grâce to a years' long effort to screw ratepayers and the environment with full government acquiescence.

The 70,000-acre Delaware Water Gap National Recreation Area, located on the middle section of the scenic Delaware River in New Jersey and Pennsylvania, is breathtakingly beautiful. Some 75 miles from New York City, it is visited by upwards of three million people a year.  Within its boundaries is a stunning range of flora and fauna, waterfalls, the Appalachian Trail and historic homes and farms.  But if two power companies get their way, the recreation area will be cleaved by high-voltage electric transmission lines strung between looming 197-foot-tall towers over clear cut forest that will dwarf everything in their path and be visible for many miles, despoiling a leafy, river-straddling panorama without peer in the region.  It will be like running a razor blade across the face of a beautiful woman, leaving a hideous scar that will never heal.

A coalition of New Jersey environmental groups has filed suit against the U.S. Park Service in federal District Court in Washington to stop work on the 500-kilovolt Susquehanna-Roseland Power Line, which would run 130 miles from Berwick in Columbia County in Northeastern Pennsylvania to Roseland in Essex County in North Jersey.  The coalition argues that the Park Service unlawfully granted permission for construction of the line on the existing 4.3-mile footprint of a much smaller 230-kilovolt line build in the 1920s, nearly a half century before the recreation area was created.  This, it says, is in violation of the agency's own rules, the Wild and Scenic Rivers Act, and the Environmental Policy Act of 1969.  They note that the Park Service itself acknowledges in its own impact study that the line "would adversely affect protected resources within the park, in some instances irreversibly."

But that is not the half of it.  PPL of Pennsylvania and Public Service Gas & Electric of New Jersey, the power companies that would operate the line, claim it must be built because of an order from PJM, the regional electric grid operator, in order to upgrade existing lines to address power demand issues that were expected to occur in North Jersey by 2012.  But not only have such issues not materialized, demand has dropped because of energy conservation, while four cleaner burning natural-gas powered generating stations will be coming on line in North Jersey in coming years that will provide more than enough electricity.  As it is, electricity for the line would be generated by coal-fired power stations in Western Pennsylvania, Ohio and West Virginia, pollutants from which will blow easterly into New Jersey, among other states.

The real -- if unstated -- reason that PPL and PSE&G are anxious to build the Susquehanna-Roseland Line is that the utilities would be able to pass on the entire cost of the $750 million project to 51 million ratepayers in the PJM region while making a tidy profit.  The electricity available because of the line would be sold by PSE&G to New York City at rates far greater than it charges its New Jersey customers.  When PSE&G completes a long-term agreement to manage the Long Island Power Authority, electricity from the line also would be sold there at inflated rates.

In other words, other than temporary construction jobs, the project will be of no benefit to Pennsylvania and New Jersey residents while despoiling the heart of what is arguably the region's greatest natural resource.

Soil testing and other pre-construction activities already are underway in the recreation area.  Construction isn't scheduled to begin until later in the year. but  would be delayed if the plaintiffs in the lawsuit prevail.

* * * * *
The Delaware Water Gap National Recreation Area is, in part, an outgrowth of a bitter war over the Army Corps of Engineer's plan to dam the Delaware at Tocks Island, which sits upriver about seven miles from the Delaware Water Gap.  The Kittatinny range, the mountains that define the eastern edge of the Pennsylvania Poconos, are worn down as any in the Appalachians.  The ridge line is broken in only one place by a spectacular mile-wide gap where layers of limestone, quartz and shale are laid bare and plunge 1,300 feet from the ridge line at an almost precise 45-degree angle to the river before reappearing in mirror image on the other side.

In signing the legislation creating the 47,500-acre Delaware Water Gap National Recreation Area in 1965, President Johnson declared that "If future generations are to remember us with gratitude rather than contempt, we must leave them more than the miracle of technology.  We must leave them a glimpse of the world as it was in the beginning, not just after we got through with it."  Another 24,500 acres originally designated for the Tocks project were added later.

The recreation area does not compare in size to the millions of acres within the Yellowstone or Yosemite national parks, but unlike those treasures it is a relatively short drive from densely populated cities, a precious swath of open space that has become even more important in the wake of Superstorm Sandy, which devastated another great natural resource -- New Jersey and New York beaches.

Nancy Shukaitis, a Poconos environmental activist and a key player in the defeat of Tocks, considers the recreation area to be "an open air/clean water classroom, a rare place for solace, for human peace within oneself. . . .  The very presence of a transmission line within the DWGNRA speaks to insensitivity and disrespect for the values of our nation's natural National Parks and its visitors."

* * * * *
The war to dam the river at Tocks, creating a vast reservoir that would submerge hundreds of homes and farms, including land farmed by the family of Shukaitis's father-in-law since the 1780s, would be a lightning rod for the nascent American environmental movement.  Before the war whimpered to a conclusion at the end of the 1970s, it destroyed the careers of politicians, was the cause of suicides, arsons and violence, and exposed deep tears in the social fabric of the Poconos.  The war unleashed a bitterness against outsiders and the dam's powerful, politically connected backers that seems just as intense today.

But while the Susquehanna-Roseland Power Line has brought together an eclectic coalition of opponents on the New Jersey side of the river ranging from the Sierra Club to Appalachian Trail groups to the Delaware Riverkeepers, it has elicited barely a hiccup on the Pennsylvania side of the river, and although no conservation or open space group in the Poconos will say so publicly, there seems to be a consensus that what is done is done.  This is because these groups believe they may benefit from a provision in the murky agreement that the utility companies struck with the Park Service to set aside $66 million for a so-called mitigation fund.  The fund would be used, among other things, to purchase open space primarily in Pennsylvania adjacent to or near the recreation area that, the utilities say without a hint of irony, would provide unobstructed "natural views" of surrounding areas.

New Jersey opponents of the power line recognize this agreement for what it is: A bribe in return for groups seemingly dedicated to conservation and preserving open space to look the other way.  The Park Service will be the nominal custodian of these bribe lands, which is something of a joke.  This is because the Park Service struggles to manage the recreation area as it is, and is so overwhelmed that a Park Service official recently asked the U.S. Fish & Wildlife Service if it would consider taking over management of the recreation area lands below the Interstate 80 toll bridge at the Water Gap.

"The public has no information about the lands . . . that will be purchased through the fund," wrote attorneys for the groups suing to block the power line.  "Neither is there any indication or certainty that land acquisitions will be . . . managed in a way that genuinely offsets damages to existing parklands."

The opposition of the Sierra Club to the power line project led one Poconos public official who considers himself to be an environmentalist to rail against the powerful environmental group at a recent board meeting of an open space group.

"I will never give another damned cent to the Sierra Club," the official said, perhaps unaware or not caring that it was the Sierra Club's clout, combined with the good works of Shukaitis and other determined environmentalists on both sides of the river, that defeated the Tocks Island Dam project and helped create a magnificent recreation area that would be scarred forever by the power line he and others tacitly support.

Anonymous said...
This comment has been removed by a blog administrator.
7:19 AM