Why Joe Biden Has Become The Most Influential Vice President In History (Sorry, But Dick Cheney Doesn't Count) 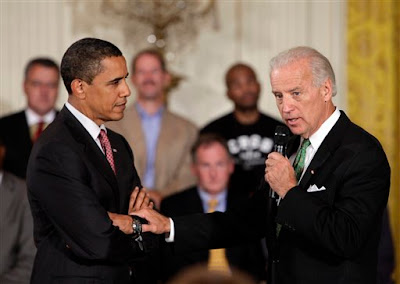 Perhaps one reason Biden's star has risen so high is because he succeeded Cheney, who acted as a de facto president when it suited his imperial self, usurped the roles of national security adviser and secretary of state, was a tireless cheerleader for the use of torture and fear mongering, a scold in accusing anyone who didn't agree with him as being unpatriotic, a key player in going to war against Iraq, and a man who brooked no dissent.  Ever.

By contrast, Biden's chops as a conciliator, honed through 36 years in the Senate, has thrust him into the spotlight at key junctures since Obama was elected, most recently in breaking the fiscal cliff logjam.  Additionally, and perhaps most importantly as history will show, Biden has played a special role as Obama's devil's advocate with the encouragement of a president nearly two decades his junior.

Biden has spoken up when he believed Obama was not making the correct decision, notably in being the sole holdout among the president's inner circle in opposing the daring raid that took out Osama bin Laden, and as the harshest skeptic of the president's Afghanistan strategy, so harsh that some Pentagon bigs labeled him a traitor behind his back.  As history will also show, Obama got lucky with Bin Laden and Biden was right regarding Afghanistan.

There are those who will tell you that Biden was destined for greatness, but I would not be one of them.

I met the future vice president when I was 12 and on my way to junior high school, and he was 17 and entering his senior year at a Roman Catholic boy's school. He was a gangly kid with no apparent social skills and had a stutter. We played beach volleyball together at the Delaware shore for a couple of summers, and his folks and my folks became friends. Delaware, you see, is even smaller than it looks on a map.

Biden went on to the University of Delaware, where he excelled at political science in a department later chaired by the late Jim Soles, who was to attract the future managers of both the 2008 Obama and McCain campaigns to Delaware as undergrads. I followed Joe to Delaware where I excelled at nothing except getting in trouble with the university administration as editor of the student newspaper.

Although I sort of kept up with Biden through my parents' friendship with his, our paths didn't cross again until 1972, my second election as a voter, when I pulled the lever for a Joe who had long left behind the traits of awkward adolescence.

Biden upset a longtime Republican U.S. senator, but within days of the election suffered the tragic deaths of his wife and baby daughter in a traffic accident.  (Years later, he had his own brush with mortality after suffering a potentially fatal brain aneurysm.) Persuaded by Senate Majority Leader Mike Mansfield to not quit, he began the first of six terms in Washington -- at 29 the youngest senator in modern history -- and a tenure in the upper chamber that was to be characterized by hard work, growing foreign relations expertise, a willingness to conciliate, which is to say compromise, and a successful hair weave, as well as a tendency to shoot from the lip.

As my friend Mark Bowden wrote in an Atlantic essay, Biden is in some respects the antithesis of the president he serves.

"No one believes Obama would want, need, or tolerate a Rasputin across the [West Wing] lobby," Bowden wrote. "But whether it has been managing the tricky drawdown of American involvement in Iraq, or implementing the $787 billion Recovery Act, or soothing worries in Eastern Europe over Obama’s revised missile-defense strategy, or helping select two Supreme Court nominees, Biden seems the opposite of a pain in the ass. He has made himself indispensable."

Biden's indispensability was on offer during the many meetings on how to take out Osama bin Laden.  Defense Secretary Robert Gates, like the vice president, also opposed an air or ground operation, but later went along with the high-risk ground mission that Obama advocated.

"Mr. President, my suggestion is: don’t go," Biden said during one Situation Room meeting. "We have to do . . . more things to see if he's [at a compound in Abbottabad, Pakistan]." Biden believed that if the raid failed, Obama could say good-bye to a second term.

Like vice presidents in general, Biden has been subjected to ridicule.

Beyond his verbal blunders, there was The Awl's liveblog (with the sound off) of the Biden-Ryan vice president debate and a hilarious series of articles and images in The Onion to which Biden has reacted to with good humor and then some.  A consequence is that these send-ups have burnished his image as a Joe Sixpack.  (For the record, Biden does not drink alcohol.)

"Look, I ran for president [in 2008]," Biden told Bowden, "because I honest-to-God believed that for the moment, given the cast of characters and the problems of the country, I thought I was clearly the best-equipped to lead the country . . . But here's what I underestimated: I had two elements that I focused on, which made me decide to run. One was American foreign policy, and the other was the middle class and what's happening to them economically. If Hillary were elected or I were elected, and assume I did as good a job as I could possibly get done, it would have taken me four years to do what [Obama] did in four weeks, in terms of changing the perception of the world about the United States of America. Literally. It was overnight. It wasn’t about him. It was about the American people . . . It said, these guys really do mean what they say. All that stuff about the Constitution, and all about equality, I guess it's right."

The biggest reason for Biden's success is revealed in that reflection on 2008: As in the Senate, he has made his own political fortunes secondary and those of the president and country he serves first and foremost.

In his role as a fixer, particularly with regard to the Congress, his position has echos of two other VPs turned POTUS, Johnson and Nixon.

Whether this is a good or a bad thing is up to you.

Personally I prefer Biden to Obama

Yes, but Dick Cheney actually shot a Lawyer. Accident or not, it was a good start.

I've been away for a long, long time. Too long. Am glad I came back in time to catch this.

It is scary how much power he has. This gun control Committee he is in charge of, it is amazing how quickly they were formed. The NRA was recently quoted as saying that when they met with the committee that is was not a meeting in which they would be heard. There was an agenda and that agenda was executed.