40 Years On, The Allmans Are Better Than Ever & That's Saying A Lot 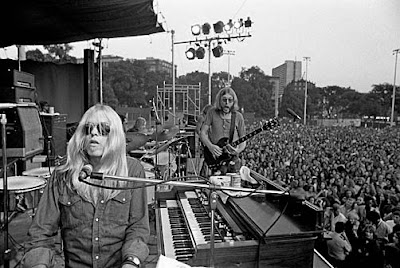 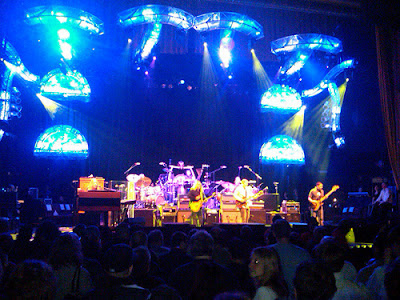 Keeping a rock band going after the death or departure of a key member is a tricky business and many an ensemble has faltered or failed as a result of that.  Examples abound, including Deep Purple, Van Halen and Jefferson Starship.  Cult band Little Feat has survived but never has been as good since the death of leader Lowell George, while the various post-Grateful Dead incarnations have survived and succeeded, but without their late leader Jerry Garcia have not been as good even at their best.  Long story short, George and Garcia were irreplacable.

The Allman Brothers Band is a rare and conspicuous exception.

The band's artistic and commercial breakthrough arrived in 1971 with the release of At Fillmore East, which I consider to be the best live rock album ever.  Then in October of that year Duane Allman, the band's leader and a blues-rock guitarist nopareil, died in a motorcycle accident at age 24.  Bass player Berry Oakley died in another motorcycle accident a year later.  Chuck Leavell and Lamar Williams replaced Allman and Oakley and the band briefly attained even greater commercial success with the hit single "Ramblin' Man," but internal turmoil perhaps inevitably took down the band, which disbanded in 1976, reformed briefly in 1979 and dissolved again in 1982.

In 1989, the band got back together with Duane's brother Gregg still playing keyboards and singing lead locals, Dickey Betts still on guitar and Jai Johnny Johnson and Butch Trucks still on drums.  A series of personnel changes in the late 1990s included the departure of Betts, then early in the 2000s the band finally found stability with the addition of Oteil Burnbridge on bass and Warren Haynes and Derek Trucks, the nephew of Butch Trucks, on guitars.  The band has been going strong ever since and has a huge and devoted multi-generational fan base.

* * * * *
I was fortunate enough to see the Allman Brothers twice before Duane's death.  While I have followed them from afar over the years and have friends who religiously attend multiple shows during the band's now legendary month-long series of concerts at the Beacon Theater in New York City, I had not seen them live in over 40 years.

I expected them to be good and they delivered and then some.  We bailed before their Friday night set, which actually began about 12:20 on Saturday morning and rambled on to 3:30. Our mountain retreat is about an hour away and the woofs needed to be walked and fed.

We were about 20 rows from the immense stage on Saturday night when they kicked off a two-hour set at a more reasonable time -- at least for someone who betrays his age in noting his last Allman's show was when Richard Nixon was president.

From the first note of "Don't Want You No More" -- and I mean the very first note, I was transported back to 1971 and the Spectrum in Philadelphia.  The air was thick with marijuana smoke back then as well, but what was so wonderful is that first note conveyed the same tightness and power that the original Duane Allman-driven band had in spades.

If there is any aspect of this band better than the original, it is the addition in the 1990s of sensational percussionist Marc Quiñones, while Butch Trucks and Johnson -- now calling himself Jaimoe -- have continued drumming up a storm.  The current band's sound is so immense and at times complex that it would be unable to succeed so marvelously without these three.

Jaimoe's Jasssz Band was featured on a side stage on Saturday afternoon before the Allmans set, which was sublime as I spent most of their jazz-blues performance standing in a water park wave pool about 150 feet from the stage.

The journalist in me was curious to know how the Allmans had succeeded after such a long and bumpy ride.

The consensus answer, articulated best by two fiftysomething guys from San Jose, California who had flown in to see the last two shows of the tour, was informative: The band in its current incarnation got it together when the members who drank and drugged to excess went straight or left.  Betts had notorious alcohol and cocaine habits that eventually resulted in him being shown the door, while Gregg Allman also had his nose deep in the bag.

Then there is Warren Haynes, a workaholic musician like Garcia in his earlier years when he also had several side bands, whose presence has had a stabilizing influence.

It is through Warren, I was told, that Gregg finally went straight and began writing songs again.  He has had two lengthy hospitalizations in recent years, the first for a liver transplant (no surprise there), yet was back on stage at Montage looking the worst for wear but with his Hammond B-3 chops as good as ever and "a voice that reflects the vicissitudes of personal losses and victories over the years," as a friend puts it.

How wonderfully reaffirming that the Allman Brothers Band, so much further down the road four decades on, can look back on all those personal loses but are able to revel in their victories, not the least of which has been surviving.

Beautifully said! I just saw them at the Beacon this year andvit certainly exceeded the hype.

During the show, they showed that awesome live photo of the brothers. Any idea who took it, and if its available in print?

The photo was taken at a 1971 show by David Tamoff and distributed by Retna Ltd., which is an independent photo agency associated with photo giant Corbis. It is unlikely there is a poster.