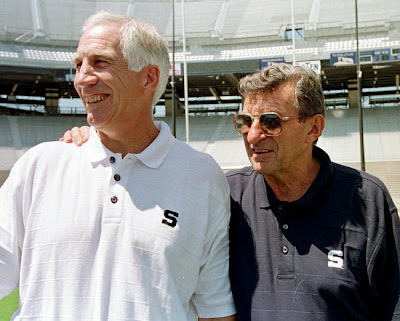 A lot of people believe that late great Penn State football coach Joe Paterno was neither villain nor saint.  I held to that view after the initial revelations that Jerry Sandusky, his longtime defensive coordinator, was a serial pedophile and that the university and possibly Paterno himself had engineered a cover-up in an effort to protect the university's image.  But with the drip, drip, drip of revelations since then and the release today of a damning 267-page report that found Paterno and senior officials failed for more than a decade to take any steps to protect Sandusky's young victims, I have changed my mind.

National championships do not counterbalance sexual abuse, and Paterno's accomplishments and legacy no longer matter to me.  That he, a Roman Catholic as is Sandusky, could not summon the moral strength to do the right thing and instead deliberately and repeated concealed facts about Sandusky's predatory behavior speaks volumes about the man he really was.  A craven coward for whom image was everything  ("Success with honor" was his motto) and sodomized boys were not to be fretted over.

“Our most saddening and sobering finding is the total disregard for the safety and welfare of Sandusky’s child victims,” said Louis J. Freeh, the former federal judge and director of the FBI who oversaw an investigation belatedly ordered by the university's board of trustees. “The most powerful men at Penn State failed to take any steps for 14 years to protect the children who Sandusky victimized."

“In order to avoid the consequences of bad publicity," the most powerful leaders of Penn State University "repeatedly concealed critical facts relating to Sandusky’s child abuse from the authorities, the board of trustees, the Penn State community and the public at large.”

A new and central finding of the Freeh investigation is that Paterno knew as far back as 1998 that there were concerns Sandusky might be behaving inappropriately with children.

Freeh also confirmed a CNN report two weeks ago about an email in which the high-ranking administration officials planned to tell the Pennsylvania Department of Welfare of a 2001 incident involving Sandusky sexually abusing a boy in a football team locker room shower. After having a conversation with Paterno, it was recommended that they offer Sandusky "professional help" and if he cooperated, then they wouldn't report him. .

Campus police pursued a claim by a mother that her son had been molested by Sandusky in a shower at Penn State, but their investigation stalled because of the lack of cooperation from Paterno and high ranking university officials. The report asserts that Paterno not only knew of the investigation, but followed it closely.

Paterno, in denial to the end, wrote in a letter he had prepared but was not published before his January death that whatever the failings in the Sandusky affair — his or the university's — it did not constitute a "football scandal."

The Paterno family, in an attempt to blunt the force of the critical findings, had issued a statement on Tuesday that sought to undermine the fairness of the investigation.  They too are now complicitous in the horror that will forever tarnish the place called Happy Valley.

Sandusky, who clung to the fiction that he and his victims had merely engaged in horseplay, last month was convicted of 45 counts of sexual abuse. The jury found he had attacked young boys at his home, on the Penn State campus and at other locations over many years, while one of his adopted sons came forward and revealed that his father had repeatedly abused him, as well.

The fallout from the report is likely to be substantial.

Penn State would seem to be liable and lawsuits by Sandusky’s victims are likely. The university’s multi-million dollar sports merchandise franchise has taken a hit, while he president of Nike Inc. said today that he has decided to change the name of the Joe Paterno Child Development Center, a child care facility at the company’s headquarters.

Oh, and by the way, it is time to take down the statue of Paterno that sits outside of Beaver Stadium.  Now.
Photograph by Paul Vathis/The Associated Press

Posted by Shaun Mullen at 9:54 AM
Email ThisBlogThis!Share to TwitterShare to FacebookShare to Pinterest

"That he, a Roman Catholic as is Sandusky, could not summon the moral strength to do the right thing and instead deliberately and repeated concealed facts about Sandusky's predatory behavior speaks volumes about the man he really was."

Paterno did do the right thing. Just as Pope Benedict XVI, the top Roman Catholic of them all, had concealed facts about subordinates' predatory behavior, so, to, did Paterno. To believe that Paterno should have revealed the facts about Sandusky indicates that Benedict XVI had erred in similar matters. As such a conclusion conflicts with the doctrine of papal infallibility, it is necessary to deny this conclusion.

There is a reason why there are so many commandments about idolatry in the Ten Commandments. When I was in seminary back in the '80s we learned that idolatry is not about golden statues.

Some people worship money. Penn State worshiped Joe Paterno. Even the main library at the main campus in State College is named after Paterno. Naming the library after JoePa was supposed to be to honor his devotion to the students and to their education.

Like any idol (statues, money, or heroes) once it is exposed as being hollow there is a bitter comedown.

How many things in State College currently named for Paterno and Sandusky will quietly be renamed over the next decade. There will be no mass renaming of everything named Paterno. But as attention dies away reasons will be found eventually to rename things.

No man should be made into an idol and be allowed to stay around forever.