Same-Sex Marriage: The Moral High Ground Gets A Vigorous Workout 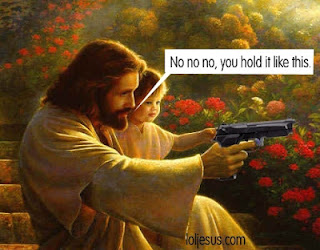 In ethical and political parlance, the moral high ground refers to having the status of being respected for being moral and adhering to and upholding universally recognized standards of justice and goodness.  But alas, there are no commonly accepted universal standards in these divisive times and the result is not unlike a wrench that is ratchetable to any setting that conforms with a person's own standards.

That is why people who believe there should be no restrictions on ownership and use of firearms and are obsessed with threats to their safety, real and imagined, as an unhealthy number of Americas are, believe that they have the moral high ground.  They would take heart in the illustration above of Jesus instructing a young disciple on the proper use of a 9mm Glock pistol.  Oh, and they believe Mahatma Gandhi was a wuss.

On the other hand, people who believe that ownership and use of firearms should be restricted if not banned outright and are convinced that the proliferation of guns and increasingly lax laws on their use are responsible for the epidemic of gun violence, including incidents like that which took the life of Trayvon Martin, believe that they have the moral high ground.  They would be appalled at the Jesus image and revere Gandhi's commitment to nonviolence.

The term moral high ground is being used with indiscriminate abandon by both supporters and opponents of Obama's endorsement of same-sex marriage (while unconscionably adding that he also supports states deciding the issue on their own), while he used the term himself early in his presidency.

In a veiled reference to the Bush-Cheney interregnum and its use of torture, Obama declared shortly after his inauguration that America would now be "willing to observe core standards of conduct not just when it's easy, but also when it's hard. We think that it is precisely our ideals that give us the strength and the moral high ground to be able to effectively deal with the unthinking violence that we see emanating from terrorist organizations around the world."

As it is, supporters of the use of torture to extract information from terrorism suspects --  and these often are people who wave their religious credentials around like glow sticks --  believe that they have the moral high ground.  Never mind that it has been proven that torture is counterproductive when compared to less coercive interrogation techniques.  And one could only hope, these self-righteous supporters would feel extremely uncomfortable when it is pointed out that Jesus guy himself was tortured.

But Obama's hands are not exactly clean.  While his first official act as president was to prohibit the use of torture, the Guantánamo gulag remains open, military tribunals are alive and well, albeit a bit cleaned up from years past, and the CIA and military still operate secret prisons in Afghanistan and God knows where else.

Then there is the matter of medical marijuana, a proven and safe pain reliever for victims of cancer, glaucoma and other diseases.

In this instance, the Obama administration -- as opposed to the president himself, who has said little about the matter since he came off the election trail in 2008 -- has taken the view that federal drugs laws, which still classify marijuana in the same category as heroin and cocaine, trump states like California where voters approved ballot issues decriminalizing its use.  (Irony Alert: As opposed to states where voters approved ballot issues that essentially criminalize same-sex marriage.)

And so in the end, the moral high ground turns out to be more of a slippery slope.