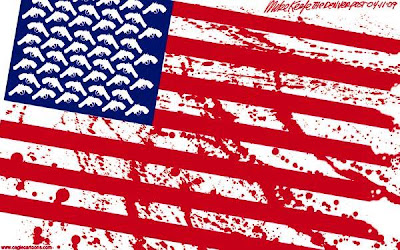 America is a gun-sick country, a place where people can legally possess and in some cases carry weapons specifically designed to kill large numbers of people. Pennsylvania is Philadelphia and Pittsburgh with Alabama in between, as James Carville famously remarked, and the Dixie-like legislature is so in love with guns that they are easier to obtain in the Keystone State than a driver's license or -- get this, fireworks. For good measure, the legislature refuses to allow Philadelphia to enact its own tough gun laws in an effort to end a slaughter that takes four times as many lives on a per capita basis than New York City, which has among the toughest gun laws in the nation.

This state of affairs is largely the result of the pernicious influence the National Rifle Association has on many congressfolk and state legislators. Except for the usual whiners such as gun violence victims, emergency room doctors, the occasional mayor of a liberal city, President Obama and some sane Democrats,  The New York Times editorial board, and most recently the good burghers of Newtown, Connecticut, the NRA would have pretty much run roughshod from sea to shining sea in its jihad to arm America to the teeth.

(And please spare me the false equivalency of the knife attack today at a school in China, where guns are outlawed.)

HR822 -- The National Right-to-Reciprocity Act of 2011, would allow an individual with a concealed-weapons permit in Alabama to travel from New York City to San Diego packing their Glock, which kind of takes the concept of state's rights to stratospheric levels.  .

I had my fill of guns in a place called Vietnam and being shot at a few times while covering civil unrest stateside.

My own view, certainly in the minority, is that each adult American should be allowed no more than one rifle, one shotgun and one handgun each unless they have a collector's permit and keep their multiple weapons under lock and key. Assault weapons would be outlawed, the process of buying a gun, getting a carry concealed permit or a collector's permit would be arduous with all costs being borne by the individual and none by the state, and penalties for running afoul of gun laws would be harsh. Perhaps a few thousand people who are serving long prison terms for smoking a joint could be released to make room for the influx of gun law violators.

HR822 zoomed through the House but had no chance of getting through the Senate, let alone being signed by our cry-baby president.  So the good burghers of New York City, New Jersey and Florida -- jurisdictions that have tough gun laws because of the toll that gun violence has taken -- can breath a little easier when a guy from Alabama walks into their neighborhood 7-Eleven with a bulge in his pants.

No, he's not packing heat, he's just happy to see you.

Unknown said...
This comment has been removed by a blog administrator.
4:38 AM

Actually, I think the knife attack provides an important comparison....because without the power of guns? The wounded Chinese students lived! Gun violence is not just bad people doing bad things, but doing bad murderous things much more effectively because guns make it so very easy.

Unknown said...
This comment has been removed by a blog administrator.
11:34 AM