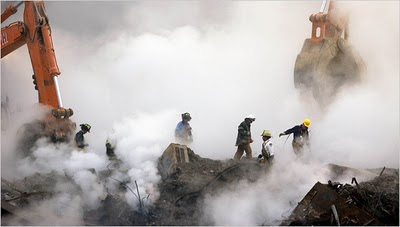 As sheer mean-spiritedness goes, it will be tough to top the successful Republican effort to block Democratic legislation to provide medical care to rescue workers and others who became ill as a result of breathing in toxic fumes, dust and smoke at the site of World Trade Center attack on September 11, 2001.

While the bill, which passed the House in September, could be inserted into the already top-heavy tax-cut bill that may yet be passed before the 111th Congress adjourns, the Republican obstructionism -- based on a stated concern that the $7.4 billion in medical care was too dear -- betrayed an immorality that makes a mockery of claims of fiscal responsibility, and the bill will be deader than a doornail when the 112th Congress convenes in January.

The bill calls for providing $3.2 billion over the next eight years to monitor and treat injuries. New York City would pay 10 percent of those health costs. Another $4.2 billion would be set aside to reopen the September 11th Victim Compensation Fund to provide payments for job and economic losses.

New York Mayor Bloomberg spoke for many of us in chastising Senate Republicans.

"The attacks of 9/11 were attacks on America," he said, "and we have a collective responsibility to care for the heroes, from all 50 states, who answered the call of duty, saved lives and helped our nation recover."

Beyond that is the complicity of the Bush White House, EPA Administrator Christie Todd Whitman and then-Mayor Rudy Giuliani in repeatedly assuring Ground Zero workers that the air was safe to breathe despite ample evidence to the contrary.

The sleazy Giuliani was a known quantity, but Whitman's hypocritical role has never gotten the attention it deserves.

The former New Jersey governor was a rising national Republican star until she was cast out of the GOP temple by the conservative priests in July 2003 for being too moderate. This was well before the full extent of the public-health disaster at Ground Zero became known, as well as how Whitman had willingly let the White House stage manage her pronouncements that workers had nothing to worry about, in several instances rewriting press releases to paint a more upbeat picture.

Whitman initially refused to testify before a House judiciary subcommittee about her post-9/11 statements and when she did disingenuously claimed that those pronouncements were directed at neighborhoods around the WTC and not the workers.