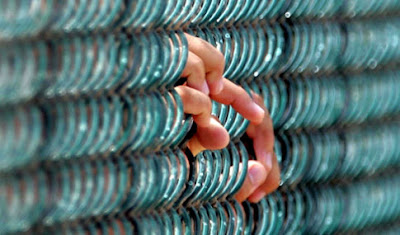 The Bush administration's refusal to follow the rule of law on a wide range of issues is by now monumental, but it nevertheless is shocking that despite three Supreme Court rulings striking down key aspects of its extralegal system for detainees at Guantánamo Bay, it continues to argue that it's all a big misunderstanding.

The pushback is part of a larger strategy for George Bush, a man equal parts arrogant and cowardly: Major decisions, whether they concern Iraq, Afghanistan or the Rumsfeld Gulag, will be dumped in the lap of Barack Obama, who with every passing day seems more likely to be the next president.

When the Supreme Court ruled in June that Guantánamo detainees had a right to challenge their six-plus year detentions in federal court, the justices said that these prisoners should have their cases heard quickly because "the costs of delay can no longer be borne by those who are held in custody."

But although most of the 255 detainees have filed habeas corpus lawsuits and the White House initially said in response to the ruling that Guantánamo would in all likelihood be closed, not one of the cases has been resolved. The administration continues to fight back over a range of issues -- from whether federal courts have jurisdiction (they do) to what evidence constitutes proof that detentions should continue (a good deal more than prosecutors typically have been able to marshall) -- and there is no longer talk of closing the detainee facility at the Navy base in Cuba.

HOLDING HIS NOSE NO LONGER
Yet another military prosecutor at Guantánamo has quit, this one over ethical concerns about his office's failure to turn over exculpatory evidence to attorneys for an Afghan terror suspect scheduled to go to trial in December.

Army Lieutenant Colonel Darrel Vandeveld filed a declaration with a military court explaining his concerns about the case and procedures in the military prosecutor's office.

"My ethical qualms about continuing to serve as a prosecutor relate primarily to the procedures for affording defense counsel discovery. I am highly concerned, to the point that I believe I can no longer serve as a prosecutor at the Commissions, about the slipshod, uncertain 'procedure' for affording defense counsel discovery."

The reservist's departure is the latest blow to the military trials process and a prosecutor's office that has been buffeted by resignations over fairness issues and efforts to cover up the torture of detainees.

Other officials have stated that the leadership of the military commissions is sacrificing principles of justice in a rush to secure convictions. The Army reservist was prosecuting Mohammed Jawad, 24, who is accused of tossing a grenade into a military jeep at a bazaar in Kabul in 2002, injuring two U.S. troops and their Afghan interpreter.

The Jawad case has been a flash point for much that is wrong atGuantánamo.

Brigadier General Thomas W. Hartmann, an Air Force reservist and corporate lawyer, has been such a relentless and aggressive advocate for the military commission system despite his supposedly neutral role and so shamelessly pro-prosecution that a military judge barred him from acting as a legal advisor to the court on the Jawad case.

And Lieutenant Colonel Diane Zierhoffer, an Army psychologist who ordered the torture of Jawad, has invoked her right not to incriminate herself and refused to testify at a hearing on whether charges against him should be dismissed.

FAILING UPWARD
Brigadier General Hartmann has been so bad at his job that he has been promoted to the post of director of operations for all Guantánamo show trials.

The new job takes Hartmann away from direct supervision of prosecutions.

PSYCHOLOGISTS VOTE 'NO' ON TORTURE

Members of the American Psychological Association have voted by a large margin to pass a referendum banning their participation in torture at illegal detention facilities.

In a letter to President Bush, the association advised him that:

"The roles of psychologists at such sites would now be limited to working directly for the people being detained or for an independent third party working to protect human rights, or to providing treatment to military personnel. The new policy was voted on by APA members and is in the process of being implemented.

"For the past 20 years, APA policy has unequivocally condemned torture and cruel, inhuman or degrading treatment or punishment, which can arise from interrogation procedures or conditions of confinement. APA's previous policies had expressed grave concerns about settings where people are deprived of human rights and had offered support to psychologists who refused to work in such settings."

ANOTHER SMALL VICTORY
A federal appeals court has ordered the government to release 21 photographs depicting the abuse of detainees by U.S. soldiers in Iraq and Afghanistan.

The ACLU, which had sued the government, said the order puts in historical context the U.S.'s "strained relationship" with the Geneva Conventions.

The government had disingenuously argued that releasing the photos would be an "unwarranted invasion of privacy" of the detainees.

'THE UNMENTIONABLE QUESTION'
Jane Mayer, author of The Dark Side: The Inside Story on How The War on Terror Turned into a War on American Ideals, recently participated in a discussion at the TPMCafe Book Club on her bestselling book.

Mayer kicks things off by asking:

"So--on a morning when accountability seems to have evaporated in the financial world - I'd like to know what we do about accountability at the top of our government for authorizing the abuse- and in some cases the killing of U.S.-held prisoners, all of which were criminal until the day before 9/11. Any thoughts?"

There were many. More here.

And for those who haven't had the opportunity to read The Dark Side, it was excerpted in 25 parts at Kiko's House in July and August.

I WAS WONDERING THE SAME THING
Blogger Alan Jacobs, who recently finished The Dark Side, writes at The American Scene that:

"[T]here's no question that Mayer has an agenda, and that that agenda leads her to structure the narrative in ways that point rather crudely to Pretty Good Guys (e.g., Jack Goldsmith) and Terrible Horrible No Good Very Bad Guys (Dick Cheney and David Addington). And she occasionally relies on unnamed sources. But if you take all of that away, and see the book only as an anthology of information in the public record — newspaper articles, interviews with named figures, books by former Bush administration officials, government documents, and so on — it's still a convincing demonstration of how certain high-ranking leaders ignored international law and overturned decades (even centuries) of American practices towards enemy combatants.

"Yet I have seen almost no response to this book in the conservative press. What’s up with that? The Dark Side has been reviewed in most major newspapers and magazines, but not from any of the conservative organs I’ve seen. Have I missed something? And if not, what are we to make of this silence? Do conservatives think Mayer's book is so bad that it’s unworthy of response? (If so, they’re wrong.) Are they just trying to avoid acknowledging uncomfortable truths, and would prefer not to think about what the Bush administration has done in prosecuting its war on terror? Or — perhaps the most interesting possibility — do they agree that Mayer has accurately described the administration’s actions but simply judge those actions very differently, as necessary and even commendable responses to the Islamist threat?"

The answer, Alan, is that they just want the whole subject to go away, especially when they're being all worshippy in church on Sunday mornings.

My own take is here.