R&R Festival: 'You Keep Pulling Me Back' 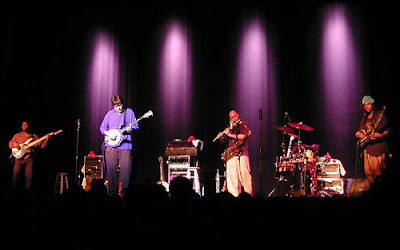 BELA FLECK & THE FLECKTONES
It is after midnight and the 10th annual Rhythm & Roots Festival has just come to a gloriously cacophonous end with a rollicking jam starring a Who’s Who of Cajun, zydeco and Creole musicians led by Steve Riley, as well as other notables including country great Marty Stewart.

On the way to the parking lot, we pass a man with way too much energy for the hour who is talking passionately into a cell phone.

"I thought I should break away from you, Baby," the man is pleading, "But I love you so much that you keep pulling me back."

So it is with the Rhythm & Roots Festival. Because try as we might to be somewhere else on Labor Day weekend, our love for this grand celebration of American roots music is like a religious pilgrimage and we keep getting pulled back.

Let's get some stuff out of the way before I share some highlights of this year's festival: The 2008 edition of the R&R will be held August 29-31 at its one and only venue -- near , which is hard by the lovely seacoast. That enables the DF&C and I to do three of the things we most love in life: walk on a beach, swim in an ocean and listen and dance to great music.

I have been to a zillion festivals over four decades and none are better organized than the R&R, have sound so extraordinary, nicer surroundings, better food, drink and crafts, more commodious camping facilities and friendly staff, and are more accomodating to listener and dancer.

Then there are the dance classes and instrument and mask making workshops, as well as family-friendly activities for the young critters. The crowds top out at about 10,000 when the weather gods are smiling, which they certainly were this year, and it is not unusual to see three generations of the same family down at the main stage or strolling through the crowd.

The musicians and styles pretty much run the gamut, and the good feelings have led the DF&C and I to speculate that Ninigret must sit on an old Indian ceremonial ground, which may or may not be the case, but certainly makes sense.

There were some 25 bands in all over the weekend past, so these are just some of the highlights:


Natalie MacMaster was playing her first gig with her new band and first since recently becoming a mother for the second time. This master fiddler from 's put on a great show, but her traditional repertoire was not the best way to close out the opening evening and suffered when compared to the hard playing bands that immediately preceded her – Paul Cebar & The Milwaukeeans and Racines. I for one wanted to go out with a bang and not a fiddle and bagpipe caress.

Paul Cebar and his ensemble, touring behind their first album in over a decade, played an eclectic stew of Latin, funk, zydeco and soul that got and kept the crowd on their feet, while Racines (French for "roots") blew us right off our feet. Led by Steve Riley of Mamou Playboys fame, this Acadian super group ran the gamut from zydeco, Creole, Cajun, swamp pop and blues.


Then there were the Creole Cowboys. Led by Jeffrey Broussard of Zydeco Force fame, they instilled a power into their Creole and zydeco repertoire that seemed unstoppable and untoppable. Until Paul Cebar’s encore performance, which in turn was followed by four bands that seemed to outdo each other in exemplifying the breadth of roots .

First came those men in the libre masks, Los Straitjackets, fronted on their current tour by the outrageous Big Sandy, who adds a madcap urgency to their Latino-inflected covers of R&B classics.

Next came that Steve Riley with his original Mamou Playboys, who have to be considered the Cajun standard bearers on the circuit today, followed by the show stopping Donna the , a longtime R&R Festival favorite who brought the house down with its Appalachian-inflected country rock jams. I first heard "The Herd" about 10 years ago and liked them a lot. But their growth has been most impressive and the sounds deftly woven by multi-instrumentalist Tara Nevins are to die for.

Susan Tedeschi is a great singer and guitarist, and she closed out the evening with a romp, alternately up and down tempo, through blues, rock and R&B.


Steve Riley & the Mamou Playboys started out the evening portion of the final day with an encore performance that included members of their extended musical family, which is to say musicians from other festival bands, and indeed there was a tremendous amount of stage sharing over the weekend. (Example: Tara Nevins had stood in on washboard with the Playboys the previous evening while accordian great Jeffrey Broussard was all over the place.)

The Playboys were followed by Marty Stewart & His Fabulous Superlatives. Stewart has won a passel of Grammys for his own country albums, but it is when he pays homage to greats like Lester Flatt and Johnnie Cash that my typical disinterest in musicians of the persuasion is suspended.

There may be no more telling example at the R&R Festival of the fact that American roots music is all part of one big tree than Stewart and Bela Fleck, who with his Flecktones finished the evening with a rollicking clinic on jazz, funk, bluegrass and world music.

Fleck is a bluegrass banjo player at heart and grew up, musically speaking, with mandolin master Stewart. Their careers have taken them in rather different directions that nevertheless end up at the same place -- under that big tree: Stewart was inducted into the Grand Old Opry en route to a slew of No. 1 Americana hits and Fleck and the Flecktones to nominations in more Grammy categories than any other artist or band in the history of the award. They won the 2006 Grammy for Best Contemporary Jazz Album of the Year, which shows to go you how difficult this band is to categorize as well as how silly musical pigeonholing can be.

It had been about three years since we last saw the Flecktones and that was at one of those sit-down venues where an usher taps you on the shoulder if you try move your body. As sensational as they were then, this gang has kept growing, and bass player Victor Wooten in particular is really breaking out. There wasn’t a person in the crowd who wasn’t moving their body by the time the Flecktones had closed out the 2007 edition of the R&R.

I have been around the planet long enough to appreciate that long before there was MTV, satellite radio and the iPod, there was an aspect of selflessness in music that seems as archaic as the eight-track tape in the detachedness of our high-tech age.

Performers always have been ego driven, of course, but there is an element of sharing in the musicianship of the very best of them -- as in sharing with each other and in turn sharing with their audiences beneath that big tree -- that is on glorious display at the R&R year in and year out. That is ever so special.

Will we be back for the 2008 festival? You can bet your washboard on it.

Exceptionally well said; you put me there. Pass the sunscreen.

Coupla things: Regarding Natalie, tho I've only heard her on David Dye, your comment about fest-ending energy reminded me that B.B. King once told me he deliberately builds two peaks into his shows, the earlier one very high and the 2nd less so, then tapers to a calmative ending, so as not to send his audiences out to their cars all wound up and freaky on the roads. For what it's worth.

Regarding fest organization, it sounds very beguiling to be on the seashore while at a fabulous music fest.

NOLA's Jazz & Heritage Fest can't compete there (it's held at a thoroughbred track). But it is the best organized (every show starts precisely on time from 10 simultaneously running stages over 6 days on two successive weekends), is the most eclectic (modern jazz, Dixieland jazz, gospel, r&b, blues, hip-hop/rap, funk, country, cajun, zydeco, folk, klezmer, African, Caribbean) and has the best food (you gonna argue wid me 'bout Nawlins' creole cookery? Here, have yerself an alligator po' boy and crawfish etouffe!) of any fest on the planet. And the sound from each stage is not only typically pristine when you're in front of it, but also -- if you pick the right spots to stand on the fairgrounds -- blends miraculously with that from several other stages; that's the cliched gumbo everybody talks about.

One more thing you oughta know if you don't: Steve Riley, when he's at the NOLA fest (and he almost invariably is) makes a point of reorganizing another pickup supergroup, L'il Band of Gold, that is perhaps the finest swamp pop/cajun outfit performing today: As the Austin Chronicle described them: The band consists of accordionist Steve Riley of the Mamou Playboys, guitarist C.C. Adcock, veteran swamp pop drummer Warren Storm, Richard Comeaux of country act River Road, File's pianist David Egan, and bassist Dave Ranson, best known for his work with John Hiatt and Sonny Landreth. A horn section that includes David Greeley of the Mamou Playboys and Pat Breaux of Beausoleil augments this core group. Together they've concocted a mixture of energetic romps and soulful ballads that evokes the sound of Excello Records circa 1959.