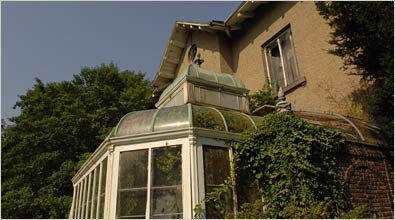 For more than half a century, Marjorie Brickman Kern has lived in the main mansion at the Point, the grand estate on Long Island's Gold Coast that is believed by some to have inspired the fictional West Egg home of "The Great Gatsby."

The Point sits atop a 20-foot cliff in the village of Kings Point overlooking Long Island Sound, where sailboats glide through a panorama of bridges and lighthouses against the backdrop of the Connecticut shore and the Manhattan skyline.

These days, Mrs. Kern, an 81-year-old widow, lives alone amid floors rotted in places and some paneless windows. Parts of the grounds — which include a vineyard, a lily pond, a clay tennis court, a horse paddock, a squash court, a gym, a greenhouse and formal gardens — are neglected and overgrown.

If there were no Disney, would girls still spend their lives looking for Prince Charming?

With the new government stats on household income, the Bush Administration is likely take credit for a whopping 0.7% "surge" in families above the poverty line. That's a whole 500,000 individuals, after 6 straight years of increasing poverty. Way to go Bu$hCo! But . . . uh. . . before you start patting yourselves on the back . . .

the number of people who've lost their health insurance is a sobering statistic that could bear some additional scrutiny. You see, 2.2 million fewer people are covered than a year ago. And how did that happen? Well many lost their employer sponsored coverage. Others lost their access to government sponsored programs.

In economic terms, this is a double whammy. Not only does one's aggregate compensation decrease by double the value of the insurance (the pre-tax cost plus the post-tax expense of covering oneself), but the quality of coverage also declines. In real terms, this might work out to as much $8,000 to $10,000 dollars a year per individual. And I'm willing to bet that, for a sizable chunk of our newly uninsured, 8K - 10K is the difference between being above the poverty line and being below it. So Bu$hCo, say bye-bye too your 500K uptick in prosperity.

The main problem with the Republican Party: it's just too gay.

For his continued cooperation with federal prosecutors, Jack Abramoff may get another delay in his bribery case.

Lawyers for the government and the disgraced former GOP superlobbyist are asking to postpone for another three months sentencing Abramoff for fraud, tax evasion and conspiracy to corrupt public officials, to which he pleaded guilty more than 18 months ago.

During that time, Abramoff is expected to continue helping the government's investigators "for the foreseeable future," the two groups said in their request to U.S. District Court Judge Ellen Huvelle. The delay would be the fourth so far in Abramoff's bribery case and would push his sentencing date at least into December.

-- JUSTIN ROOD
It's the end of time, at least as far as AT&T is concerned.

The brief note in customers' bills hardly does justice to the momentousness of the decision. "Service withdrawal," it blandly declares. "Effective September 2007, Time of Day information service will be discontinued."

What that means is that people throughout Southern California will no longer be able to call 853-1212 to hear a woman's recorded voice state that "at the tone, Pacific Daylight Time will be . . ." with the recording automatically updating at 10-second intervals.

"Times change," said John Britton, an AT&T spokesman. "In today's world, there are just too many other ways to get this information. You can look at your cellphone or your computer. You no longer have to pick up the telephone."

Indeed, time already has stopped in 48 other states, he said. and are the two remaining holdouts.

Of course, seeming to be gay is not the same as actually being gay, despite what the police department believes. In fact, the more one looks at the evidence that Craig seems to be gay, the more one can see that it is really just evidence of being conservative. There are many attributes of conservatism that seem really gay and unfortunately the more we deny that we are gay, the gayer we seem. This incident should put a chill in every conservative who has a "wide stance" or belongs to a barbershop quartet.

It can be a world of untold secrets, codes and signals as invitations to partake. Like foot-tapping: Who knew?

Let us peer in, shall we?

Ted Haggard’s Daddy Dobson-approved Spiritual De-Gaying Oversight Squad has released a statement in light of the disgraced pastor, former male escort client and meth purchaser’s outrageous fundraising plea the lifestyle to which he had been accustomed while heading up . (Ted promised the suckers his followers that they would be “rewarded in heaven” for supporting him.)

Ted had planned to move into a halfway house, the , where he would “minister to men” there while working toward his degree in counseling, but alas, that invitation was just withdrawn.

The restoration team – godly, clean men who inserted themselves into the life of the fallen pastor, were not pleased.

I want you to close your eyes and imagine you are standing in the middle of Church Square of the blogosphere, at the junction of Piety Avenue and Judgement Boulevard.

Still your mind for a moment. Take a deep breath and exhale completely, and now, listen.

Did you hear it?

The sound of utter, embarrassed silence.


Photograph by Robert Stolank for The New York Times