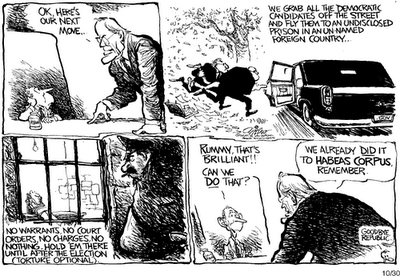 How low can they go?

Leave it to a desperate Rick Santorum, the right wingnut Republican from Pennsylvania who is looking at the ass end of an ignominious political career, to scrape bottom.

Santorum accuses his Democratic opponent, State Auditor Bob Casey, of "abetting terrorism and genocide" by investing state pension fund money in companies with ties to terrorist organizations and states that engage in genocide. The proof? There is none.

I just hope and pray that the remaining seven days go quickly.

I've kept blogging on the mid-term election to minimum because there isn't much that I can say that other bloggers aren't already saying ad nauseum. Of the 300 posts that I've put up at Kiko's House over the past six weeks, only 20 or so have been politics-related, and several of them were because of the Mark Foley Scandal.

There's another reason, as well:

While I welcome the apparent end of the Republican hegemony on Capitol Hill and won't miss flaming idiots like Santorum, I don't see the Democrats as being a big improvement.

When the Republicans swept to power after the 1994 mid-term election, the differences between the parties were more apparent. Twelve years later, there aren't a whole lot of differences once you scratch the surface, and both parties are thoroughly in the thrall of monied special-interest groups.

The Republicans stayed relentlessly on message over the past 12 years while robbing the middle class, feathering their own nests (thanks, Jack Abramoff), giving conservatism a bad name and providing The Decider with a blank check to wage war abroad and abrogate civil liberties at home.

The fractious Democrats remain off message, and that's okay to a point. The party would be unrecognizeable if it spoke with one voice.

But the Democrats were less the loyal opposition over the last six years of turmoil than cowed defeatists. That is until the stench emanating from the GOP became so overwhelming and the catastrophe that is the Iraq war became so unmistakable that they realized that it was safe to climb out from under their moss-covered rocks.

If the Democrats have succeeded in taking power after the last votes are tailed in the wee hours of next Wednesday morning, it will not be because they earned it as much as because the Republicans squandered it.

And by the way, if you're registed, vote early and often. Don't go all cynical like I am and decide to stay home.

Vote, dammit! My bad attytood aside, I know that I will.

Posted by Shaun Mullen at 3:29 AM
Email ThisBlogThis!Share to TwitterShare to FacebookShare to Pinterest