That Big Test Is Finally Here: The Certain Uncertainties Of A Post-Truth America

This just in: No matter what Special Counsel Robert Mueller has concluded in his final report on the Russia scandal investigation, a large minority of voters won't believe a word of it.  That is pretty much all you really need to know as we lurch into the future of a Post-Truth America in which crap, corruption and chaos are among the very few certain uncertainties while the impeachment of a deeply corrupt and obviously insane president whose approval ratings should be far underwater but have remained steady is a no-brainer but deeply problematic.

That big test -- you know, the one in which democracy withstands Trump's unprecedented assault on all we hold dear or fails miserably -- is finally at hand.

The 675-day Russia investigation demonstrated beyond a prosecutorial shadow of a doubt that Trump was desperately seeking to do business in Russia even as he repeatedly claimed he had no dealings there whatsoever, and knowingly surrounded himself with crooks who repeatedly lied to investigators about anything and everything, including over 100 meetings with Russians, many of them cut-outs who were doing Vladimir Putin's bidding. 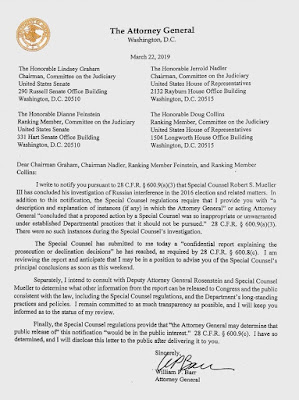 Six former associates and advisers to Trump have been indicted or entered guilty pleas, including his 2016 campaign chairman and longtime lawyer-fixer, who will begin prison terms in the coming weeks.  Literally dozens of people associated with Trump's business dealings, campaign and presidency have been tarnished as the enormous breadth and depth of his criminality, which extends well beyond the special counsel's purview, has been laid bare.

But there were no further indictments -- let alone one with Individual No. 1's name on it -- from Mueller (an important distinction) on top of the staggering 37 already handed up before the Friday evening release of Mueller's final report, and in the final analysis the report may not be the bombshell I and others have anticipated, especially after it is spun to shreds by a punditocracy that has been agonizingly slow to recognize the enormity of the scandal.  Watergate, the Teapot Dome and Soviet theft of atomic bomb secrets are mere also rans when compared to this unprecedented assault on the bedrock of American democracy.

Trump has proven himself to lack even a single quality of a competent, let alone great, leader, while having shown an uncanny knack for encouraging Russian election interference.   ("Russia, if you're listening, I hope you're able to find the 30,000 emails that are missing," he infamously declared mid-campaign in reference to Hillary Clinton's emails, and by gosh by golly the Russians began doing just that a few hours later.)

But even if Mueller's report has proof that the campaign and Trump himself conspired with Russia to get him elected but could not clear the very high bar to prove criminal conspiracy, it will be seen through the hallucinogenic prism of Post-Truth America by that large minority of followers as a vindication because of the absence of new indictments and further confirmation for the president's congressional sycophancy that the "true" scandal was an attempted deep-state coup d'état engineered by Mueller and the FBI to avenge Hillary Clinton's defeat. 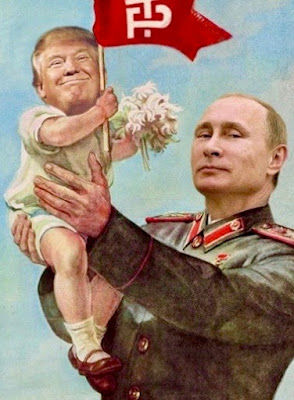 Never mind that nearly everything Trump has touched for the last decade stinks on ice.

Beyond multiple Democratic-led House investigations, there are a dozen or so ongoing criminal investigations for a smorgasbord of evil-doing ranging from a family charitable foundation that was his personal piggybank to campaign-finance crimes to cover up hush-money payments to women with whom he had affairs.  The Evangelical so-called Christians in that large minority have forgiven Trump, so why can't we?

The Mueller report was not going to be a game-changer.  Not in Post-Truth America.  So sorry.

I will admit to feeling gut-punched like I did the day after Trump was"elected,"  but the rending of garments by libruls over the lack of 11th hour indictments and the ending-with-a-whimper-not-a-bang analogizing are misplaced.  No matter what the report says, it will not be exculpatory and will be a reckoning for Trump.  Mueller may be done, but prosecutors in New York and Washington and some pretty shrewd House committee chairmen are just getting started.

Yet . . . Yet what all of this may add up to is that there is a possibility the president who ushered in the era of Post-Truth America while lowering the standards of decency to subterranean levels and thumbing his nose at the rule of law while selling out America's interests to its greatest enemy will never see the inside of a prison cell.

May not even be impeached.

And even when the full weight of the Russia and other scandals crash down on him -- which they will despite all the certain uncertainties -- he will cut a deal with feckless Democrats allowing him to escape Washington for his gilded Fifth Avenue penthouse with nary a scratch.  Who cares what the history books will say.  Our flag was still there.

In the meantime, that big test will begin as early as Sunday when Attorney General William Barr, to whom Mueller sent his report, briefs congressional leaders on its conclusions and, more importantly to the future of American democracy, will then have to decide whether to publicly release it amidst fevered Democratic calls for transparency in the face of yet another certain uncertainty -- that the White House is locked, loaded and ready to wage an epic battle to forestall the collapse of Trump's presidency.

Click HERE for a comprehensive timeline of the Russia scandal
and related developments.
Posted by Shaun Mullen at 7:38 AM
Email ThisBlogThis!Share to TwitterShare to FacebookShare to Pinterest

Trump has skated his whole life and I agree that it might yet happen again. What I don't want is for him to be able to use the "no more indictments" as his next campaign slogan. I know I can't take four more years of this hollow person. Thanks for following this to the end, Shaun.

Dan Leo said...
This comment has been removed by the author.
3:00 PM

Thanks, Shaun. After all this time waiting for the report, there does seem to be an air of anti-climax at the moment. It's as if we're all sitting in a waiting room, waiting...

Shaun.Thanks. This was a great column.
The Game of Thrones digs in.

Mueller was also running or at least contributing to a federal counter-intelligence investigation. You would not necessarily expect that to yield indictments, but Mueller's findings in that regard could tar Trump as a traitor in the eyes of most Americans, depending of course on how much will be made public. But even if Barr redacts much of that part, the are other ways the info could get out. So even without indictments, the contents of the Mueller report could doom Trump.

A timely addendum (published in 1999) on why the Justice Department has said a sitting president cannot be indicted:

“A necessity to defend a criminal trial and to attend court in connection with it . . . would interfere with the President’s unique official duties, most of which cannot be performed by anyone else. It might be suggested that the same is true with the defense of impeachment proceedings; but this is a risk expressly contemplated by the Constitution, and is a necessary incident of the impeachment process. The Constitutional Convention was aware of this problem but rejected a proposal that the President should be suspended upon impeachment by the House until acquitted by the Senate. . . .

“To wound him by a criminal proceeding is to hamstring the operation of the whole governmental apparatus, both in foreign and domestic affairs. It is not to be forgotten that the modern Presidency, under whatever party, has had to assume a leadership role undreamed of in the eighteenth and early nineteenth centuries.”

"To wound him by a criminal proceeding is to hamstring the operation of the whole governmental apparatus, both in foreign and domestic affairs. It is not to be forgotten that the modern Presidency, under whatever party, has had to assume a leadership role undreamed of in the eighteenth and early nineteenth centuries.”

Thanks for the addendum. I believe none of us in the 21st century realized how hamstrung a government could be under an incompetent president like the one we have right now. Also, I wonder if there is any way to bring balance back into our government so the president doesn't have such an oversized role.

Yes, the Justice Department policy seems like it is from another age, which given the criminality of Trump and his presidency it most certainly is.

I do not know when or whether the gross imbalance will be addressed, let alone corrected.