The Roof Just Fell In On The President Of The United States. What Happens Now? 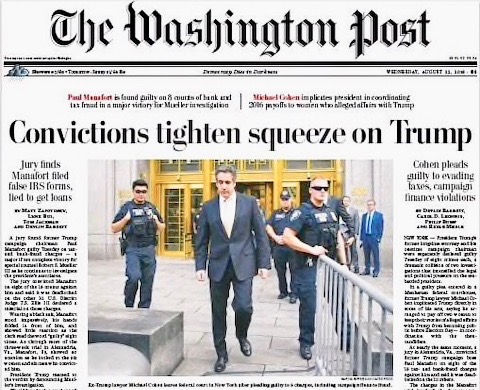 Five associates of the president of the United States have either pleaded guilty to or been convicted of crimes since he took office, further cementing (as in concrete shoes) that this con man and crook has long surrounded himself with other con men and crooks.

Under normal circumstances, the president would be facing impeachment and removal from office.

But as we well know, nothing is "normal" about a president that bottom crawls in an alternate universe where "truth isn't truth," the president's "best people" are trash while true patriots are demonized and punished, a legal and fastidiously conducted investigation into the president's high crimes and misdemeanors is a "witch hunt," and Congress shirks its constitutional responsibility to be a check on  the president when not away from the swamp on one of its interminable recesses.

And so even if the figurative roof has fallen in on the Donald Trump's reality show of a presidency and it is now beyond obvious that his 2016 campaign was a get-rich vehicle for those con men and crooks, the president himself won't be going anywhere for the foreseeable future despite the mortal blow he has taken.

Nor will America "wake up."

If there was anything surprising about the dramatic events of Tuesday afternoon it is how unsurprising they were in the context of a presidency where aberrance is the norm and we wake up each day wondering if it's safe to get out of bed.

In the space of an hour, there was the riveting split-screen theater of Paul Manafort, Trump's former campaign chairman, being convicted of multiple crimes that could send him to prison for the rest of his life despite Trump's incessant jury tampering by Tweet, and Michael Cohen, Trump's former lawyer and fixer, pleading guilty to felonies in which the president as candidate was directly involved.

The canary is Michael Flynn, Trump's short-lived national security advisor, who apparently still has so much dirt to share on Trump and his campaign that Mueller has again asked that his sentencing hearing be postponed.

As it is, the sworn testimony of Cohen regarding hush payments probably will not have any legal consequences for Trump while he is in office, while the Paul Manafort convictions are based on financial crimes committed before he joined the Trump campaign.

But that misses the larger point.   There is now a full-blown constitutional crisis the likes of which have not been seen since Watergate (and those of us who lived through Watergate now know that it was a third-rate scandal compared to what we are living through today).  Yet the immediate remedies for the crisis Trump has brought on America are political and not criminal, while the very institutions that should step in and hasten his removal are as bought as the strumpets he had Cohen pay for their silence.

With the presidential ship taking on ever more water, what happens next?


Trump lovers continue to love him and Trump haters hate him even more, if possible.

Congressional Republicans babble pious platitudes while sitting on their hands.

Rudy Giuliani and the Fox News sycophancy declare that the president did no wrong.

It becomes more dangerous than ever to be friends with Trump and some abandon him.

Trump fires Jeff Sessions and redoubles his efforts to shut down the Mueller investigation.

The Omarosa Manigault Newman Revenge Tour sells a lot of books and claims a lot of victims.

For the time being, congressional Democrats curb their impeachment enthusiasm.

Democrats campaign for the midterms on saving Obamacare and exiling Trump.

A blue wave on Election Day sweeps Democrats back into firm control of the House.

That is, if Russians doesn't take advantage of Trump's blatant disinterest in stopping them.

Republicans search for their souls in vain and ponder how Trump destroyed their party.

The Supreme Court lurches to the farthest right, further imperiling our liberties.

Cohen spills the beans regarding what Trump knew about Russian election interference.

Manafort ponders whether to cut a deal with prosecutors or hold out for a pardon.

Impeachment proceedings commence in January after the new Congress is sworn in.

A revivified House Judiciary Committee sends articles of impeachment to the full House.

The full House, by the narrowest of  margins, sends the articles to the Senate for trial.

And for only the third time in history, an impeachment trial commences in the Senate.

By all appearances, Donald Trump is floundering now that the truth is his greatest adversary.  Insiders say he is terrified as 40 years of deceit comes home to torment him and the system he has repeatedly derided bit him with such a vengeance on Terrible Tuesday.  The karmic payback is a thing of beauty.  After all, Crooked Hillary was supposed to go to jail, but now his closest adviser and campaign manager will be.

And what, you might ask, could possibly go wrong?

Click HERE for a comprehensive timeline of the Russia scandal
and related developments.
Posted by Shaun Mullen at 7:21 PM
Email ThisBlogThis!Share to TwitterShare to FacebookShare to Pinterest