Thoreau Was Right: The Bluebird Carries The Sky On It's Back 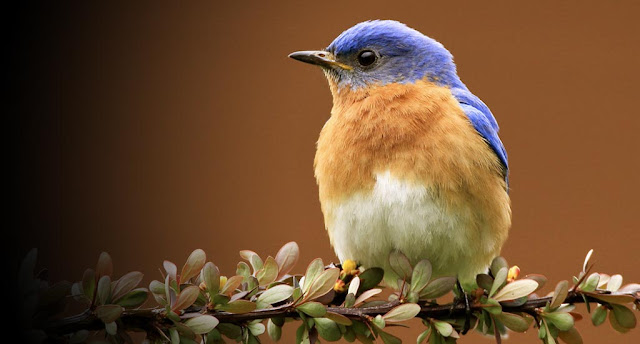 It is a sure sign of spring, and this is a notably early one, when our bluebirds begin cleaning out their nesting boxes.

I love birds and would be hard pressed to name a favorite species, but I have a special place in my heart for Sialia sialis.  My fondness goes beyond the bluebird's precocity, song making and lovely markings (the male and female are stunningly different) and has much to do with their will to survive.

While never faced with outright extinction, the population in rural Chester County, Pennsylvania where I lived for many years had become depleted as they lost habitat and had to compete with three introduced species -- starlings, house sparrows and McMansions.

But bluebirds have come back strong in Chester County because of nesting box programs. Same at the mountain retreat.

The bluebird is a medium-sized, mostly insectivorous or omnivorous member of the thrush family. The males typical have blue and red plumage while the females are less brightly colored. Their song is a soft warble, heard often during breeding season and they seldom sing without quivering their wings.

Bluebirds are extremely territorial and prefer open grassland with scattered trees, which is exactly the kind of habitat off the back deck of the mountain retreat. Absent boxes, like the ones we put up for them in the shade of two tulip poplar trees, they nest in cavities like woodpeckers, typically producing between two and four broods during the spring and summer.

Males take the lead in the breeding ritual, identifying potential nest sites and attracting prospective mates to those sites with by singing and quivering their wings and then placing nesting material in a box or cavity. If the female accepts the male and the nesting site, she alone builds the nest and incubates the eggs.

As Paul McCartney sang to Linda:

Late at night when the wind is still, I'll come flying through your door. And you'll know what love is for, I'm a bluebird.

PHOTOGRAPH BY JOHN LARSON/NATIONAL AUDUBON SOCIETY
Posted by Shaun Mullen at 12:03 AM
Email ThisBlogThis!Share to TwitterShare to FacebookShare to Pinterest