Politix Update: Syrian Child Refugee Crisis Is A Shameful Moment In Our History 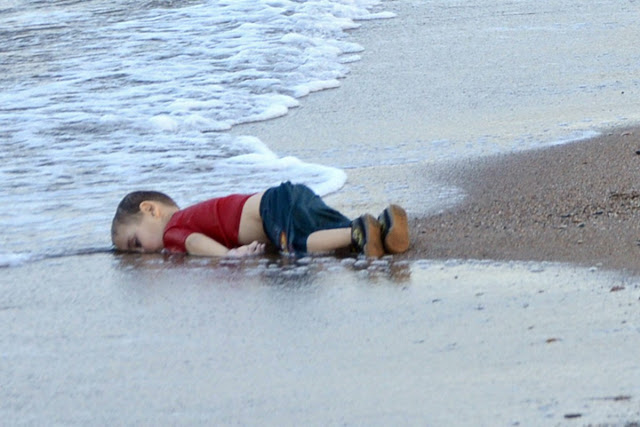 It was the late 1930s and there was a refugee crisis in Europe because of the rise of Nazism in Germany.  My grandfather led local efforts to place refugee children with adoptive families in our small northeastern U.S. city, home to many immigrant communities.  Politicians of all stripes and the leaders of all religious denominations (except for one) came together, and dozens of youngsters were welcomed after arduous journeys, their futures suddenly bright although their families had been torn asunder.  Only the Roman Catholic diocese demurred.  This is because the children were Jewish.

As different as today's refugee crisis is — and the world is a far different if no less unsettled place in 2015 than it was in 1938 — America remains a welcoming haven for the persecuted and downtrodden.  Unless you are a Republican governor or a pandering Republican candidate for president.  This is because the refugees are Syrian.

This is a shameful moment in our history, although it is a moment that has plenty of competition with the long goodbye of the American Dream as it fades from affirming reality to memory, along with the dissolution of other things that once made America great.  And it's not that old prejudices die hard.  We just keep finding new ones.

This moment is all the more shameful because these cowardly so-called leaders don't have the guts to be honest about why they don't want to allow refugees, let alone children, to settle in Alabama, New Jersey and 23 other Republican-led states where the xenophobic sickness that courses through the bloodstream of today's GOP has reached statehouses and governors' mansions. (New Hampshire Governor Maggie Hassan is the lone Democrat.)

The stated reason is that these refugees would be security risks, which by a wide stretch of the imagination would seem to contain a kernel of truth in the wake of the Paris terror attacks and the spreading tentacles of ISIS from its roots in Syria, where a civil war has taken an unspeakable 250,000 lives and left 12 million homeless, most of them children.   But the real reason is that these refugees are viewed as heathens because most are not Christians, and there is only one true God if you are a soldier in the army of self-righteous antediluvians who dominate what passes for conservative political discourse today.  Onward Christian soldiers indeed!

"We are working on measures to ensure . . . that Texans will be kept safe from those refugees," said Governor Greg Abbott.

At least he doesn't have to worry about 3-year-old Aylan Kurdi, a toddler wearing a red T-shirt, blue shorts and Velcro sneakers who was found face-down in the surf on a Turkish beach. He and 22 other refugees had set out in two boats on a 13-mile journey across the Aegean Sea, but their vessels capsized.  Aylan's 5-year-old brother and four other children also drowned.

I reserve an extra helping of shame for New Jersey Governor Chris Christie, who of course also is fear mongering for votes in his fast fading presidential campaign.

Christie says he would bar even "orphans under age 5" from the Garden State.

"I do not trust this administration to effectively vet the people who are supposed to be coming in in order to protect the safety and security of the American people, so I would not permit them in," Christie told conservative talk show host Hugh Hewitt.

Ironically, New Jersey may be the most diverse state in America.  In my brother's North Jersey neighborhood alone, there are Chinese, Vietnamese, Indians, Pakistanis and Russians.  Some are war refugees, including the township supervisor and head of the local board of education.  In fact, my brother is the only native born American on his block.  His wife is a Filipina.

Leading the Islamophobe Brigade on the national stage are Republican presidential candidates.

Canada-born Ted Cruz, whose father was a Cuban refugee, said it was "absolute lunacy" to resettle large numbers of Muslims from Syria. "Who in their right mind would want to bring over tens of thousands of Syrian refugees, when we cannot determine, when the administration cannot determine, who is and isn’t a terrorist?" (I could not find even one documented case of a refugee committing a terrorist act in the U.S.  If you know otherwise, please send me a link.)

Cruz, who is the leading practitioner of refugee McCarthyism, and other Republicans on Capitol Hill are pushing for legislation that would block President Obama's initiative to admit a modest 10,000 Syrian refugees next year.

Marco Rubio, whose parents are Cuban emigrees (and refugees, according to one Rubio's changing narratives) is against admitting any refugees, as are all the other candidates except Jeb Bush and Cruz, who say that it might be okay to admit Christians.  Dr. Ben Carson, who is holier than thou and everybody else, as well, additionally urges legislation to cut off any money to resettle refugees and migrants from Syria, while Donald Trump, who wants to close mosques and has made harsh anti-immigrant measures the centerpiece of his campaign, calls for deporting refugees who have already been accepted into the U.S.  He falsely claims that Christians fleeing Syria "cannot come into this country," but Muslims "can come in so easily."

The three Democratic presidential candidates are in favor of resettling Syrians, with Hillary Clinton and Martin O'Malley both saying they support accepting 65,000.  Bernie Sanders says he would accept more refugees, but has not specified how many.

"What terrorism is about is trying to instill terror and fear into the hearts of people. And we will not let that happen," Sanders declared. "We will not be terrorized or live in fear. During these difficult times, we will not succumb to Islamophobia. We will not turn our backs on the refugees who are fleeing Syria and Afghanistan. We will do what we do best and that is be Americans – fighting racism, fighting xenophobia, fighting fear."

The commingling of refugees with terrorists is morally wrong, but differentiating Christian and Muslim refugees is despicable.

(It must be noted that Islamophobes don't have any problem with selling assault rifles to sicko Christians who shoot up schools and movie theaters in the U.S., the most violent nation in the so-called civilized world.  One National Rifle Association-backed legislator is against admitting refugees because it will be so easy for them to buy guns, but this hasn't given pause to the NRA and their Republican apologists who oppose blocking a legal loophole that allows suspected terrorists on the government's no-fly list to legally buy guns. And doesn't America look like one big smacked ass on the world stage in preaching, even demanding democracy, and then shitting all over our own democratic values?)

"We do not have religious tests for our compassion," Obama said at the G20 summit meeting in Turkey. "That’s not who we are.

"Many of these refugees are the victims of terrorism themselves, that's what they’re fleeing.  Slamming the door in their faces would be a betrayal of our values. Our nations can welcome refugees who are desperately seeking safety and ensure our own security.  We can and must do both."

States do not have the authority to turn away refugees, but they sure could screw things up.  And opposition to refugees is not an exclusively Republican phenomenon.  Many people who vote Democratic surely agree, while one poll finds 52 percent of Americans believe Syrian refugees will make the country less safe.  Opposition to taking in refugee children from Germany in the late 1930s was given greater, while 6 million internal refugees -- black Americans fleeing racial terrorism -- in the Great Migration of the early 20th century faced opposition when they arrived in northern cities.

But it remains the responsibility of our leaders regardless of party or faith to remind us that one of the core values of our society is to be welcoming, especially those poor, huddled masses yearning to be free.  Is mighty America really so frightened of 3-year-old refugee children?

Politix Update is an irregular compendium written by veteran journalist Shaun Mullen, for whom the 2016 presidential campaign is his (gasp!) 12th since 1968.  Click HERE  for an index of previous Politix Updates.