Politix Update: Bow Down To The Republican Doctrine Of Perpetual War 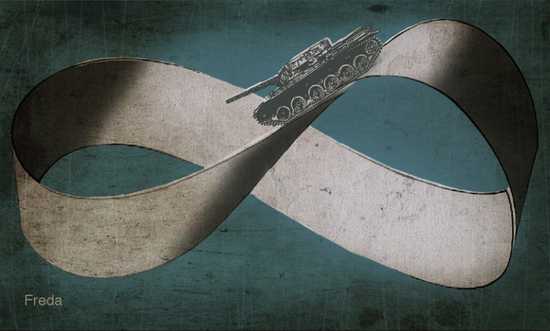 I picked the morning paper off the floor / It was full of other people's little wars / Wouldn't they like their peace / Don't we get bored /And we call for the three great stimulants / Of the exhausted ones / Artifice brutality and innocence ~ JONI MITCHELL, "The Three Great Stimulants"

While no one would accuse presumptive Democratic presidential nominee Hillary Clinton of having the wings of a dove, there is little doubt that most of the Republican wannabes who would like to deny her the White House would plunge the U.S. into yet another war.  Or two or three wars if given the opportunity.  This is because they believe in what I call the Doctrine of Perpetual War.

To the extend that political pundits are addressing the matter, the blame for this mindset is correctly yet shortsightedly put on the George W. Bush interregnum.

But when taken in the larger context of Korea, Vietnam, Bosnia, Iraq, Afghanistan, Libya and, lest we forget, those big evildoers in little Grenada, Americans seem to be okey-dokey with war, and the commander in chief usually experiences a healthy popularity spike.  At least until the casualties mount, the battlefield images become too grisly and the economy tanks.  Still, Dubya's baggage and not the detritus from other conflicts of the past 65 years is what matters in assessing the candidates itching to redecorate the Oval Office, specifically whether they subscribe to another doctrine: The Bush Doctrine.

As best as I have been able to figure, the Bush Doctrine goes something like this:

Going to war after we're attacked or provoked is so yesterday and isn't what makes America great.  After all, we're inherently better and different than other nations because God blessed ours way back in The Beginning and told us we had to mind everybody else's business.  Besides which, defense contractors create jobs.  So we will be more assertive about war and not hesitate to act unilaterally by taking out bad guys wherever they may be.  Because we can.

The trouble is, while there already has been ample chest beating on the Republican presidential campaign trail, candidate after candidate inconveniently but predictably falter when confronted with questions like these:

* Knowing what you know now, would you have invaded Iraq?

* What would you do to halt Russian aggression in Ukraine?

* And what countries would you preemptively invade?

The typical answer from these candidates is that they will not engage in hypotheticals.  A cop-out to be sure, especially when it comes to Russia.

Jeb Bush, on a recent visit to Berlin, bashed Russian President Vladimir Putin, declaring that "You need to deal from strength," which he said President Obama has not, a familiar refrain among all GOP candidates, who characterize him as a foreign-policy weakling.  Bush . . . er, Jeb! promised that he would employ a "more robust" approach to a revanchist Russia.  Asked what that approach might be, he proposed a beefed-up NATO presence along its border with the Baltic states and further sanctions.  Both happen to be exactly what Obama and America's allies are doing.

One pundit half joked that Lindsey Graham's campaign motto should be "Vote For Me Or They'll Kill You," but beyond hints that he wouldn't hesitate to bomb Iran back to the Stone Age, not even this most hawkish of the Republican hawks can come up with anything specific beyond increasing the bloated defense budget.  The Pentagon already sucks up an extraordinary 20 percent of the federal dime, while the U.S. spends more on its military than the next 13 nations combined.

Incidentally, while former U.S. Senator Graham may be a warmonger, he's also a died-in-the-wool chickenhawk who used to claim he had served in Operation Desert Shield and Desert Storm, but in reality was a National Guard lawyer who never left South Carolina during the Gulf War.

WHAT'S A HILLARY TO DO?

Republican candidates have identified foreign policy as a winning issue, which it might well be, but certainly not a top-tier issue.  So it will only be a matter of time before Hillary Clinton, who was for the Iraq War before she was against it ("If we knew then what we know now, I would never have voted to give this president the authority," she now says) finds a way to distance herself from President Obama.

This will require some sleight of hand because Clinton will have to figure out how to separate Obama's first term, with its foreign policy successes, from his second, which has been pretty dismal with the emergence of ISIS, which threatens to gobble up Iraq.  Never mind that this is not the fault of the president.

But will she subscribe to the Bush Doctrine, even under another name?  Expect the same mush-mouthed response you hear from the Republicans.

The last time the Vatican mattered in a presidential election was 1960 when some people feared that John F. Kennedy, a Roman Catholic, would be beholden to the Pope John XXIII in making policy.  JFK won and the pope minded his own business other than to occasionally natter about nuclear disarmament.

Things are rather different 55 years later.  Pope Francis has issued the first papal encyclical on environmental issues, notably the apocalyptic consequences of doing nothing about human-caused climate change, and he got the science right in what for the church is an especially explicit call to social action.  This is giving Republican presidential wannabes fits, notably Jeb Bush . . . er, Jeb!, Marco Rubio and Rick Santorum, who are Roman Catholics and global warming deniers like their GOP brethren.  (Bobby Jindal and Chris Christie also are Catholics, but they have not yet announced their candidacies.)

The pressure on Bush and Rubio, both Floridians, may be especially intense.  The 2014 National Climate Assessment, a scientific study by 13 federal agencies, identified Miami as one of the cities most vulnerable to physical and economic damage as a direct result of global warming.

Bush and Santorum already have told Pope Francis to butt out.

"I hope I'm not going to get castigated for saying this by my priest back home, but I don't get economic policy from my bishops or my cardinals or my pope," Bush said. "I think religion ought to be about making us better as people and less about things that end up getting in the political realm."

Santorum, as is his wont, was less polite in saying the Vatican should stick to saving souls: "The church has gotten it wrong a few times on science, and I think we probably are better off leaving science to the scientists and focus on what we're really good at, which is theology and morality,"

This is a hoot because the key tenet of the climate-change denial crowd's argument is that the science is wrong.  And a double hoot because Republicans in general just love it when religious leaders are involved in politics.

In fact, the 2012 Republican platform mentioned God 12 times, and when Bush spoke at right-wing Liberty University, he declared that "there is no more powerful or liberating influence on this earth than the Christian conscience in action."

Yet Pope Francis ain't going there. "The Church does not presume to replace politics," he said in his encyclical.  "But I am concerned to encourage an honest and open debate so that particular interests or ideologies will not prejudice the common good."

This, of course, is exactly what Republicans fear.

Responding to the terrorist who murdered a pastor and eight congregants at an historically black Charleston church in what obviously was a racist act would require a modicum of delicacy for a white South Carolina politician.  It was sad but not surprising that Lindsey Graham failed that test.

In a deeply offensive and incoherent defense of the flying of the Confederate flag adjacent to the state's capitol despite its obvious racist symbolism, the presidential wannabe said that "[If] at the end of the day it's time for people in South Carolina to revisit that decision would be fine with me, but this is part of who we are. . . . But the problems we have in South Carolina and throughout the world are not because of a movie or a symbol, it’s because of what's in people's heart. You know, how do you go back and reconstruct America? What do we do in terms of our history?"

Showing some leadership and some mettle might be a good start.