Are These Men The Faces Of Evil? No, But The Bush Troika Certainly Was 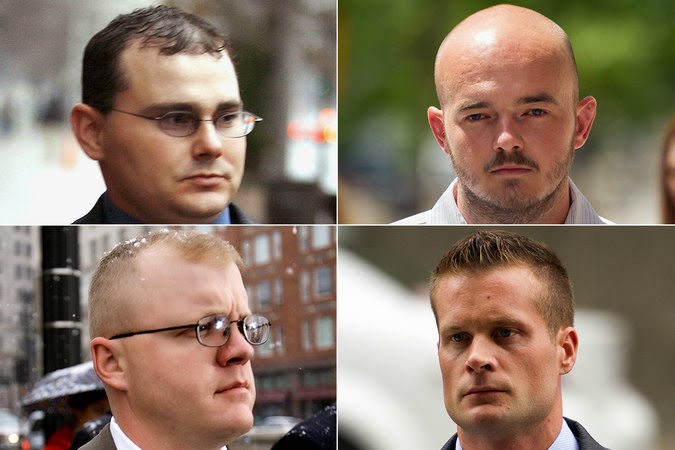 Even as a blogger who wrote extensively about the criminal excesses of Blackwater's patriots-for-profit mercenary army and was appalled at the slaughter of 14 unarmed Iraqis, including women and children, in Baghdad's Nisour Square in 2007 by four of the politically powerful security contractor's thugs, I nevertheless was saddened when a federal judge this week sentenced one of them to life in prison and gave the other three 30-year sentences.

This is because in the end these men were collateral damage, as were the nearly 5,000 Americans and 100,000-plus Iraqis who lost their lives over an eight-year period bookended by a 2003 invasion made under false pretenses and the final draw down of the occupation force in 2011 that was part fulfillment of an Obama campaign promise and Iraqi frustration over American unwillingness to recognize their national sovereignty.

Yes, they should not be allowed to evade guilt, but they were merely gung-ho messengers sent by the real criminals and inculcated with the notion that all Iraqis were the enemy.  Besides which, Iraqis aren't even Christians.

Meanwhile, what of the triumvirate? Former President Bush hunkers down in his suburban Houston bunker, his tattered legacy upstaged by the unapologetic venality of former Vice President Cheney and former Defense Secretary Rumsfeld, who peddle their lies and, as becomes more obvious with every passing year, are the evil men most responsible for bullying their cipher of a president into making the worst foreign policy blunder in American history.

The tough sentences were, in a roundabout way, the result of that unwillingness to recognize Iraqi sovereignty.

No U.S. administration, with extremely rare exceptions, has ever allowed foreign governments to prosecute and try American soldiers and defense contractors for crimes on their native soil, the arument being that they might not get fair trials, and so it was with the Nisour Square massacre.  In its closing months, the Bush administration asked Iraqis to trust the American criminal justice system, never dreaming of the outcome that eventually emerged -- a fair trial and scrupulously honest judge -- despite Justice Department efforts to undermine its own prosecution.   That outcome was less the diplomatic victory declared by The New York Times and other mainstream media than the doggedness of a small handful of FBI agents who investigated the massacre, as well as a quirk in federal sentencing law.

Prosecutors had asked for a life sentence for Nicolas A. Slatten and 50 years in prison for Dustin L. Heard, Evan S. Liberty and Paul A. Slough.  Because the four men used machine guns to mow down the Iraqi victims, Judge Royce C. Lamberth had no choice but to impose mandatory minimum 30-year sentences under a law aimed at gang members during the 1990s crack cocaine epidemic.  Slatten, a former Army sniper, was convicted of murder for starting the massacre with a precision shot through the head of a young man stopped at an intersection, while the other defendants, also Army veterans, were convicted of manslaughter.

Lambeth, a former captain in the Army Judge Advocate General’s Corps, choked up at sentencing as he described the defendants as "good young men who've never been in trouble, who served their country." But he added that the wild, unprovoked shooting "just cannot ever be condoned by a court."

Witnesses testified during a trial last year that the shooting began almost immediately after a convoy of armored Blackwater trucks rolled into the traffic circle at Nisour Square on September 16, 2007.  The defendants said they were shot at by Iraqi insurgents and merely were returning fire, but dozens of Iraqis and several of their former Blackwater colleagues testified that the shooting was unprovoked.

Like the Bush triumvirate, the defendants' superiors at Blackwater skated.

Erik Prince, Blackwater's chairman, trust fund baby, former Navy SEAL and messianic right-winger with close White House and Pentagon ties, had more than $1 billion in government contracts to protect American diplomats, military convoys and do security overflights a result of the chronic shortage of military police and other uniformed personnel that dogged the Iraq war from the start.  When war powers of government are delegated to the private sector, bad things tend to happen -- and did in spades in Iraq.

Prince landed on his feet despite the bad publicity and merely moved his operations to under the name Xe Services.  He sold Xe in 2009 and moved to Abu Dhabi, where he heads a private equity firm.

Four widows of Blackwater mercenaries killed by a mob in Fallujah in March 2004, their bodies hung from the trestles of a bridge, had the temerity to sue Prince, asserting that in an effort to increase profits, Blackwater failed to provide the armored vehicles, weapons, maps and necessary lead time in which the four men could have familiarized themselves with the area.  Prince's response was to take a page from the Dick Cheney playbook and claim that Blackwater was above the law.  When that ludicrous argument failed to pass muster with the courts, Blackwater countersued the men's estates to try to silence the widows.  The case was settled out of court in 2012.

In Iraq, the company was perceived as being so powerful that its mercenaries could kill anyone and get away with it. Mohammed Hafedh Abdulrazzaq Kinani, whose 9-year-old son, Ali, was killed in Nisour Square, said as much at the sentencing.

"Blackwater had power like Saddam Hussein," Kinani told the judge.  "The power comes from the United States. . . . Today we see who will win. The law? Or Blackwater?"