Rumors Of The Newspaper Industry's Death Are Not Greatly Exaggerated 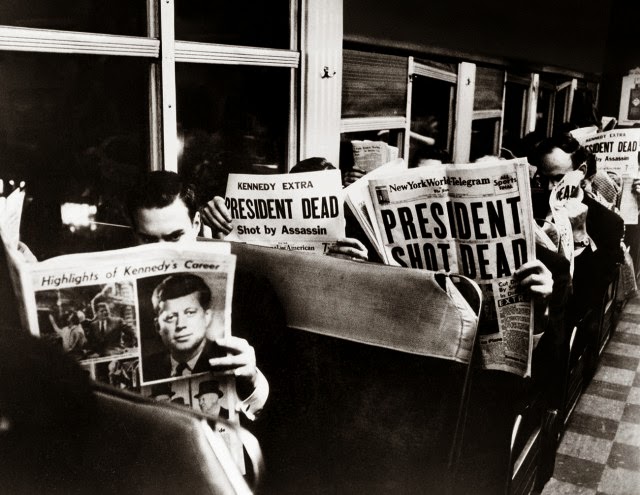 I'll have some of whatever people are smoking who believe that daily newspapers -- the ones that have made it to this point, that is -- can survive in our increasingly digitized world.  A big hit of whatever they are smoking, please, because all evidence points to the contrary.  In fact, the newspaper industry is in free fall.

There are exceptions, of course.  The New York Times is prospering and has never been better, and I say that as a 35 year veteran of working for daily newspapers who picked up a few Pulitzer Prize nominations along the way, survived and turned to blogging because he couldn't stop scratching his writerly itch.  (More about The Times a bit later.)  But with damned few exceptions, the outlook for newspapers in both dead tree and online incarnations is as black as an inked printing press just before the bulldog edition runs.  Remember them?

Newspapers live and die by ad revenue, not circulation, and by this key measure the news (pardon the pun) is exceedingly grim: Print ad revenues, which in recent years have been combined with digital revenues, are now the lowest they've been in the 64 years since the Newspaper Association of America began tracking industry data. That's 1950, when Truman was president, there was distant thunder from the Korean Peninsula, the New York Yankees would win the second of five consecutive World Series, the U.S. population was less than half its current size, and the economy was about one-seventh as big. Newspaper ad revenues are down more than 50 percent in the past five years alone.

Things have gotten so bad that the Newspaper Association has stopped reporting quarterly advertising revenue data and now releases only annual data. Explained association CEO Caroline Little, it was "time to stop beating themselves up four times a year with the negative numbers."

* * * * *
In a June 2008 post titled "The Great Mainstream Media Implosion," I wrote that there were "two perversely complimentary trends" that had sewed the seeds for the news media's (as opposed to merely print media's) implosion:

* The consolidation of print and broadcast media ownership into a few corporations that put their share price before the quality of their product at a time when the decline of readers and viewers was well underway.

* The inability of the print and broadcast media to understand that the Internet revolution would render their ossified business models obsolete, and when that reality finally sunk in, their halting attempts to develop new models.
With the hindsight of six years, my analysis was pretty much spot on, thank you, but I could not have anticipated the enormous growth of social media and a corresponding decline in interest in news.  The Daily Show excepted, of course.

Newspapers painted themselves into an especially tight corner.
When I came into the business in 1967 at the tender age of 20, most reporters and editors drank like fish and smoked like chimneys (on the job), lived and died for the news scoop, type was set on massive Linotype machines using molten lead, and when the presses of morning and evening newspapers rolled it was like printing money.

Today the remaining newsrooms are like vegetarian cafeterias, the scoop is most often the purview of cable news channels and celebrity gossip outlets like TMZ, the typesetting and printing process is electronic, and when the presses roll for the remaining morning papers (there are no evening papers as such anymore), one can only wonder how many years it will be before they are silenced.

Even as a tireless advocate of scraping the old business model, I probably would not have been able to render my judgment that the media is stumbling toward irrelevance if I still was on the inside looking out. The ivory tower does that to you.

I was a buyout baby – taking an early retirement package offered by the once great Knight Ridder newspaper chain nine weeks before aircraft were crashed into the World Trade Center and Pentagon by Al Qaeda operatives whose pre-9/11 activities had alarmed a small handful of CIA and FBI agents who were unable to get their somnambulant bosses' attention. It fell to independent journalists and not the mainstream media to expose this shocking back story.   Ditto with what was really going on in Iraq and the lame justifications for that fool's errand.

A bad economy has been a player, but economic ups and downs have been an aspect of the business since John Peter Zenger published the New York Weekly Journal in the early 18th century, so economic conditions are a lame and self-serving excuse.

In the case of the Philadelphia Daily News, where I labored for two decades, the story has been pretty much lousy upper management: Knight Ridder sold the Daily News and sister Philadelphia Inquirer to another media chain, which then sold them for a cool $551 million in 2006 to the first in a succession of what would become six owners over the next eight years, all of whom had no experience running newspapers and some who were more interested in cashing in on the papers' iconic office tower, which eventually was sold for $22.7 million, and meddling in the newsrooms.  The sixth owner, a Democratic power broker, is expected to ante up a measly $55 million for what is left of the papers, which have won a combined 22 Pulitzer Prizes.

Not long ago, I cared deeply about the future of newspapers. And I acknowledge that my doom-and-gloom scenario is tempered by the reality that newspapers, especially in smaller communities, will continue to be vital sources of information. How else to find out what the school lunch menus are?  But newspapers in general will continue to lose their standing as the most important sources of information and opinion, and the place and power of the Fourth Estate will become as archaic as those Linotype machines. The television news media will not be far behind.
* * * * *
It is Michael Kinsley's educated view that "high-quality journalism," which he says in his inaugural Vanity Fair column is seen by some people as being doomed by the Internet, will survive.

Kinsley founded Slate magazine way back in 1996.  Today Slate is owned by the Washington Post, which is owned by Amazon founder Jeff Bezos, who picked up this shell-of-its-former-self newspaper at the fire-sale price of $250 million last year.  I love Slate, and if I could take only one journalist to a desert island, it would be Slate's Dahlia Lithwick, who not only knows what she writes about -- usually the conservative soap opera known as the U.S. Supreme Court -- but does so in depth and with an edge.

Kinsley's column is a disappointment.  It does not live up to its headline, and he meanders around in making the argument that good stuff will survive the onslaught of the Internet, which in reality is eating newspapers for lunch.   I'm also afraid Kinsley is conflating edgy journalism with quality journalism, which he can do because he is a media guru, but which I will not do because to me quality journalism is predicated on digging, digging and more digging.  If the result is written with an edge, so much the better.

The problem is that there are fewer and fewer outlets for quality journalism.  Many of the newspapers that supported investigative journalism -- or for that matter pursuing any story that might take a few days or weeks or months to pan out -- chucked those kinds of stories in their initial rounds of cost cutting.  Investigative reporting is a dying field because too many of the  newspapers that have survived have become controversy averse, while others cannot justify assigning a reporter to chase potentially litigious stories for months on end when there is no guarantee that they'll ever see the light of day and every guarantee that they'll piss people off.
* * * * *
This finally brings us (back) to The New York Times, which has not only survived the scandal-plagued Howell Raines-Bill Keller eras (can you say Judith Miller and Jayson Blair?) but as noted above has never been better.  This is because it balances quality journalism with edgy stuff.

Some recent examples of quality journalism include Walt Bogdanich's probing takeout on less than half-assed efforts by the Tallahassee police and Florida State University administration to investigate an allegation that star quarterback Jameis Winston, who went on to win the Heisman Trophy and lead the Seminoles to the 2013 national championship, raped a student, as well as a series last year on America's dysfunctional and outrageously expensive health-care system, and another series this year on the travails of the middle class.  And for edge, it is tough to beat a contest in which readers were invited to submit a haiku, a 17-syllable poem, about New York City.

Then there are recent forays into combining stories with videos and sound clips, notable among them the shocking "Boys in the Bunkhouse," an expose into how mentally challenged men who worked at a turkey processing plant in a small Iowa town were virtual prisoners in a group home for some 30 years, and the delightful "Ballad of Geeshie and Elvie," about the hunt for two phantom women who changed American music and then vanished without a trace.

No other newspaper has The Times deep bench, of course, but there is no better model for what newspapers can and should do as they fight their way into the cyber future while not abandoning traditional, pre-Internet values.

Photograph by Carl Mydans/Time & Life Pictures
Getty Images via Vanity Fair
Posted by Shaun Mullen at 12:00 AM
Email ThisBlogThis!Share to TwitterShare to FacebookShare to Pinterest

I share most of your views on the ultimate demise of tree-killing hard-copy newspapers. I have a bit more hope, but not much, that fat cats with liberal hearts -- or just entrepreneurial risk-taking spirits -- will eventually keep underwriting efforts like Pro Publica to get something approaching investigative effort into public hands that want it. I'm thinking when the networks -- broadcast, network, online, whatever -- run out of options to get news from overseas, they might start funding start-ups to go back into that fray at some point, just to fill their 24-hr cycles. Twitter & Facebook can't fill the entire breach, or at least someone will have to edit, prioritize and vet them for accuracy.

But just as front-page design goes in cycles, and everything old is new again, I suspect it won't be long before many of the precepts we hold dear are reborn online for a new & younger audience demanding it -- just like those old folk blues.