Meteorological Indignities & The Winter Of Our (Well, My) Discontent 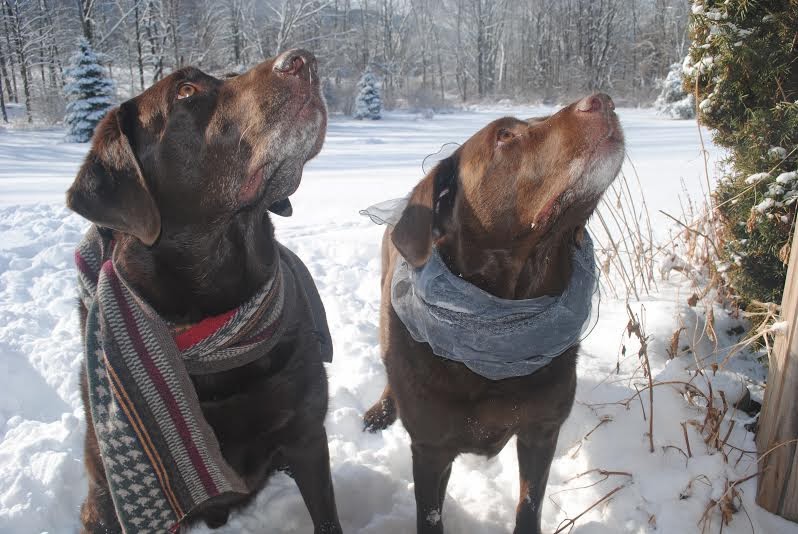 Not the fact that there have been only a few hours of temperatures above freezing since New Year's Day.  (The afternoon of January 31; ah, I remember it well.)

Not the half-assed job the highway department has done in keeping the road past the mountain retreat open. (Multiple plowings after a minor snowfall on a Sunday, an overtime day, and neglect after a 10-inch snowfall on a weekday.)

Not that the snow pack is so deep and hard from repeated snows.  Jack and Nicky can't walk on it because it's so damned slippery, and have taken to having to do their business in the driveway.  (You can see from the photo that they're not exactly miniature poodles.)

Not the weather forecasters getting it wrong pretty consistently. (Mark Twain was right.)

Not coming upon photos of the lagoon where we would hang out in the dead of winter in the Florida Keys.  (In the buff.  In the 1970s.)

Not that 5,000 or so miles from Sochi, driving on ice hereabouts is like an Olympic event. (The interstate yet again closed by jackknifed tractor trailers, ho hum.)

Not that we'll end up burning three tons of coal before spring is sprung. (While the solar roof panels won't generate electricity because they're snow covered.)

Not having to wear a long-sleeved turtleneck and socks to bed some nights.  (I haven't worn pajamas since I was a teenager.)

No, the final indignity was the nor'easter.

As in a foot of wind-driven snow on the front end yesterday morning and another eight inches on the back end last night, including an extraordinary four inches in one hour.  Can you say five-foot drifts?

But hey, the power stayed on and we're pretty cozy.  Just hoping we can make our way out this evening for a Valentine's Day dinner and back home for the kickoff of the second season of "House of Cards."

Happy Valentine's!
Love the puppies scarfs. Do they actually wear or only for the picture.
Sorry to hear about all the snow, but thank goodness no power loss.
Take care, thanks for the read.