A Special Report: When Bad Things Happen To Good Dogs. Yes, Yours, Too 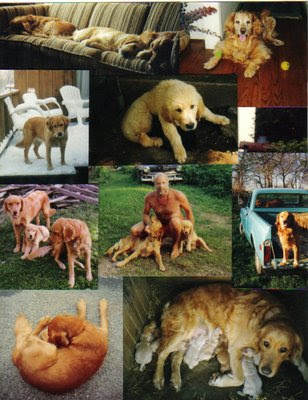 Some of the Golden Retrievers in the author's life
Some 71 million American households have at least one dog and the number is growing.  We are increasingly making provisions for them in our wills, buying health insurance for them and pampering them with a dizzying array of special foods and nutritional supplements.

Although all breeds of dogs, and mutts as well, draw from the gene pool of the species Canis lupus familiaris, each my Golden Retrievers and the Goldies on the farm where I long lived had their own distinctive personalities, even in the cases of a mother and daughter and two brothers.  If you did not like dogs, you were not welcome to become a housemate at that farm and one of us short circuited a budding romance after the woman he had fallen for admitted that she didn't particularly care for them.

Our dogs, most of them anyway, looked out for us, barking furiously when a car approached and growling when they sensed a visitor was up to no good.  The dogs played us like cheap violins, manipulating us emotionally in ways that we never would allow people to do.  And we loved it.  We loved practically everything they did, from fetching the newspaper at the end of the driveway in the morning to putting their heads on our feet when we sat at the kitchen table at night.

Dogs are full-fledged members of many of our families and when they die we mourn them as we would a child or parent.   And die they all eventually do, although some breeds do so at an alarmingly young age of by now  predictable conditions and diseases.

My own non-scientific view, one based on a lifetime of experience, is that dogs live longer and healthier lives when fed good food (forget about special foods and nutritional supplements, which can be quite expensive, make little difference but are cash cows for many veterinarians), don't eat on demand and are given bowls of kibble in the morning and evening, based on their ideal body weight, aren't given table scraps, and perhaps the key element -- are exercised daily.  Not when you feel like getting off your lard ass but every single day no matter the season or weather conditions.

The smorgasbord of conditions and diseases that now seem ever present in most breeds is borne out in "Mortality in North American Dogs from 1984 to 2004: An Investigation into Age-, Size-, and Breed-Related Causes of Death" that was published last year in the Journal of Veterinary Internal Medicine.  And make no mistake about it, many of these pathologies are a result of overbreeding, or to be charitable, breeding for desired characteristics that can considerably shorten a dog's life span.

The study is a must-read for dog lovers and especially those who have or are interested in breeds whose life expectancies -- in the case of Goldies once 15 or 16 long years and now often as short as 9 or 10 years, and sometimes even shorter -- as well as greedy breeders who keep prospective owners in the dark about breed-specific conditions and diseases, which far too many do, as well as clueless, hands-off veterinarians, which far too many are.

Study co-authors Dr. Kate Creevy and Daniel Promislow examined data from the Veterinary Medical Database to determine the cause of death for nearly 75,000 dogs over the 20-year period from 1984 through 2004.  They classified the deaths into organic system and pathophysiologic process catagories and further analyzed data by breed (some 82 in all), age and average body mass.

Here is a breakdown of the five breeds with the highest relative proportion of causes of death in the two major categories:

Good scientific studies sometimes raise more questions than they answer, and "Mortality in North American Dogs" does just that.  One particularly interesting finding is that while larger breeds tend to have shorter lifespans, the larger examples of these breeds tend to live longer.

The study's authors note that "Dogs from larger breeds seemed to be spared death because of neurologic or endocrine diseases.  Neoplastic disease was a more frequent cause of death in dogs from larger breeds, whereas dogs from smaller breeds had increased risk of death because of metabolic processes.  Traumatic causes were responsible for death in dogs from larger and smaller breeds at similar rates.  Given these findings, we support future research into the disproportionate rates of musculoskeletal and neoplastic disorders in dogs from larger breeds to better understand their shorter lifespans."
Amen, while I hasten to add what the authors only allude to: Some dogs will live to ripe old ages if they don't contract these disorders earlier but will succumb to others later.  Then there are the victims of traumatic causes of death, most often being hit by motor vehicles.
The three most represented breeds in the study are, in order, Mixed Breeds, Labrador Retrievers and Golden Retrievers and Goldies have been of special concern to me because of my own premature death experiences and those of friends.

As I write here, the outlines of the Golden epidemic have been clear for over 10 years, but organizations like the Golden Retriever Club of America (GRCA), while funding studies on and supporting research into the cancers, have done little or nothing to rein in greedy member breeders who play God in knowingly selling interbred, cancer-prone puppies to unsuspecting buyers who end up heartbroken.

This blog post has become somewhat of a Wailing Wall for people who have lost their Goldens. Some 52 of them have shared stories of their losses over the last four years. The average age of these dogs was only 7.8 years.

The rationale of he GRCA is, in so many words, that it's not their job to educate breeders and owners about the epidemic. The club's homepage contains no mention of the epidemic and it has not updated its National Health Survey of the breed since 1999.

The GRCA has gone so far as to recommend that owners give their Goldies a regular regimen of a drug that has been shown to inhibit cancers, which is not unlike a car manufacturer recommending that drivers wear crash helmets when using vehicles that it knows cause an inordinate number of fatal accidents.

* * * * *
An abstract of the study is available here online.  A copy of the entire study costs $35, but if you email me at kikokimba@gmail.com and provide your name and snail-mail address, I will send you a copy gratis.