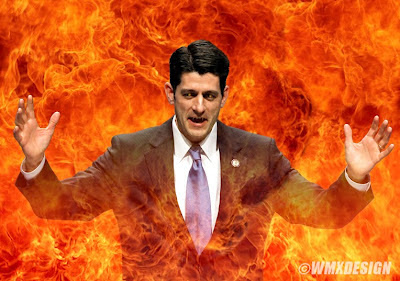 There is much to like in the Republican budget plan rolled out by Representative Paul Ryan last week. That is if you are a millionaire, a Wall Street fat cat or and don't have to worry about what happens if you become ill. But if you are like the many Americans who are struggling to make ends meet, wondering how they can afford to send their kids to college and whether the federal safety net will be there for them when they're elderly, the plan is an unmitigated disaster. And like Ryan's not dissimilar plan last year, is a study in political cruelty.

The plan may pass the Republican-controlled House relatively unscathed, but the early signs are mixed: It cleared the Appropriations Committee by a narrow 19-18 vote after two Republicans defected, likely mindful of how a yea vote would play back home with voters come November.

The plan has no chance of approval in the Democratic-controlled Senate, where a few Republicans who also have an eye on re-election may also vote nay, while it faces ferocious opposition on Main Street because of it is seen as a deal with the devil: Eviscerating popular social programs in order to lower taxes for the rich.

There is another reason as well: The Republican Party, deeply discredited during the Bush years, remains extremely unpopular nationally. (The 2010 midterm election was a fluke, kiddies.) This is not to say that President Obama and Democrats don't have popularity problems of their own, but the GOP's embrace of positions out of step with the electoral mainstream will win it no new friends and the Ryan plan is an albatross that Mitt Romney, now the presumptive nominee, will have to wear around his neck no matter how vigorously he Etch A Sketches.

Those of us of the liberal persuasion often forget that people like Ryan really mean it when they set out to coddle the rich and screw the rest of us, and there is a certain logic, however perverse, to his Reverse Robin Hood thinking.

Republicans believe that taxes are too high and defense spending is too low, but doing both under Ryan's plan would increase the budget deficit by a whopping $2 trillion. So if Republicans are going to remain politically pure -- and that, of course, trumps all policy concerns, let alone the public good -- the difference can only be made up by deep cuts to the programs that benefit the have-nots.

How to accomplish this?

* $1.6 trillion would be slashed from Medicaid and other non-Medicare health programs.
* $1.5 trillion for the Affordable Care Act in the service of subsidizing the health insurance of low-income Americans would go bye-bye.

* $200 billion would be pared from the education and worker training programs that have sustained many unemployed workers.
* Food stamps would be capped at a low rate although the price of food continues to rise.

* Certain tax loopholes for the wealthy would be closed, but the proceeds would fund a tax cut.

The November election will be about a lot of things, among them the war in Afghanistan, Iranian nuclear ambitions and Chinese competition. But most of all it will be about an economic recovery.

When the Ryan plan is viewed in an economic context
it is a disaster as well as a hard sell for a presidential nominee-to-be who infamously said "I like being able to fire people who provide services to me." Yes, Democrats took the statement out of context, but there still was a ring of authenticity to it.

Sympathetic commentators have written that they don't believe Ryan wants to balance the budget on the backs of the have-nots, but that happens to be the only way to make the plan's numbers work. I think that the answer is even more fundamental than that: The plan is just as unrealistic and therefore unserious as last year's. Oh, and poor people don't vote Republican.

What? Poor people don't vote Republican? The poorest states tend to be the Republican strongholds. Your claim doesn't make any sense at all.

Yes and no. The poorest states do tend to vote Republican but poor people in those states, with few exceptions, do not.

The very few poor people in the red states that might vote republican are being wiped out by the voter suppression laws.