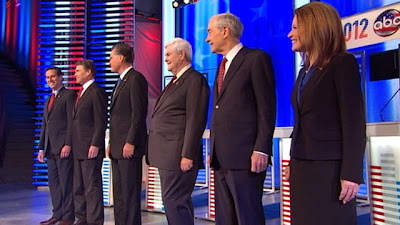 Barack Obama, his back to the wall because of a recession he inherited, an opposition party happy to see ordinary Americans suffer, as well as problems of his own making, must believe in his heart of hearts that his chances of being re-elected improve by the day as the Republican presidential wannabes continue their Wiffle Bat war.

Donald Trump,who became road kill after the bottom dropped out of his campaign, is back with a vengeance. No, he’s not going to host the post-Christmas debate. That’s off the table, but he has begun another round of “I just might” still run if he is displeased with the other candidates.

“I must leave all of my options open because, above all else, we must make America great again!” Trump said in an exclamation point-laden statement that could have been written by a teenager with a Justin Beiber crush but did not allude to the obvious: He has become toxic because of his birther blatherings and repeatedly saying that he may be a spoil sport.

THE CW TAKES YET ANOTHER HIT

The Moderate Voice editor-in-chief Joe Gandelman hit the ball out of the park the other day when he wrote that the conventional wisdom keeps failing because it feeds on itself.

This truth goes a long way in explaining why the pundits keep being blindsided in the game of music chairs being played by the Republican presidential field. Candidate A is on top when the music stops only to be replaced by Candidate B, who has come out of right field (literally and figuratively) to seize the lead in the polls.

The current CW is the prospect of a drawn-out battle for the nomination between Mitt Romney and Newt Gingrich, but that fails to take into account Ron Paul, who is surging in the polls as the Iowa caucuses approach.

In every current poll save one, Paul is been neck and neck for second place in Iowa behind Gingrich, and in one poll the former House speaker leads Paul by but a single point, 22 percent to 21.

A LEGAL AND A MORAL ISSUE

Republican strategists have made no secret of using voter suppression tactics to keep down turnout, which in theory helps the party because of its shrinking base.

This prompted Attorney General Eric Holder to signal that the Justice Department will be aggressive in reviewing new voting laws that civil rights advocates say will dampen minority participation in 2012.

Declaring in a speech this week that protecting ballot access for all eligible voters "must be viewed not only as a legal issue but as a moral imperative," Holder urged Americans to "call on our political parties to resist the temptation to suppress certain votes in the hope of attaining electoral success and, instead, achieve success by appealing to more voters."

The Voting Rights Act of 1965 empowers the department’s civil rights division to object to election laws and practices on the grounds that they would disproportionately deter minority groups from voting — even if there is no evidence of discriminatory intent — and to go to court to block states from putting the laws in place.

WHEN IT DOUBT, PRAY

What’s a poor Iowa evangelical to do? Two of the leading Republican candidates are a Mormon and a twice-divorced Catholic, which might lead one to believe that this is a welcome sign the evangelicals have lost their outsized influence in the Republican Party.

Not really. It’s more of a sign that evangelicals have matured as a voting bloc and without a Bible thumper like Mike Huckabee rally around are willing to look the other way regarding a conservative candidate’s faith if they agree with him on policy.

"The fact that Romney and Gingrich are leading the pack of Republican presidential contenders . . . shows not the weakening of the movement but rather its diversity and the pragmatism that comes with maturity," Land tells The New York Times. "These social conservatives are going to coalesce around the person they believe has the best chance of making Obama a one-term president."

Besides which, he says, evangelicals believe Gingrich when he says he has gone to God for forgiveness for his serial infidelities.

A STRATEGY REPUBS WILL LOVE TO HATE

Guess who has far and away the biggest campaign organization in Iowa? Barack Obama.

This year and next are not 2008, but the incumbent is raising buckets of money, has put together a formidable campaign operation in Iowa, where he has eight offices and more staffers on the ground than any Republican candidate, and already is campaigning in crucial swing states.

Obama’s strategy is set: A populist message like that he delivered in Kansas last week in which he vows the fight for the middle class and against income inequality. The expectation is that this will reverberate with independents and women, hopefully bring disillusioned Democrats back into the fold, and is precisely where the Republicans, no matter who the eventual nominee is, are the most vulnerable.