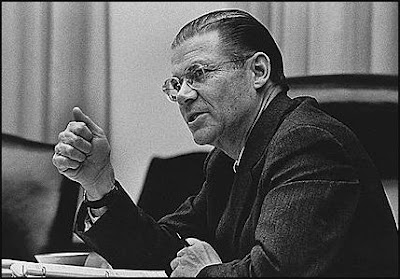 The dust-up over Duty: Memoirs of a Secretary at War by Bush-Obama Defense Secretary Robert Gates recalls to mind two other secretaries who were as controversial as Gates was circumspect.  Herewith excerpts from a July 2009 post.

The similarities between the two men are stunning, but there is a big difference that sets them apart.

Like Rumsfeld, McNamara was a control freak who thought he had all the answers, pushed policies that lacked the crucial element of common sense, surrounded himself with sycophantic acolytes, did not take kindly to dissenting generals, was a technocrat who worshipfully embraced sophisticated weaponry, projected an unshakable faith that he was doing the right thing, communicated poorly in public forums . . . and turned out to know jack about how to run a war. 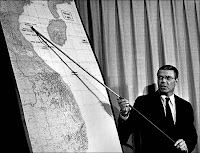 And like Rumsfeld, was forced out or quit depending upon whom you talk to.

But in a major departure from Rumsfeld's modus operandi -- at least to date, from what we know of his forthcoming and unapologetic memoir and in all likelihood for all time -- McNamara had a catharsis some 15 years before he laid on his death bed.

That catharsis took the form of In Retrospect: The Tragedy and Lessons of Vietnam, a candid reflection that exploded on the haunted members of my generation -- whether they be Vietnam era veterans like myself or antiwar activists -- like a long forgotten Claymore mine.

McNamara has never explained the circumstances of

his catharsis, that point at which he realized his manifold failures as defense secretary and the immense suffering, death and deprivation that he and LBJ were responsible for. One can only assume that it did not come to him in the middle of the night a la Ebenezer Scrooge and the Ghosts of Christmas Past, Present and Yet to Come, but rather in a drawn out metamorphosis befitting a man of his intellect and analytical skills.
McNamara never actually apologized for his role in the Vietnam debacle, but clearly was haunted by it, and his mantra became "We were wrong, terribly wrong."

Rumsfeld, of course, has not apologized and it is difficult to foresee that he will ever do so. But is he too haunted

Nearly 3,000 Americans had been killed in when Rumsfeld bailed; the number now stands at over 4,000. And continues to grow.

* * * * *
Apropos to the Bush torture regime and the time in which we live, a question is being asked anew: Was McNamara a war criminal?

McNamara never answered the question directly, but did have this to say in Erroll Morris's The Fog of War documentary in the context of his work as a young officer evaluating the effectiveness of Army Air Force missions over Japan for General Curtis LeMay, many of which were firebombings that wrought enormous death and destruction:


"I don't fault Truman for dropping the nuclear bomb. The U.S.-Japanese War was one of the most brutal wars in all of human history -- kamikaze pilots, suicide, unbelievable. What one can criticize is that the human race prior to that time -- and today -- has not really grappled with what are, I'll call it, 'the rules of war.' Was there a rule then that said you shouldn't bomb, shouldn't kill, shouldn't burn to death 100,000 civilians in one night? 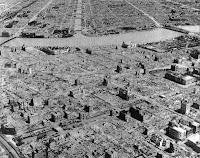 McNamara was onto something, while I cop to historical context and draw on my knowledge of World War II, Vietnam and Iraq, in trying to answer the question without resorting to the Welcome to the Platinum Tier of Hell indictments ricocheting around the blogosphere.

The War in the Pacific had to be fought. Oh, and paybacks are a bitch. The sadism that the Japanese 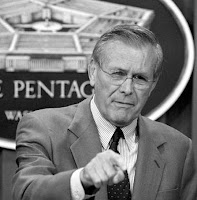 inflicted on Americans and their allies, as well as disregard for the lives of their own infantrymen, fliers and subjugates invited the Yankee payback.

The history of the Vietnam War is less forgiving on whether the conduct of McNamara, as well as LBJ, was criminal.

That history did not begin with the defeat of the colonial French army at Dien Bien Phu in 1954, but rather all the way back in 1947 when a young Ho Chi Minh all but begged the U.S. to support him in a nationalist independence movement and was blown off. U.S. troops began to trickle into Vietnam under false pretexts and the Johnson administration shifted from rationale to rationale and strategy to strategy before Richard Nixon finally conceded defeat in 1975. 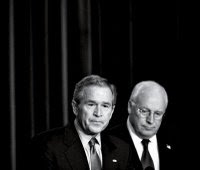 Furthermore, and as McNamara admitted in In Retrospect, he knew that the war was futile, if not wrong.

In all three wars, "mortal men [were] cast into giants' roles," to use historian Max Hasting's term. Can it be that McNamara was not a war criminal as an advisor to LeMay but was regarding Vietnam?

Yes, despite his candor about the former and contrition about the latter. Can it be that Dick Cheney and Donald Rumsfeld are war criminals as regards Iraq? Definitely.