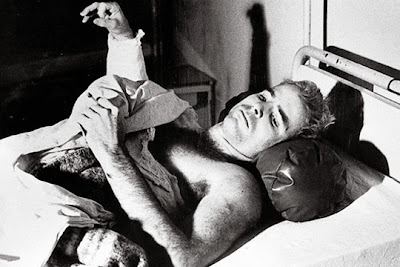 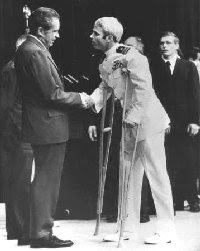 Don't expect the Bush administration's embrace of Nazi-like torture techniques to be a talking point as the presidential campaign heads into the home stretch. As despicable as the practice has been -- and made worse by the cover-ups, obfuscations and junk-law opinions justifying its use -- torture simply isn't on the radar screen of most voters.

That so noted, and overlooking any mental torture that previous presidents may have suffered at the hands of their First Ladies, John McCain becomes the first potential president to have been physically tortured by an enemy while serving his country. As he has written in his memoirs, his North Vietnamese jailers withheld medical treatment, forced him to stand for long periods of time, put him in stress positions, beat him and deprived him of sleep during five and a half years of captivity.

All are clearly torture techniques, right?

Not according to Dick Cheney, the architect of the torture regime. Not according to his feckless boss, who long denied that he approved of torture and then publicly embraced it. Not according to the former concierge of the eponymously named Rumsfeld Gulag, a global system that includes Guantánamo Bay and secret prisons in foreign countries and aboard U.S. Navy ships. Not according to David Addington, who has proudly served as Cheney's dungeon master.

It is the view of all of these cowards, smugly reinforced in John Yoo's ethically- and morally-impaired Justice Department memos, that McCain was not tortured because the techniques employed against him were merely used to extract accurate information.

And so, as Andrew Sullivan wrly notes:

"The false confessions that McCain was forced to make were, according to the logic of the Bush administration, as accurate as the 'intelligence' we have procured from 'interrogating" terror suspects.

McCain's service during the Vietnam War must be honored on its face. That is in no way diminished by the fact he was, by many accounts, the spoiled brat son and grandson of admirals and an underachiever at the Naval Academy and in the cockpit. He destroyed no fewer than three fighter jets (or four or five, depending upon the account) in the months before he was shot down, quite possibly because of the trademark impetuosity we saw in his selection of Sarah Palin.

But that is where I draw the line as a fellow veteran, albeit one who was never war hero material.

McCain has flipped and flopped on torture since the Bush administration's mischief first saw the light of day and hasn't spoken out forcefully against it -- let alone commented on it -- since he launched his campaign. Meanwhile, he has shamelessly played the POW Card when he doesn't want to answer a question.

Because in the end, accruing power and prestige has been more important to McCain than standing up for veterans, let alone standing on principle, which makes his newly minted claim that he is an agent of change so patently false.

BIDEN SPEAKS HIS MIND
Barack Obama has been fairly circumspect about whether he would push for the prosecution of Bush administration officials for war crimes and other illegal activities, while running mate Joe Biden is more direct:

"We will not be stopped from pursuing any criminal offense that's occurred . . . If there has been a basis upon which you can pursue someone for a criminal violation, they will be pursued."

As far back as 2004, participants in White House meetings on torture were objecting to calls for minimum treatment standards for detainees not just because of their belief that the U.S. had to be protected from future terror attacks, but because they needed to protect themselves from future legal repercussions, and backpedaling would be evidence that they understood they were legally liable.

BRITISH COURT RULES FOR U.S. TERROR SUSPECT
Despite vehement and repeated denials by the U.S., a British court has ruled that a terrorism suspect's claims that he was renditioned to Morocco and tortured there before being transferred to Guantánamo Bay were credible.

The court did not discuss the evidence it had seen regarding the suspect, Binyam Mohamed, an Ethiopian who was a British resident before his arrest six years ago, but said there was "no good reason" for the American government to refuse to turn over to his lawyers materials that might help him prove his assertions before a military tribunal.

Because the U.S. would not give the lawyers this information, the court said the British government has an obligation to turn over potentially exculpatory material in its own files.

Mohamed is accused of plotting to explode a "dirty bomb" in the U.S.

JUST SAY NO TO RENDITION
The U.S. and Poland have long denied that the Eastern European country has been home to a CIA prison that is part of the Rumsfeld Gulag.

But Reuters reporter Gabriela Baczynska has learned that the Polish prosecutor's office is now investigating the allegation following the refusal of three successive central governments to come clean.

Polish political parties have played down speculation about the existence of the prison. This is because under Polish law a Pole who was party to an agreement allowing the CIA to torture suspects could be sued in the regular courts or even in the State Tribunal, a special court for government officials.


NO BISCUITS FOR DIANE
Lieutenant Colonel Diane Zierhoffer, an Army psychologist who ordered the torture of a juvenile, Mohammad Jawad, has invoked her right not to incriminate herself and refused to testify at a Guantánamo hearing on whether charges against the terrorism suspect should be dismissed.

Zierhoffer's testimony would have marked the first time that a member of the secretive Behavioral Science Consultation Team (known as BSCT or "biscuits") had been called to testify in a detainee hearing. The BSCT program has been highly controversial among psychologists and other health-care professionals.

" . . . The evidence in this case confirms our worst fears, that military psychologists are working to break down detainee's psyches."

Dr. Stephen Soldz, an expert psychologist who was called by Frakt, testified that Zierhoffer had violated the professional credo of "Do no harm."


THREE DOWN, MANY MORE TO GO
Three more victims of rendition and torture have been released from Guantánamo after their cases fell apart under scrutiny.

Andy Worthington focuses on the story of one, Mohammed Saad Iqbal Madn, at American Torture:

"Quite what Madni was supposed to have done to justify this torture and abuse was never adequately explained at Guantánamo. The U.S. authorities urged the Indonesians to arrest him after they claimed to have discovered documents that linked him to Richard Reid, the inept and mentally troubled British 'shoe bomber' . . . but Madni persistently denied the connections. In his Combatant Status Review Tribunal -- in which he pointed out that he is from a wealthy and influential family, is fluent in nine languages and is a renowned Islamic scholar -- he maintained that he was betrayed by one of four radical Islamists whom he met by accident on a trip to Indonesia in November 2001 to sort out family business after his father's death."

And so it goes.

THOSE WHO DID NOT GO CRAZY
It is worth noting (again) that for every coward like a Cheney or Addington, there were people who refused to hew to the administration's hard-right ideology, questioned its departure from established law on torture and eventually resigned.

Along with Kiko's House, Pruning Shears has been one of the few blogs to make a long-term commitment to covering the torture regime. Here's Dan Fejes' take on those who did not go crazy.
Posted by Shaun Mullen at 1:21 AM
Email ThisBlogThis!Share to TwitterShare to FacebookShare to Pinterest

Shaun, this is one of your finest posts. It is the first time I have seen this topic of torture relating to McCain and the Bush/Cheney duo's definition of what torture is and isn't, made so clear and ridiculous. Great job! And many thanks. I have directed my readers to your Blog today with a tip of thee hat.