Reflections On The Carnage In Orlando: Why They Hate Us More Than Ever 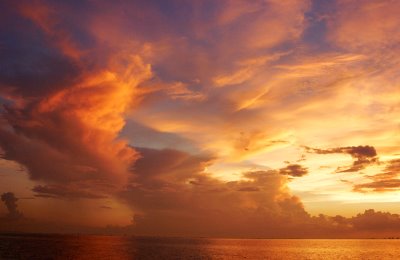 (Although much of this post originally appeared in 2006, it could have been written in the wake of innumerable terrorist attacks, most recently the carnage in Orlando.  That is thought provoking -- and scary.)

It seemed like the whole world was spread out before us from our vantage point atop the sand dune. The gibbous moon was behind our backs, its surreal light casting shadows on beach and ocean. It was still nearly an hour before sunrise, but a sliver of hot pink hugged the horizon to the east. Venus sparkled overhead. Arrayed around it were familiar constellations, dominated by Orion and his brilliant belt.

The Deborah and I settled onto the cool sand. The only sound was the surf, a mere whisper at low tide. Deborah saw the first shooting star of the morning and I the second. For the next half hour or so, these fiery bullets zipped across the northeastern sky at two- or three-minute intervals. Not the most thrilling meteor shower of our experience, but no matter.

The pink sliver had grown and taken on an orange-red by the time the last meteor faded, backlighting an ocean-hugging cloud bank that created the illusion of a distant mountain range. Orion and his companions had evaporated into a brightening blue-gray sky and only Venus, now a faint twinkle, was visible when the flickering lights of a jetliner caught my eye. It was approaching from the east. Probably , perhaps .

The sight of a jetliner high in the sky used to be a thing of beauty for me, a reason to anticipate travels to come and recall travels past. But the lights of the far away aircraft on this morning did not gladden my heart. It inspired only sadness and foreboding.

This, 2006, was going to be the year that I read a lot of fiction, but the rip tide of world events kept sucking me toward weightier tomes on the fanatical religious hegemonists who have so often determined the course of history -- and are at it again.  And have been at it again with numbing regularity.

I'm talking about the right-wing Christianists to whom George Bush sold his soul who saw the war in  in the terms of a holy war. And the Muslim fanatics who want to hijack jetliners like the one we saw on the dune, fly them to our shores and kill people.  Or set off bombs on Paris streets, a San Bernardino office building or sprayed dozens of rounds from an assault rifle into a crowd dancing to salsa and merengue music in an Orlando nightclub until the bodies piled up one on top of the other.

I had finished reading The Looming Tower: Al-Qaeda and the Road to 9/11, Lawrence Wright's magisterial tome, the previous evening and was reflecting on a question that he poses as I watched the jetliner.

Wright asks why the 9/11 hijackers turn against America, a highly religious country -- or at last seemingly so on its face -- that so recently had been their ally in Afghanistan?

"In large part, it was because they saw  as the locus of Christian power. Once, the piety of the Muslim mujahidden and the Christian leaders of the  government had served as a bond between them. Indeed, mujahidden leaders had been considerably romanticized in the American press and had made tours through American churches, where they were lauded for their spiritual courage in the common fight against Marxism and godlessness. But Christianity – especially the evangelizing American variety – and Islam obviously were competitive faiths. Viewed through the eyes of men who were spiritually anchored in the seventh century, Christianity was just not a rival, it was the archenemy.  To them, the Crusades were a continual historical process that would never be resolved until the final victory of Islam. They bitterly perceived the contradiction embodied by Islam’s long, steady retreat from the gates of , where on September 11 – that now resonant date – 1683, the king of  began the battle that turned back the farthest advance of Muslim armies. For the next three hundred years, Islam would be overshadowed by the growth of Western Christian societies. Yet bin Laden and his Arab Afghans believed that, in , they had turned the tide and that Islam was again on the march."

" . . . If  owned the future, the Islamic fundamentalists laid claim to the past. They were not rejecting technology or science . . . But they were ambivalent about the way in which technology weakened the spirit. This was reflected in bin Laden's interest in earth-moving machinery and genetic engineering of plants, on the one hand, and his rejection of chilled water on the other. By returning to the rule of Sharia, radical Islam could draw the line against the encroaching West. Even the values that American advertised as being universally desirable -- democracy, transparency, the rule of law, human rights, the separation of religion from governance -- were discredited in the eyes of the jihadis because they were Western and therefore modern. Al-Qaeda's duty was to awaken the Islamic nation to the threat posed by the secular, modernizing West. In order to do that, bin Laden told his men, al-Qaeda would drag the  into war with Islam -- 'a large scale front which it cannot control.' "

Wright, of course, is not talking about all Muslims, nor am I.  Nor do we understand or will ever know precisely what motivated the Paris bombers, or Syed Rizwan Farook in San Bernardino or Omar Mateen in Walt Disney's town.

After all, nearly one in five people in the world is a Muslim. Neither do I overlook the legitimate grievances that Muslims have with , most of whose political leaders can quote the Christian Bible but cannot differentiate between Shiite and Sunni, let alone understand the underpinnings of the world's largest religion. Apostates all.

But a small minority of Muslims have (pardon the term) hijacked Islam and turned life as we know it on its collective ear.   Islam is the only religion so at war with itself. That enslaves women and hangs gays, and whose most fanatical adherents are mass murderers.  Meanwhile, the more extreme elements of those Shiites and Sunnis have been violently confronting each other for centuries.

Perhaps if more Muslims were as emotionally devastated by the carnage wrought in the name of Islam as we are, their religion and their societies would have a much healthier future, while demagogues like Donald Trump would lose a convenient straw man for their own pathologies.  And it needs to be noted that radical Islam and the National Rifle Association are an especially lethal mix.

Yet in the end, they hate us more than ever.

Guest said...
This comment has been removed by a blog administrator.
2:13 AM

We should raise the message of love and forget the hate because our reality belongs to love. Article and college research paper help only here also should ask people to be lovingly always and that is really amazing view of sky in that photo.

I found this on internet and it is really very nice.
An excellent blog to read.
Great work!
Krogerfeedback
Travel-blog
mybkexperience

Amazing article, thank you for sharing.
How to Start a Great Blog
Somoene Write my Term Papers