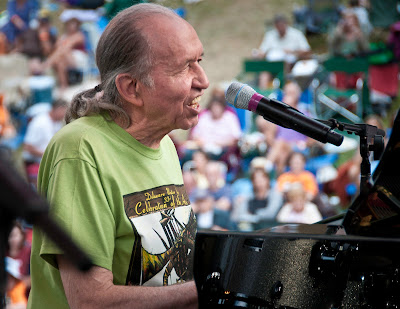 One dark night, when the light was right,
We lost a happy soul due to a strange
Concatenation there of greed, avarice, envy,
Dread and fight.
And the blight began when he went down,
This happy man, this magic town,
Oh, how very strange, this subtle change in
Delaware Water Gap, Delaware Water Gap,
Delaware Water Gap, Pennsylvania.
But now, let me tell you 'bout him, the spirit of Eddie,
L'Esprit d' Joubert . . .
He was a friendly man, he was a busy man,
He ran the Fox, he shook the Gap,
He made it work. He took no crap.
He made you work, he made it hap.
I remember once, with Joubert,
He could be a lazy Pooh bear,
Or he could make it happen like that,
Make it happen right from under his hat.
Fix that floor, move that wall!
The neighbor complained -- She say the
Music's too loud.
It's a rowdy crowd, but we'll do her proud.
Egg crates on the ceiling,
Stifle that wheelin' and dealin'.
Ranting, chanting, raucous heroes,
Blowin' off their steam and neurose
At the Bottom of the Fox, that crazy clientele.
Ah, that clientele -- at the Bottom of the Fox -- the clientele?
A mixture of the best and worst,
The lowest, the highest, the last, the first,
From all the land around the Gap:
Painters, musicians, farmers, 'lectricians,
Roofers, goofers, hikers, biker,
Geeks and freaks, went on for weeks.
A beer, a smoke, a joint, a joke,
A line of jive, another poke,
A line of jook -- (I saw a spook) -- We saw it all, we had a
ball . . . Golly, how I miss those guys.
At the Bottom of the Fox
Where's the light?
The switch was broken by -- that devil out of sight.
And they say that devil had an axe --
Ow-we-woe, Ow-we-woe, Ow-we-woe . . .
Now it's done, and the sands have run,
And so we say goodbye to one who left us with a
Legacy of fun. Didn't he man, he was the one --
Eddie Joubert . . .
There was that magic night,
After hours, oh, so quiet,
In the still, Eddie and Rick and Phil,
Havin' some beers and smokes,
Sharin' the pokes and tradin' the jokes,
Suddenly Eddie spoke, right off the top of his heart,
"Let's do it right here." (Huh?) (What?)
"Right here in the Gap, a little jazz festival of our own.
I'll build a stage 'n' we'll put out a flyer 'n' a map,
And some chairs and blankets and all the artists
Can bring their paintings and maybe some food and the
People will come and we'll see how it goes -- Huh?
(Yeah) -- (Right On!) "Let's get it done!"
"So, you get your horn and you get the charts,"
And there it was born -- The Celebration of the Arts.
In Delaware Water Gap, Delaware Water Gap,
Pennsylvania.

Bob Dorough, backed by his Ambassadorial Trio and The Bottom of the Fox Horns, debuted "The Bottom of the Fox" on September 11, 2010 at the 33rd annual Delaware Water Gap Celebration of the Arts. Dorough is a jazz legend and has woven his vocal and piano magic over seven decades. He plans to record the song on future album. Photo of Dorough debuting the song by Bud Nealy.