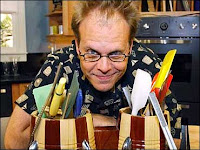 I owe the Food Network a debt. Every time I peel an onion, squeeze a lemon or slice a pepper I do so based on the techniques of the network's many fine chefs, who make those more rudimentary culinary chores so much easier. And I still have all my fingers and thumbs.

But now, in an effort to increase profits and draw in younger viewers, the Food Network is moving away from this kind of programming because, well, it costs more. It has canned Emeril Lagasse and Mario Batali and is increasing reality programming like Ultimate Recipe Showdown while offering more of the chirpy Rachel Ray.

Now I really like Ray even though she does too much with meat (which I don't eat) and not enough with fish and veggies (which I do) for my taste. And while I fear Ray is a sneeze away from bursting her buttons and gaining 20 pounds right before our eyes while preparing one of her quickie dinners, she really is a delight.

Meanwhile, the Food Network apparently is committed to keeping Alton Brown, my biggest chefly fave, for the time being. I hope they understand that to do otherwise would be a recipe for disaster.

Yes, the more Alton Brown we have on TV the better.

I'm sorta scared to think what Food Network could turn into. A channel devoted to food fetishes? It could be! If YOU were going to switch to an all food fetish approach wouldn't the first people fired be Emeril and Mario?? And wouldn't you also promise everyone that we would see "more" Rachel Ray???

I'm tired of watching everyone eat instead of cook. I already know how to eat and I cook pretty well but I'm always looking for new ideas and techniques.

Did you notice that they brought back Tyler Florence and Jamie Oliver? They had been missing for a while but I guess they fit the younger demographics that FN thinks it's looking for.

I love onions, especially with blackbeans and rice. So tell me, what's the onion secret?

The onion thing is more of a trick. You cut off a half inch or so portion of one end of the onion so you can stand it on end while slicing it. This both safer and more efficient.

Here is my own recipe for black beans:

In a large heavy saucepan or skillet, heat oil over moderate heat. Add onion and garlic and saute, stirring occasionally, for 3 minutes. Add peppers and celery and cook 3 minutes longer. Add cumin and oregano and cook briefly, stirring. Add beans, lemon juice, orange juice and rum and salt and pepper to taste and simmer, covered, for 5 minutes. Add some water if needed to thin mixture to desired consistency. Set to low heat, cover and summer for 20 minutes. (I usually double the recipe so I can freeze some of the mixture.)

I serve one of two ways:

* After cooling, combine with a generous amount of Monterey jack cheese in a 10- or 12-inch burrito, which is rolled.

Both the mixture alone and in a burrito freeze quite well.

The burrito should be reheated before serving. I find microwaving each burrito for about 1 minute to warm the corn and then rolling in foil and heating in a 350 degree oven for about 20 minutes before serving is perfecto.